MONTREAL – Posters marked with the words "Passover Against Apartheid" were plastered around the Concordia University campus on Monday, shortly before the start of Passover, promoting an event being held Thursday, April 13 called – you guessed it – “Passover Against Apartheid.” It is being hosted by the groups Solidarity for Palestinian Human Rights,  the Fine Arts Student Alliance (FASA), and the Concordia Student Union.

The four-hour-long event will feature an art exhibit and two discussion sessions. The first is titled “Learn about Passover and BDS!” and invites students to “Come and learn about how Passover can be a time to analyze the oppression in our communities, and practice solidarity with Palestinians in the face of Israel’s apartheid state.”

The second discussion, entitled “Jewish Caucus on Pesach,” is “For those who are part of the Jewish community (religious or secular) and who are interested in discussing a critique of Israel as part of Pesach’s celebration of resistance and struggle. What is it like to spend Pesach within family or spaces of institutional Judaism where it can be difficult to insert a critique of Israel?”

Yes, you've read all of this correctly – the event’s organizers (conspicuously absent are any, you know, Jewish groups) are appropriating a Jewish holiday to call into question Jewish claims to Israel. 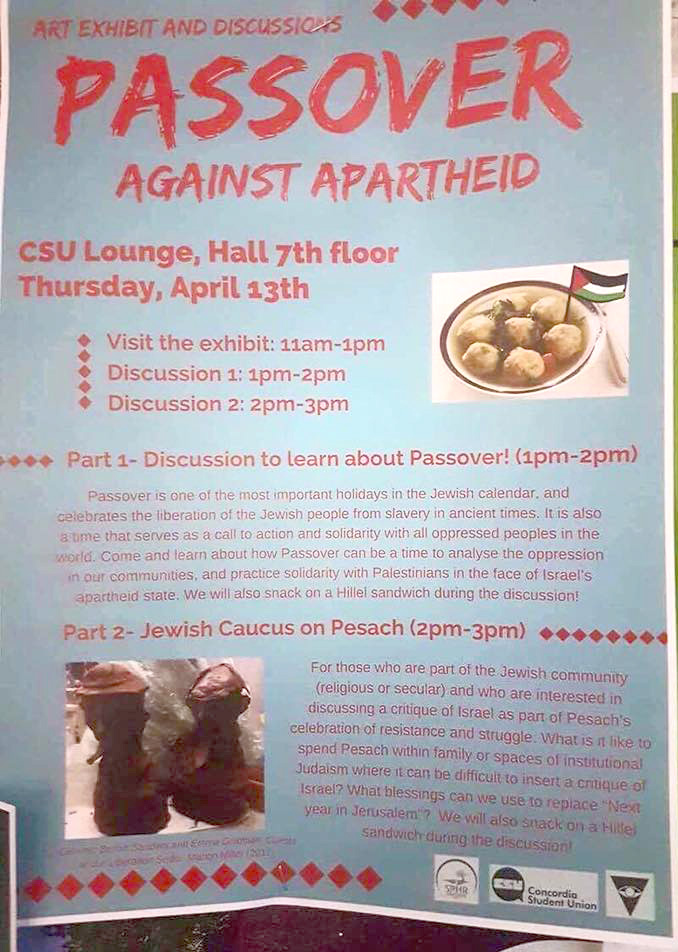 Perhaps what's most offensive, however, is the poster’s call to consider the question, “What blessings can we use to replace ‘Next year in Jerusalem’?

Passover commemorates G-d’s liberation of the Jewish people from enslavement in Egypt, and their subsequent trek to Israel to take their place as G-d’s chosen people. It’s actually a time to commemorate Judaism’s historical ties to Israel – particularly Jerusalem.

The closing of the Passover seder with the phrase “Next year in Jerusalem” is a reflection of the Jewish people’s longing to restore the Temple at Jerusalem so that next year the Passover service could be observed fully as it was intended, and where it began. For example, Dayenu, one of the songs sung during the seder, details the chain of events from the Jews being brought out of Egypt to arriving at their final destination of Jerusalem and to the building of the Temple.

It’s a phrase, more than anything, of hope. To suggest that this biblical phrase, something taught by scholars, sages, and teachers, can and should be replaced is offensive and blatantly antisemitic. Taking Jerusalem out of Passover would be like taking Jesus out of Christmas. Neither holiday exists without them, and no political, civil or religious group has the right to even question their significance.

That Solidarity for Palestinian Human Rights,  the Fine Arts Student Alliance (FASA), and the Concordia Student Union have the the chutzpah to assert that we should make changes to Jewish traditions and Jewish holidays is cultural and religious appropriation, and a crude and ill-informed attempt at that.

While the posters claim to have invited Jewish students on campus, they weren't distributed until late Monday afternoon, hours before Passover began. That makes it pretty clear that organizers were looking to avoid alerting Jewish students or faculty, knowing that by sundown, all observant Jews would be away from campus. And holding the event during Passover further ensures that fewer Jews would be able to attend.

It's actually ironic, because Jews are encouraged to invite anyone and everyone to the Passover seder (as directed by a passage in the Haggadah called "Ha lachma anya"). Rather than actually learn about Passover, these groups host a Passover discussion without notifying or even inviting any campus Jewish groups to help officiate, showing an actual disregard for Jewish culture.

Most importantly, advocating to change a verse in a Jewish biblical text to fit your political agenda and one-sided narrative is an attack on the Jewish religion, and an attempt (like all the others) to rewrite Jewish history and fact.

Sadly, this manipulation of Jewish holidays is nothing new: in March of 2016, anti-Israel activists at McGill University called on Jewish students to cancel their annual celebration of the Jewish holiday of Purim, claiming that it “appropriates” Iranian culture. Purim commemorates the failure of an attempt to exterminate the Jews in ancient Persia, or what is now Iran.

This event really is a disgusting case of antisemitism. That these students would hijack an important religious holiday to try to further a questionable political agenda, with the support of so many campus organizations, shows once again how deeply engrained antisemitic sentiment has become on Canada’s university campuses."

As Harvey Levine, B’nai Brith’s Regional Director for Quebec said, “This is more than Israel bashing. It’s an antisemitic slap in the face to every Jew and I think they crossed the line.”