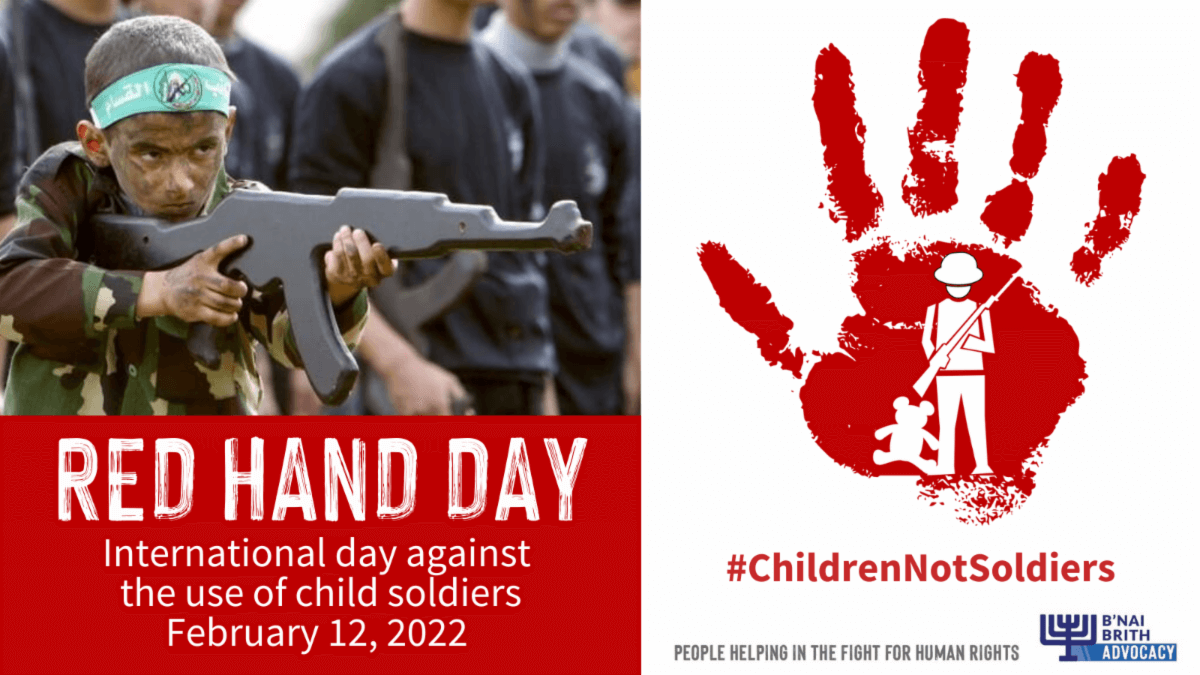 OTTAWA – Red Hand Day, also known as International Day Against the Use of Child Soldiers, is recognized globally this Saturday, Feb. 12, 2022 — and B’nai Brith Canada is taking this opportunity to petition our Government to condemn and take action against this horrific human-rights violation.

The use of child soldiers, particularly in the Palestinian territories and Gaza, has largely gone unnoticed for too long. It must stop.

A 2013 report on children in armed conflict by the U.N. Secretary General revealed that 53 non-state armed groups and six state forces recruit and use children as soldiers where they are routinely exposed to violence, sexual exploitation and psychological trauma. This report did not take into account the Palestinian territories and Gaza.

While Canada has been a leading advocate in the global effort against the use of child soldiers in Africa and Latin America, it cannot ignore the plight of Palestinian child soldiers.

This Red Hand Day, our petition calls on the Canadian Representative in Ramallah to confront the Palestinian Authority and to ensure our aid does not inadvertently support the exploitation of child soldiers.

Largely unknown to Canada and the international community, Palestinian children are being used in violent riots and as human shields. Many have been recruited into terrorist activity, sent to stab people in the streets or used as suicide bombers. Still others are sent to work in attack tunnels, digging in unsafe conditions and leading to the death of at least nine in collapsing tunnels. In addition to these tragedies, those children who survive their ordeal often suffer life-long mental and physical trauma and serious challenges in re-integrating into society.

Children belong in classrooms, in safe environments, protected with their families, not exploited and manipulated by violent extremists.

“The time has come for our Government to acknowledge and speak out against an often-overlooked part of the problem – the plight of Palestinian child soldiers,” said Michael Mostyn, Chief Executive Officer of B’nai Brith Canada. “For too long, attention has been devoted to child soldiers in other parts of the world, while ignoring the suffering of Palestinian children in similar situations.

“We agree with the Canadian Government’s position as specified in the Vancouver Principles, that the use of child soldiers has no place in our world.”