Setting the Record Straight on the IHRA Definition in Ontario 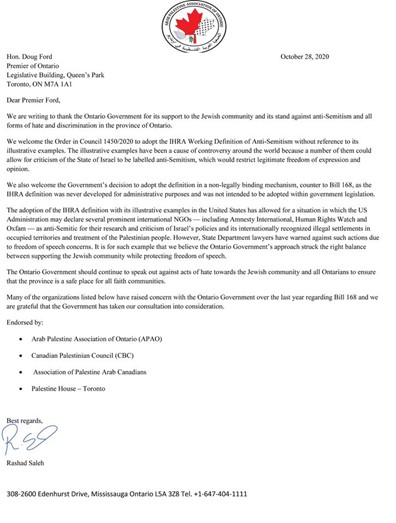 Ontario became the first province to adopt the IHRA Definition on Tuesday. The next day, four Palestinian-Canadian groups sent a letter to Premier Doug Ford, purportedly thanking him for not including the Definition’s illustrative examples, which they alleged “allow for criticism of the State of Israel to be labelled as antisemitism.” They went on to claim that adopting the IHRA Definition via order in council was “a non-legally binding mechanism.”

In fact, Ontario Order in Council 1450/2020 explicitly “adopts and recognizes the Working Definition of Antisemitism, as adopted by the International Holocaust Remembrance Alliance (IHRA) Plenary on May 26, 2016.” IHRA’s May 26, 2016 adoption in turn incorporates the illustrative examples, including those referencing Israel. It also adds that “criticism of Israel similar to that leveled against any other country cannot be regarded as antisemitic.”

“Palestinian-Canadian groups should be honest with their constituents about what has occurred,” said Michael Mostyn, Chief Executive Officer of B’nai Brith Canada. “The Government of Ontario has adopted the leading definition of antisemitism, and has recognized that certain attacks on Israel can and sometimes do cross the line into Jew-hatred.

“The sooner they and all Ontarians internalize this fact, the better.”

The Arab Palestine Association of Ontario, one of the other groups co-signing the letter, functions as the de facto Canadian branch of Fatah, the Palestinian Authority’s leading political party.

On Thursday, B’nai Brith called on the organizers of a July anti-Israel rally in Mississauga to identify attendees who chanted: “Palestine is our country, and the Jews are our dogs!” Amin el-Maoued, President of Palestine House-Toronto, one of the signatories of the letter to Premier Ford, was in attendance at that rally.

Mostyn added: “Not only is the IHRA Definition a consensus issue in the Jewish community, but even mainstream Muslim organizations have adopted it this week – including the Global Imams Council. In the last week alone, the Muslim-majority nations of Albania and Bahrain have also both adopted it. The chants at July's rally are a vivid illustration of why the IHRA Definition is so important and why the lines of what constitutes antisemitism must not be blurred.”