Mississauga Protesters Must Identify “Jews Are Our Dogs” Chanters 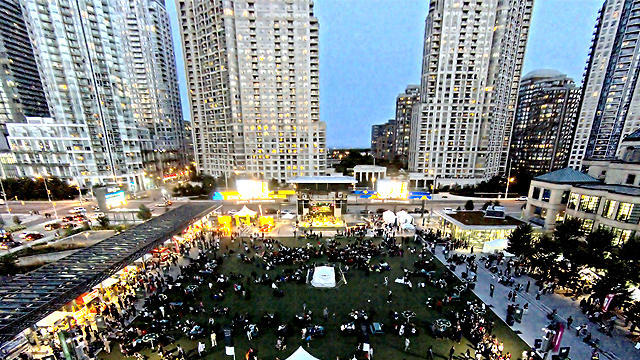 MISSISSAUGA, Ont. – B’nai Brith Canada is demanding that the organizers of an anti-Israel rally in July live up to their commitments and identify attendees who chanted hateful slogans against Jews.

In a July 4 rally at Mississauga’s Celebration Square, attendees were filmed chanting in Arabic, “Palestine is our country, and the Jews are our dogs!,” a hateful slogan that has been used since as early as 1920.

B’nai Brith swiftly filed a complaint with Peel Regional Police, but their investigation has been stymied because rally organizers have denied that they initiated the chant. They have not identified those who did.

In a statement posted to Instagram, the group that organized the protest, “Sauga for Palestine,” admitted that “a select number of protesters” used the antisemitic slogan, contradicting an earlier statement made to Global News on July 9 when it claimed that only one individual was involved.

The Instagram post, made in early July, is not accessible to anyone but the group’s followers. In the post, the group states, “We do not condone antisemitism,” but also describes its event as “otherwise amazing.” It claims that it confronted the attendee who started the “Jews are our dogs” chant and explained why the chant was wrong. However, to date, they have failed to cooperate fully in the identification of the person(s) directly responsible.

The organizers’ Instagram statement contains other dubious claims. It asserts that the protest “was to peacefully stand with Palestinians against annexation and oppression,” but video of the event shows attendees repeatedly calling for Palestine to be free “from the River to the Sea,” i.e. completely replacing the entire State of Israel.

Protesters are also heard chanting, again in Arabic, “We shall sacrifice our soul and blood for Palestine!” and “Martyrs by the millions march to Jerusalem!” Neither of these chants were condemned in the statement.

“We call on the organizers of this protest, as well as any other attendees with knowledge of the situation, to cooperate fully with the police investigation,” said Michael Mostyn, Chief Executive Officer of B’nai Brith Canada. “You can’t say that you ‘don’t condone antisemitism’ while simultaneously shielding purveyors of antisemitism from the consequences of their actions.”

True commitment to the elimination of hate crimes must involve cooperation with affected groups, police and government agencies. We encourage anyone with information about the perpetrators to contact our 24-hour anti-hate reporting hotline. You can call our hotline at 1-800-892-2624, or report your information online by clicking HERE.