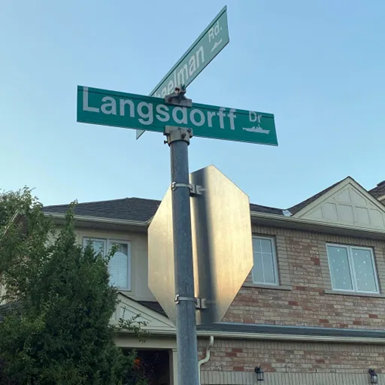 November 11, 2020
B'nai Brith Canada
AJAX, Ont. - As the nation marks Remembrance Day, B’nai Brith Canada is lending its full support to an upcoming motion by councillors in Ajax to rename a street dedicated to a Nazi battleship captain who fought in the Second World War.

At next Monday’s Town Council meeting in the municipality east of Toronto, Councillor Lisa Bower and Regional Councillor Sterling Lee will formally move to initiate the renaming process. B’nai Brith publicized the issue in August and wrote to the mayor and all councillors in Ajax, urging the name change.

"To have a street named after you is an honour. To have that honour bestowed upon a Nazi Captain is unacceptable. Now, more than ever, it's important Ajax does the right thing," Bower said.

"In a time where white supremacy, racism and intolerance [are] on the rise, it's incredibly disappointing we have a street that symbolizes one of the greatest evils in history. I'm proud of Councillor Bower for putting this forward and I'm honoured to second this important change," Lee said.

Langsdorff Drive is named after Hans Langsdorff, who commanded Nazi German forces at the 1939 Battle of the River Plate. The Town of Ajax is named after the HMS Ajax, a British ship that took part in the same engagement.

Langsdorff committed suicide after the battle, leaving a note in which he remarked: “I shall face my fate with firm faith in the cause and the future of the nation and of my Führer.” Langsdorff also lauded Adolf Hitler as “a prophet, not a politician.” Less than a year before Langsdorff made that comment, the Nazi dictator had infamously prophesized that if another world war broke out, "the annihilation of the Jewish race in Europe" would inevitably follow.

"It is embarrassing and inexplicable that a street name in Canada honours a Hitler devotee who fought against this country," said Michael Mostyn, Chief Executive Officer of B’nai Brith Canada. "We call on Ajax Mayor Shaun Collier and the other members of Town Council to unanimously support this motion at next week’s meeting."

B’nai Brith has been extremely active in fighting Nazi glorification in Canada in recent years, working with the town of Lachute, Que. to prevent a local ceremony honouring a Nazi pilot, lending a hand to local residents opposed to “Swastika Trail” in Puslinch, Ont., and partnering with the Canadian Polish Congress to call for the removal of monuments honouring Nazi collaborators in Edmonton and Oakville, Ont.