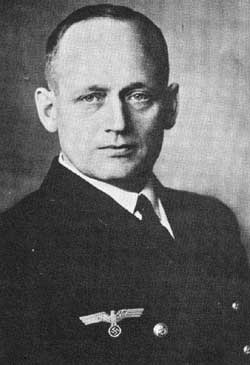 TORONTO – B’nai Brith Canada is urging a Greater Toronto Area municipality to rename a street dedicated to a Nazi battleship captain who fought in the Second World War.

Langsdorff Drive, located in Ajax, Ontario, was named in 2007 after Hans Langsdorff, who commanded Nazi German forces at the 1939 Battle of the River Plate. The Town of Ajax is named after the HMS Ajax, a British ship that took part in the engagement.

After losing the encounter, Langsdorff scuttled his ship off the coast of Argentina, allowing its crew to escape rather than face the British fleet again. He then shot himself, leaving a suicide note in which he remarked: “I shall face my fate with firm faith in the cause and the future of the nation and of my Führer.”

B’nai Brith’s position is that there is no room for monuments or other dedications in Canada honouring Nazi combatants or their collaborators.

In July, Ajax Town Council voted to rename Graf Spee Lane, another street in the municipality named after the Admiral Graf Spee — Langsdorff’s ship at the Battle of the River Plate. It is unclear why the name of the ship was deemed inappropriate while the name of its captain was allowed to remain.

“There is no place for streets honouring Nazi combatants in Canada,” said Michael Mostyn, Chief Executive Officer of B’nai Brith Canada. “While Hans Langsdorff was attacking Allied shipping in the South Atlantic, his comrades were murdering Jews and Poles en masse in occupied Poland. These were inseparable components of the overall Nazi war effort.”

In 2017, B’nai Brith worked with the town of Lachute, Que. to prevent a local ceremony honouring a Nazi pilot. Later that same year, B’nai Brith was asked by local residents in Puslinch, Ont. to convince the local township to rename “Swastika Trail.” Though unsuccessful at the time, residents continue to push for change in Puslinch.

Finally, on July 27 of this year, B’nai Brith joined forces with the Canadian Polish Congress to call for the removal of monuments honouring Nazi collaborators in Edmonton and Oakville, Ont.

An online petition is circulating against Langsdorff Drive in Ajax. B’nai Brith will continue to provide updates as this campaign unfolds.

antisemitism World War II Nazi glorification Ajax Hans Langsdorff Battle of the River Plate
Published : Aug 17, 2020
Do you like this post?
Tweet
Have you experienced antisemitism, racism or discrimination? Report an Incident