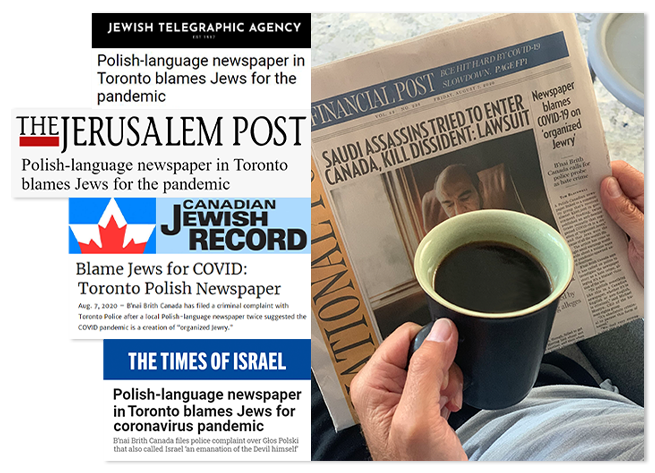 Last week, B’nai Brith revealed that Głos, a Toronto-based Polish-language newspaper, published an article blaming COVID-19 on an imagined Jewish conspiracy, in addition to other antisemitic content. The story received widespread media attention, including a front-page story in the National Post.

A reference to Głos’ predecessor, Głos Polski, appeared on a PNU website suggesting that it was somehow affiliated with the union. The PNU immediately distanced itself from the publication following the National Post story.

As B'nai Brith previously noted, the PNU claims that it severed all ties with the former Głos Polski in 2015. It further claims that Głos is an independent publication with no links to the PNU.

The PNU has now further clarified its position and is unequivocally condemning the antisemitic content of the newspaper:

“The Polish National Union joins with B'nai Brith in condemning antisemitic remarks and messages of hate of any kind,” a PNU spokesperson stated. “The impugned article is false and is rightly to be condemned.”

The statement continued, “The Polish National Union of Canada strongly condemns antisemitic and racist content that appears in the Polish-language newspaper, ‘Głos.’ We firmly denounce any and all content of a hateful or antisemitic nature. Such content absolutely does not reflect our organization, one of Canada’s oldest Polish community-service organizations, and it does not reflect the Canadian Polish community.”

In addition to this statement, the following message now appears on the home page of the PNU's website: “The Polish National Union of Canada is deeply troubled by the antisemitic content that appears in the Polish language newspaper, ‘Głos,’ as reported by National Post and other media. We unequivocally condemn this antisemitic and racist content. The Polish National Union and the Polish community stand in solidarity with our Jewish neighbours.”

These condemnations come just days after another organization, the National Ethnic Press and Media Council of Canada (NEPMCC), banned the publication from its network in response to B’nai Brith’s revelations.

The PNU was not the only major Polish-Canadian organization to condemn the antisemitic articles this week. Zofia Soja, Chair of the Advisory Council of the Canadian Polish Congress, wrote a letter to the editor of the National Post - stating that her organization was “outraged to learn of the virulently anti-Semitic contents of the extremist 'Głos' newspaper” and that they “unequivocally condemn and denounce hatred and antisemitism in all forms.”

Soja also reached out to B'nai Brith, assuring the Jewish community that her organization has no connection with Głos and that its views are not representative of most Polish-Canadians.

“We are pleased that more individuals and organizations are speaking out against the despicable propaganda that was peddled by Głos,” said Michael Mostyn, Chief Executive Officer. “We thank the Polish National Union for doing the right thing and for standing with B’nai Brith on this issue. We hope that all Polish-Canadians and Jewish-Canadians can stand shoulder to shoulder in the fight against all forms of hatred and discrimination.”

As reported last week, B’nai Brith has filed a police complaint against Głos. We will continue to update the community on any new developments that occur as this story unfolds.