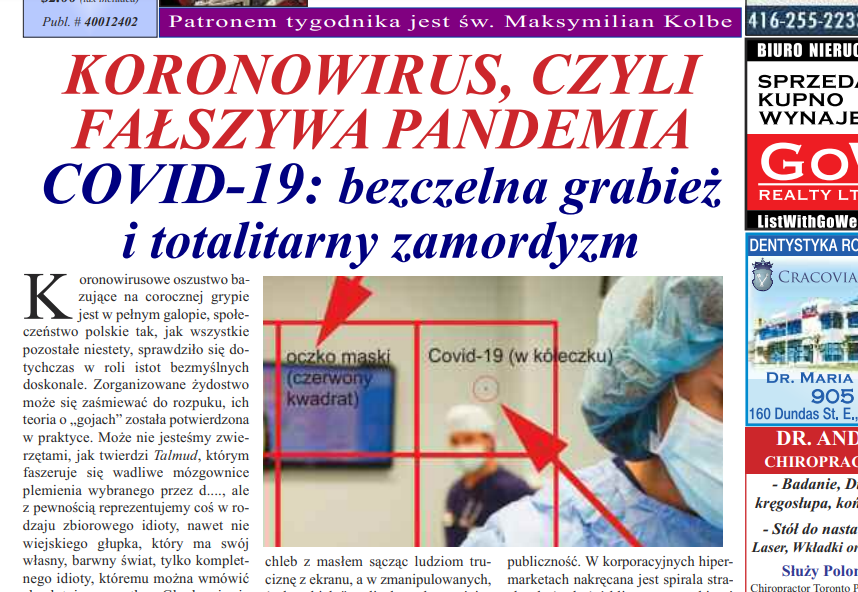 An antisemitic article in a Toronto-based Polish newspaper

The hateful article, entitled “Coronavirus, or the Fake Pandemic,” was the front page story in the March 25 edition of Głos Polski, and was published again in the April 22 edition. Głos Polski is edited by Wiesław Magiera and affiliated with the Polish National Union of Canada, according to the latter’s website.

Aside from blaming COVID-19 on the Jewish community, the article also asserts that “ISIS/ISIL terrorists [were] brought into evil existence by organized Jewry and completely controlled by it,” and proclaims that Soviet dictator Vladimir Lenin, Nazi fanatic Joseph Goebbels and Turkish President Recep Tayyip Erdoğan were/are all secretly Jewish.

The piece also describes Israel as “the cause of all the world’s woes” and “an emanation of the Devil himself,” while simultaneously alleging that Jews intend to take over Poland and create “Judeo-Polonia.”

“Propagating the lie that Jews are responsible for COVID-19 must be met with criminal charges, especially when someone does so repeatedly,” said Michael Mostyn, Chief Executive Officer of B’nai Brith Canada. “This horrifying pandemic has killed thousands of Canadians, ravaged our economy and turned our lives upside-down. Blaming it all on an already disproportionately targeted minority group is loathsome, not to mention a recipe for disaster.”

In June, Andrzej Kumor, the publisher of a different Polish-language outlet based in the Greater Toronto Area, was arrested, warned and released without charge after publishing a string of antisemitic articles.