MONTREAL – It was at least two decades ago that the B’nai Brith office in Quebec initiated an annual event on the steps of Montreal City Hall to commemorate Yom HaShoah. It was well-organized and appreciated, but targeted to a small audience and usually held in cold temperatures.

Coderre was front and centre at previous City Hall events. He became so attached to the Jewish community during his term, leading a mission to Israel and speaking at the community wide Yom HaShoah event, that he was invited to take part in this year’s March of the Living in Poland.

In May, he will begin a new job as an ambassador for the Jewish General Hospital.

Proud to become a witness and participate to the March of the Living 2018. No silence. Never again pic.twitter.com/kOX5gpOXy9

Each year on #YomHaShoah, B'nai Brith Canada proudly hosts the "Unto Every Person There Is A Name" ceremony in #Montreal, an annual tradition for decades.

This year was a truly meaningful event as it teaches our youth about the importance of #Holocaust education and awareness. pic.twitter.com/sRxxefb7mX

Testimony came from Holocaust survivor Eli Dawang, who was born in Paris and stayed hidden during the war. There was complete silence in the room as he spoke about his liberation in July, 1944.

“I was in a little village about 200 kilometres west of Paris,” he explained. “We left in 1943 because it was too dangerous for us to stay. The Germans were in full retreat and they were on motorcycles, trucks and tanks. In our little village everyone stayed in their houses. In the middle of the afternoon we heard some guns, maybe 30 kilometres from our village, and then there was complete silence. A week later, we heard some kind of loud voice. It became louder and louder. Someone dared to open their blinds. It was the Americans. I was 10 years old. It was a feeling of freedom and relief. Of my entire extended family, the only survivors were my father and I. My father did not know I was alive when he was repatriated from Dachau after three years.”

Dawang said that had the war lasted one or two more years longer, “I would not be here to tell my story. I do not know what the future of humanity will be, but we all have to find a way to live together without killing each other.” 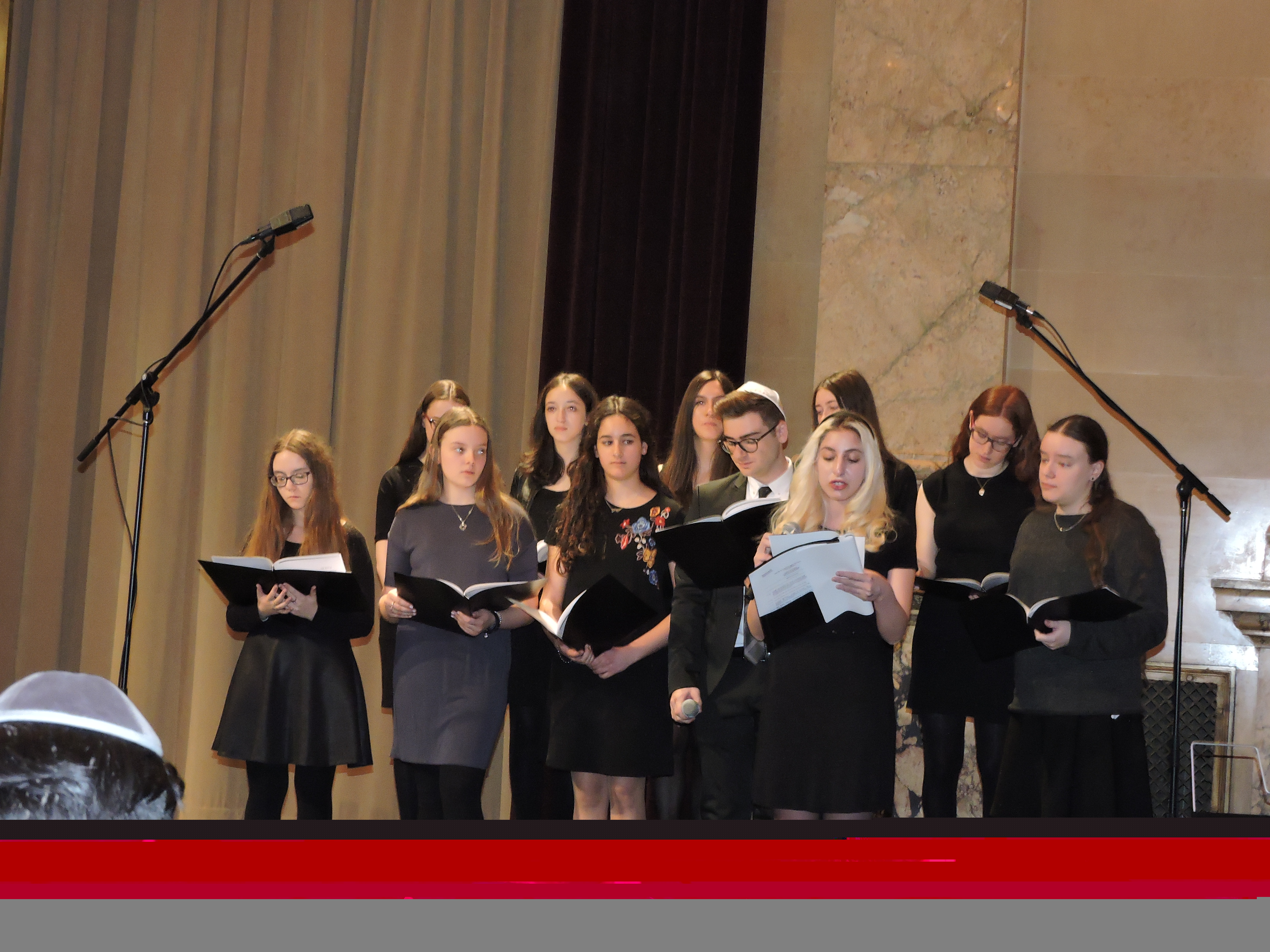 Pollak said that for her, every day she remembers the Holocaust. “Every day I am reminded of this genocide,” she said, her voice breaking. “All four of my grandparents, who are no longer with us, may their memories be blessed, survived the Holocaust. I cannot fathom the strength it took for them to go on, rebuild their lives and raise beautiful families. Yet, the losses are enormous and everlasting – our family tree is amputated. We only know some of the names, going back a generation or two. We have no family heirlooms – no rings or vases, no books or documents to pass down – and few stories.

“My maternal grandfather, Yehuda Stobiecki, was born in Viloin, a small village near Łódź,” Pollak continued. “The Nazis came into Viloin quickly in 1939. His parents decided to send him out to buy bread. He was a young boy with blue eyes, they figured maybe he won’t be stopped. But he was – two German Nazis stopped him on the street, asked him for his name and address and told him to go home and tell his parents they’d be picking him up on Shabbat.  That day, my great grandparents hid him in a closet. When the Nazis came they asked for my grandfather and his parents said he wasn’t home. The Nazis calmly replied, 'Okay, we’ll take a different child then.' My grandfather heard this from his hiding place and came out. He said 'Nein, tatte, mamme, ich vel gein, non papa maman, moi je vais aller.' They took him to a harsh labour camp, he was only 12 years old.

"He never saw his family again – his parents and 13 siblings, nieces and nephews and extended family were murdered in Auschwitz. He suffered through six years in concentration camps. He passed away when I was four years old. I never got to know him.” 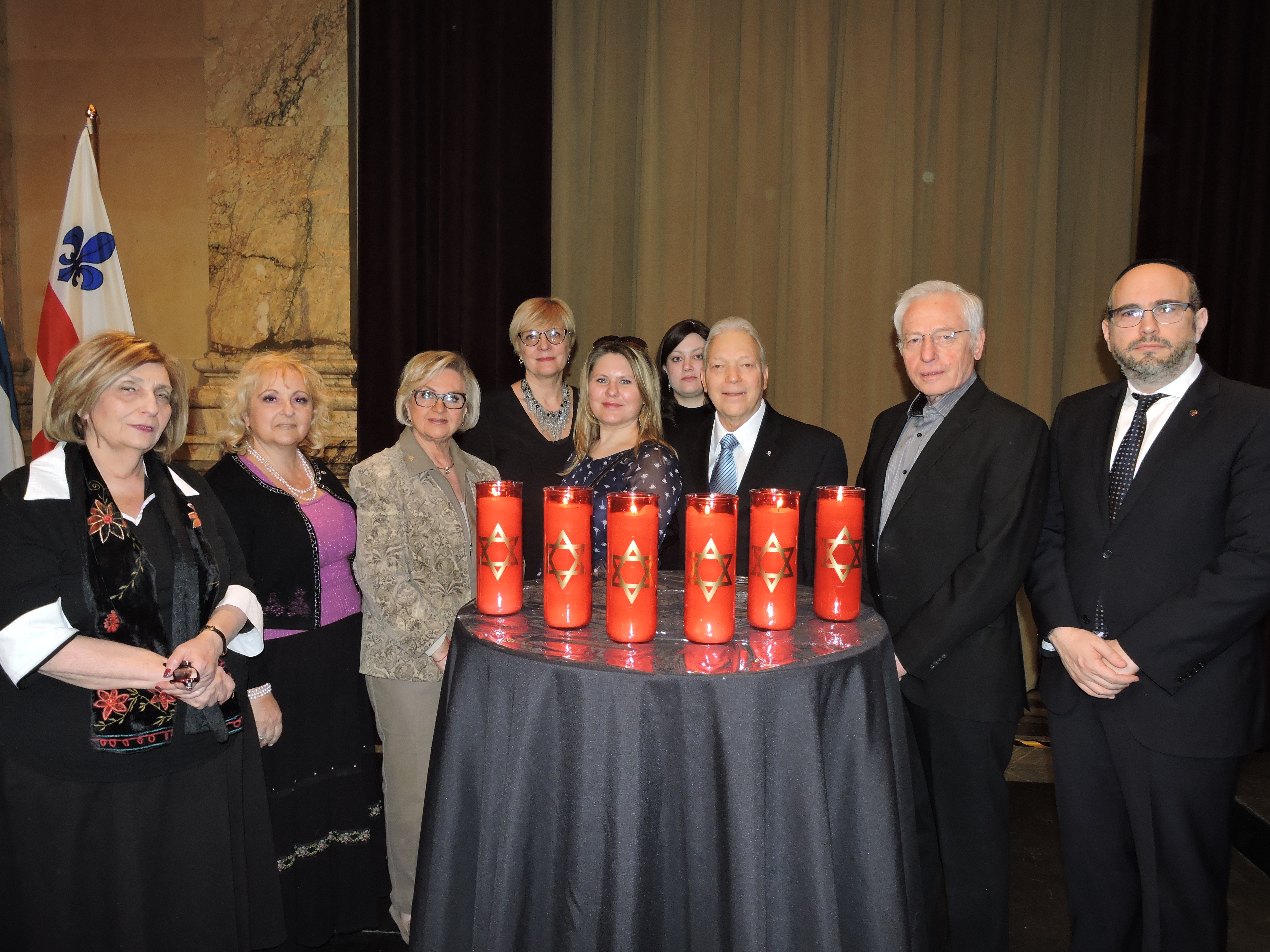 Pollak said she hopes she has been able to make her grandfather proud. “When I was confronted with discrimination, I decided to enter elected politics to fight against intolerance. I did not remain silent. I encourage everyone to do so. If you see an injustice – and this is 2018 – act. This is the best way to commemorate the Holocaust.”

Perez noted that we all have a collective duty to remember the Holocaust. “Let us not presume or think this cannot happen again,” he said. “That is the lesson of today.”

Back to the community-wide ceremony attended by 1,200 people, Couillard was in attendance for the third time by my count, once as the leader of the Opposition. He came in the company of D’Arcy McGee Liberal MNA David Birnbaum. Couillard recognized former Liberal MNA Lawrence Bergman, who was in attendance, for having Yom HaShoah officially recognized in the National Assembly. He praised the Jewish community for its contributions to Quebec society and spoke glowingly about his visit to Israel last spring. 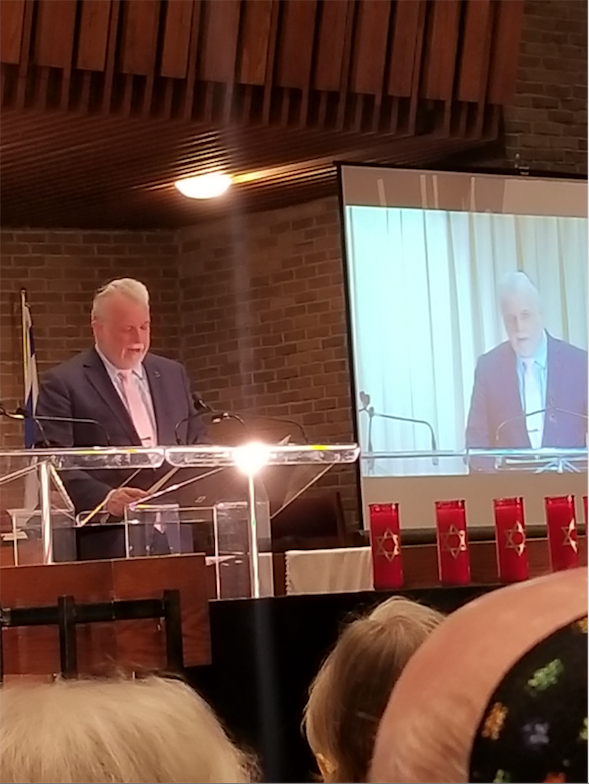 Jeremy Levett, who went on the 2016 March of the Living, shared his experience with the audience. “It is one thing to study the Shoah in a classroom and quite another thing to visit a gas chamber in the company of Holocaust survivors whose families were murdered in that very same gas chamber,” he said. “The survivors’ strength and determination to tell and retell their story and revisit the horrors they had witnessed in lands where the history of their ancestral communities was almost erased, has allowed those who accompanied them to put many things into perspective. We are forever indebted to survivors for their lasting memories, lessons and values that they continue to instil within us. It is now our obligation to continue to pass on their memories and message.”

The Montreal Jewish community and its estimated 4,000 Holocaust survivors have commemorated Yom HaShoah for nearly 70 years. It was declared Holocaust Memorial Day in Quebec in 1999 and in Canada in 2005. Today, the Montreal Holocaust Museum’s Yom HaShoah Committee organizes the commemoration.