This is part one of a B’nai Brith Canada investigation into Imam Zafar Bangash.  To read part two, click here.

In a recent letter, B’nai Brith urged the Canada Revenue Agency (CRA) to revoke the charitable status of the Islamic Society of York Region (ISYR) over concerns it may be misusing its funds as a charitable organization to promote antisemitism. The ISYR is headed by Imam Zafar Bangash, who has advocated for all Zionists (whom he calls “thieves and bandits”) to leave Israel and go “back where they came from: the U.S., Canada, Europe, Russia, or whoever is willing to take them in.”

The CRA has not responded to B’nai Brith’s request.

The ISYR is a Muslim community centre based in Richmond Hill, Ont. It offers prayer facilities and classes. On its website, which features many articles by Bangash, it claims to promote interacting with other faith communities so Muslim youth can “appreciate and respect diversity while upholding their own Islamic values.”

However, as illustrated in our letter to the CRA, the ISYR appears to allow Bangash, an advocate for “Iranian-inspired Islamic theocracies,” to promulgate antisemitism through associated brands. 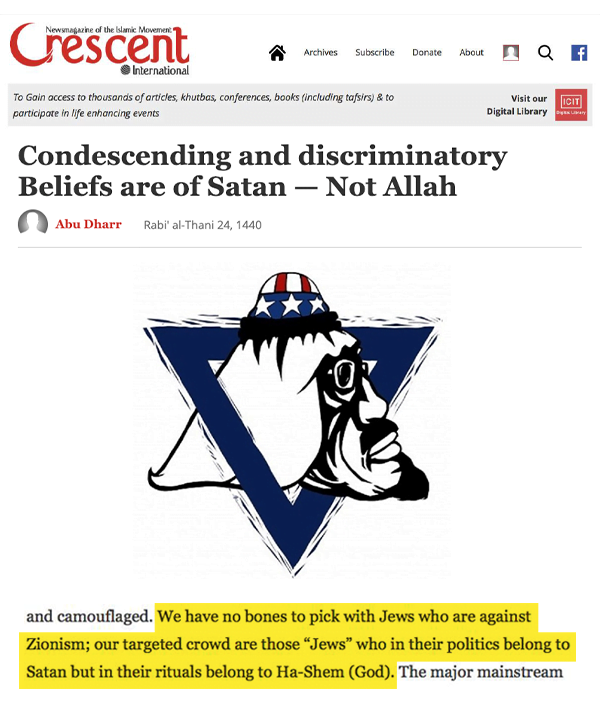 In addition to heading the ISYR, Bangash is on the editorial board of Crescent International: Newsmagazine of the Islamic Movement, a monthly English-language newsmag from the Institute of Contemporary Islamic Thought (ICIT), of which he is director. Crescent features several articles by Bangash himself, as well as notorious U.S. Holocaust denier Kevin Barrett, that in our opinion foment antisemitism.

The publication, which as recently as January 2019 featured an article that states there are Jews who “in their politics belong to Satan,” is distributed throughout North America, the United Kingdom, South Africa and Malaysia.

Crescent and the ICIT are directly linked online, as illustrated in the photo above. Furthermore, the ISYR shares an Ontario-based PO box and phone number with Crescent, demonstrating that all three are connected. 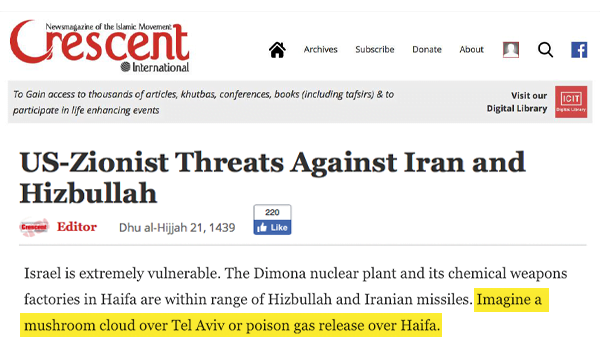 The ISYR has promoted Bangash as the ICIT’s director on its website. The ICIT’s YouTube channel is also rife with antisemitic and xenophobic material.

In a recent issue of Crescent, the editor invites readers to “imagine a mushroom cloud over Tel Aviv or a gas release over Haifa,” fantasizing of a genocide against Israelis. In the same instalment, Muhammad al-Asi, a Washington, D.C.-based member of the publication’s editorial board, directly equates “political Jews” with Zionists, which is critical, as other editions of Crescent use blood-curdling and genocidal language in referring to them.

Al-Asi has also publicly said that “the Jews are blind and deaf and dumb.” In one Crescent article, he writes that “Muslims will deal the deathblow to Yahud (Jews).” 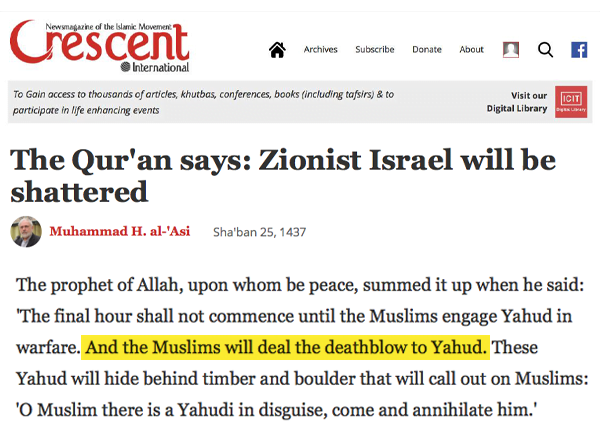 B’nai Brith has reported this and other Crescent articles to the York Regional Police Service. It has launched a full investigation.

In the December 2018 issue of Crescent, Bangash states that even Jews living in undisputed areas of Israel are “illegal settlers.” This instalment also features an article by Barrett in which he alleges that “Jewish political money dominates federal elections” and that the United States is under “Israeli occupation” – both old antisemitic canards.

Articles in Crescent have also promoted slogans targeting members of the LGBTQ community. In one article, a contributor writes that homosexuality is “a contagion that preys on innocent victims,” that it “remains a menace to society and a clear and present danger,” and that homosexuals are “flaunting their depravity everywhere, thereby polluting society.”

Like its newsmagazine, the ICIT has published many offensive and antisemitic items on its YouTube channel, including that Jews “control” the media and that the death toll of Jewish Holocaust victims is exaggerated.

In one YouTube clip, a commenter claims that Israelis are the most “antisemitic group on the planet.” The comment was met with admiration (specifically, a heart emoji) from the ICIT. 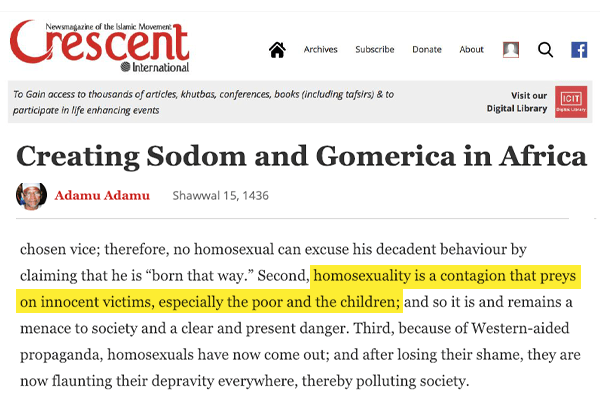 “The ISYR is clearly linked to both Crescent and the ICIT, which, in our opinion, have been spreading anti-Jewish vitriol and inciting hatred for decades,” Mostyn said. “Registered charities in Canada cannot be allowed to promote antisemitic libels and homophobic tropes through association. Canada should not be used as a centre to radicalize Muslim youth around the world.”

He added: “We call on the CRA to immediately revoke the ISYR’s charitable status.”

This is an ongoing investigation – B’nai Brith will continue to expose the web of antisemitism surrounding Bangash, Crescent International and the ICIT.