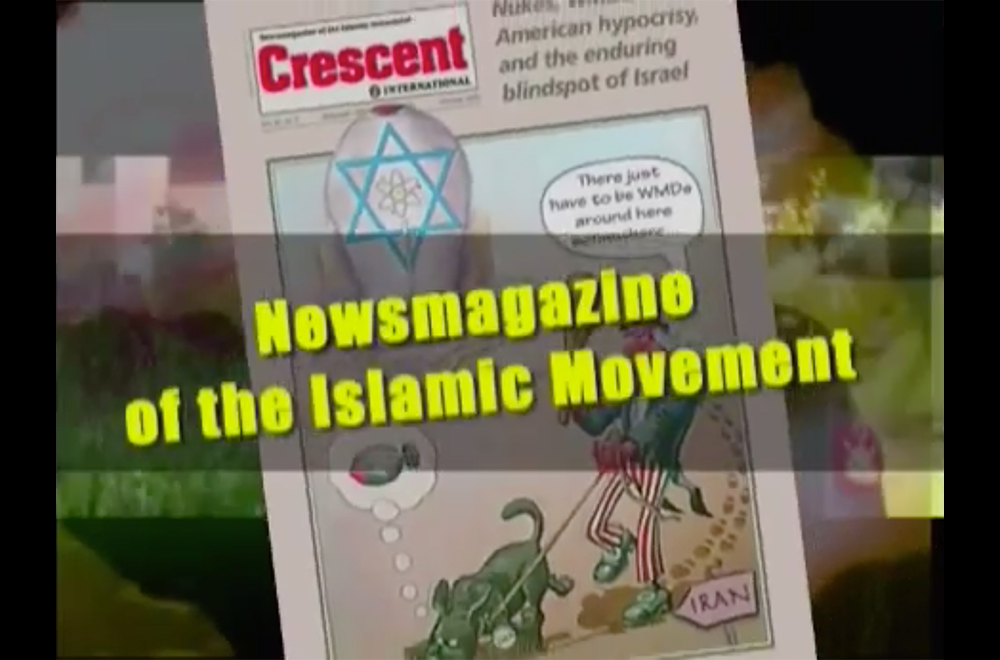 Bangash, an Iranian-regime apologist who has decried the “inherent racism of European and North American immigrant Jews,” is on the editorial board of Crescent International: Newsmagazine of the Islamic Movement and serves as Director of the Institute for Contemporary Islamic Thought (ICIT).

Both have promulgated hateful content targeting members of minority groups such as the Jewish and LGBTQ communities.

As the host of Muslim Perspectives, a television show operated by the ISYR and broadcast on Vision TV across Canada, Bangash has also given a platform to antisemitic and conspiratorial viewpoints.

Muslim Perspectives regularly encourages its viewers to subscribe to Crescent International. The show also has featured discussions in which xenophobic conspiracy theories were raised and attempts made to legitimize terrorist organizations, such as Hezbollah.

In a recent episode, Muhammad al-Asi, a regular contributor to the program, imagined a scenario in which Hezbollah launches 130,000 missiles at Israel, which would result in “the total destruction of the Israeli nation-state.”

In an article published in Crescent International, al-Asi also wrote that “Muslims will deal the deathblow to Yahud (Jews).”

B’nai Brith recently submitted a complaint to Vision TV about the abuse of the Muslim Perspectives program in promoting antisemitic and anti-Israel rhetoric.

In response, Vision acknowledged that such content was problematic and committed to pre-recording episodes of the program for review prior to being aired, to ensure that no further violations of the station’s policies or Canadian broadcasting standards occur.

While B’nai Brith appreciates this effort, our opinion is that this response falls short of Vision TV’s corporate responsibility.

Vision must abide by the Canadian Association of Broadcasters Code of Ethics, Standards and Practices, as it claims it does on its website, and sever ties with Muslim Perspectives and its host, Imam Bangash, in light of his ongoing association with known antisemites such as Kevin Barrett and promotion of antisemitic stereotypes.

B’nai Brith has also lodged a complaint with the Canadian Broadcast Standards Council (CBSC) over its concerns about Muslim Perspectives.

To sign our petition calling on Vision TV to immediately remove this program from the airwaves, click here.

Zafar Bangash Crescent International The Islamic Society of York Region Imam Zafar Bangash Muhammad al-Asi
Published : Feb 27, 2019
Do you like this post?
Tweet
Have you experienced antisemitism, racism or discrimination? Report an Incident