B'nai Brith and Chanukah: A Community Celebration Across Canada 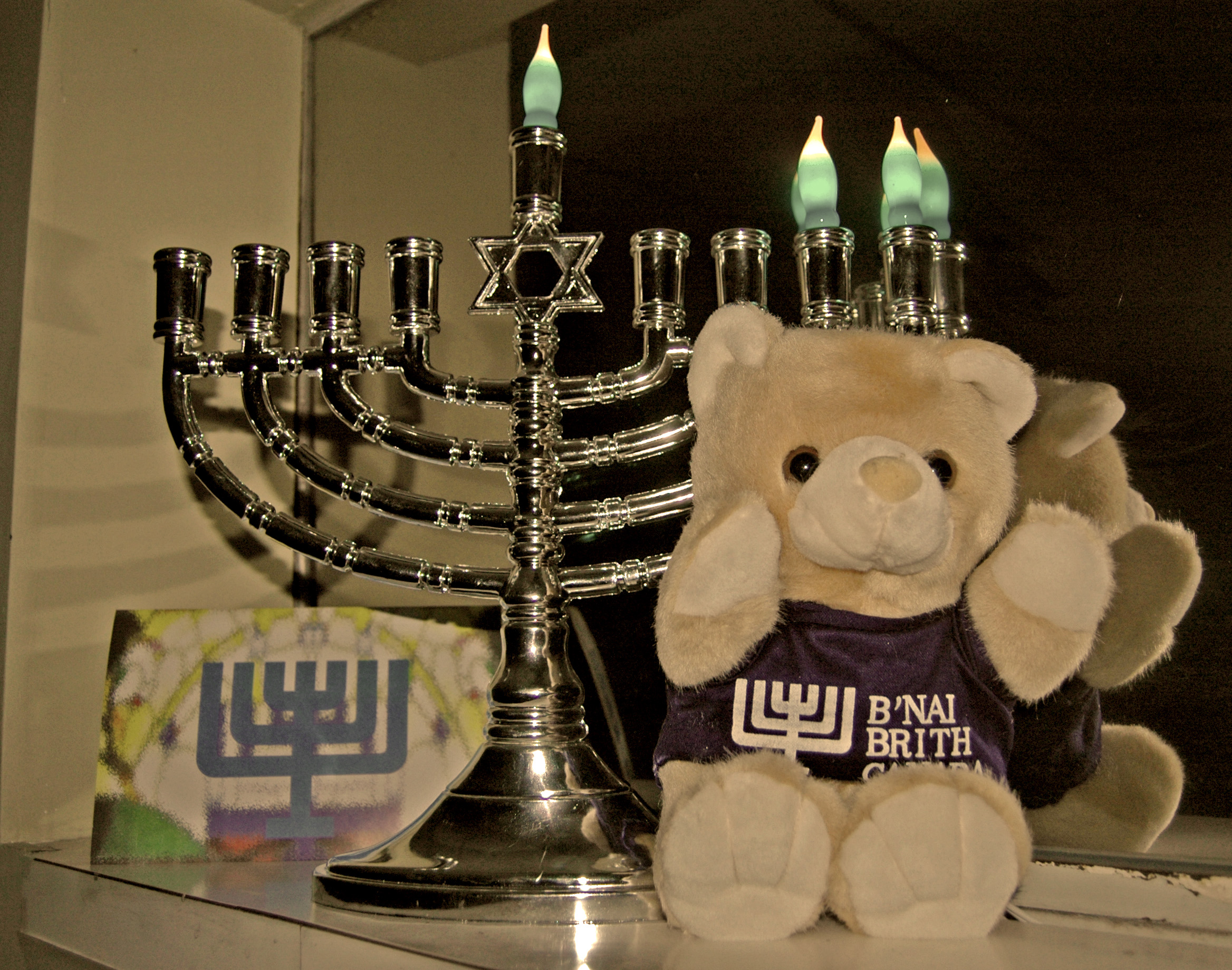 You don't have to look to far to see that Chanukah is a really big deal to us at B'nai Brith Canada. It's literally in the logo.

The holiday represents a rededication to Jewish life and values, and to the Holy Temple of Jerusalem. As always, B'nai Brith representatives and volunteers celebrated as we do every year: by immersing ourselves in our values and customs. This included delivering gift bags for the needy, singing songs and lighting candles with the sick and elderly, and participating in community celebrations.

Gift bags for the needy

The Chanukah Gift Bags Program is a cornerstone of B'nai Brith's community services and initiatives. Every year, during the holidays of Chanukah and Purim, volunteers of all ages join us to pack and deliver gift bags to the most vulnerable members of our community, including residents at B'nai Brith's affordable housing buildings. This year, volunteers young and old packed over 1,000 bags full of food and other supplies to those in need across the Greater Toronto Area.

Wow! Last night we had over 30 volunteers in Toronto help us pack over 1,000 #Chanukah gift bags for the needy! Thank you so so much to all those who volunteered. What an amazing mitzvah! pic.twitter.com/kEyAXPwEHU

We were also very thrilled to have MP Michael Levitt (Lib-York Central) join us and help distribute the bags, and appreciate his constant support and dedication to the betterment of the Canada's Jewish community.

A great way to start day w/ @bnaibrithcanada heading out to help deliver over 1,000 #Chanukah food baskets to those in need in our community. #ChagSameach #YorkCentre #cdnpoli pic.twitter.com/dDyO8o0OBV

Our Chanukah Gift Bag Program was also on display in Winnipeg, where volunteers braved the cold to pack and deliver food bags across the city.

We want to give a really huge thanks to all of our amazing volunteers in Winnipeg who helped pack and deliver #Chanukah gift bags for the needy. And a big shoutout to the BBYO girls chapter for making homemade cookies for the bags! pic.twitter.com/wvtFpd77yB

Community members young and old made tremendous contributions. Even this little guy got in on the action.

You're never too young to be a B'nai Brith volunteer. #Winnipeg #Chanukah #HolidayHelpersFoodDrive #HolidaySpirit pic.twitter.com/7H8ffuYlGV

Candle lighting at the Jewish General Hospital in Montreal 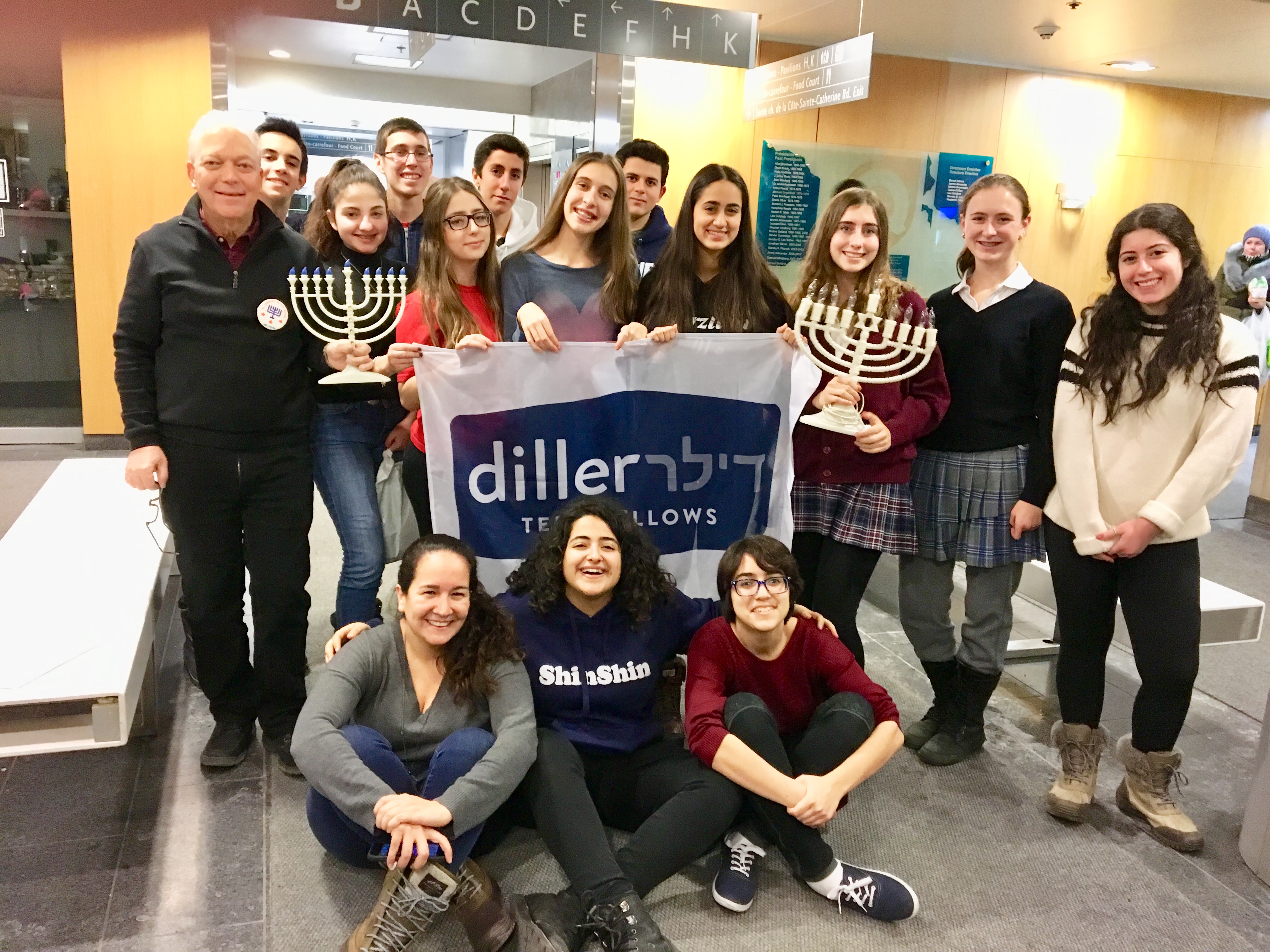 For over 40 years, B'nai Brith and volunteers from the Montreal community have come together to light Chanukah candles at the Jewish General Hospital.

This year, of course, was no different.

In what was truly a beautiful display of solidarity, Montrealers rose to the occasion this week to light candles and sing songs with patients at the JGH who otherwise wouldn't have been able to enjoy the Chanukah holiday.

Volunteers also visited with the sick and elderly.

Looks like everyone had an amazing time at our seniors program #Hanukkah party yesterday afternoon! pic.twitter.com/KWCmTySbSJ

Every weekday, B'nai Brith hosts a subsidized seniors program at our national headquarters at 15 Hove St. in Toronto. Participants are not only provided a nutritious lunch but they also engage in a variety of programs, such fitness classes, bingo, health and wellness workshops and many more! This year, we had a massive Chanukah party for our seniors on Dec. 19.

In addition, our seniors also got a chance to watch a very special choir performance:

In Montreal, B'nai Brith hosted a festive musical Chanukah party at the Adath Israel Congregation in the city's Hampstead neighbourhood. The event is the first of a new musical-themed program for Quebec seniors.

Meanwhile, in Winnipeg, B'nai Brith participated with the local Yachad unit in throwing a party at the the Saul and Claribel Simkin Centre, which is a personal care home for Winnipeg's Jewish community.

We want to thank the Saul and Claribel Simkin Centre and Yachad in #Winnipeg for including us at your fantastic #Hanukkah party yesterday. The Jewish community is forever grateful for your presence and vital contributions #chesed pic.twitter.com/dcKUetvXqU

For more information about our Seniors' Programming as well as volunteering opportunities, please call Amy Leifer at 416 633 6224 ext 134 or email aleifer@bnaibrith.ca

Another amazing #Hanukkah party to wrap up a fantastic holiday! So thrilled residents of one of @bnaibrithcanada's affordable housing buildings in Toronto could enjoy some holiday fun :) pic.twitter.com/v9frbDhJnc

Similarly to our seniors parties at B'nai Brith HQ, our organization also organized Chanukah parties for residents of its affordable housing buildings in Toronto. These parties are great opportunities for neighbours to spend some time together while basking in the glow of Chanukah joy. 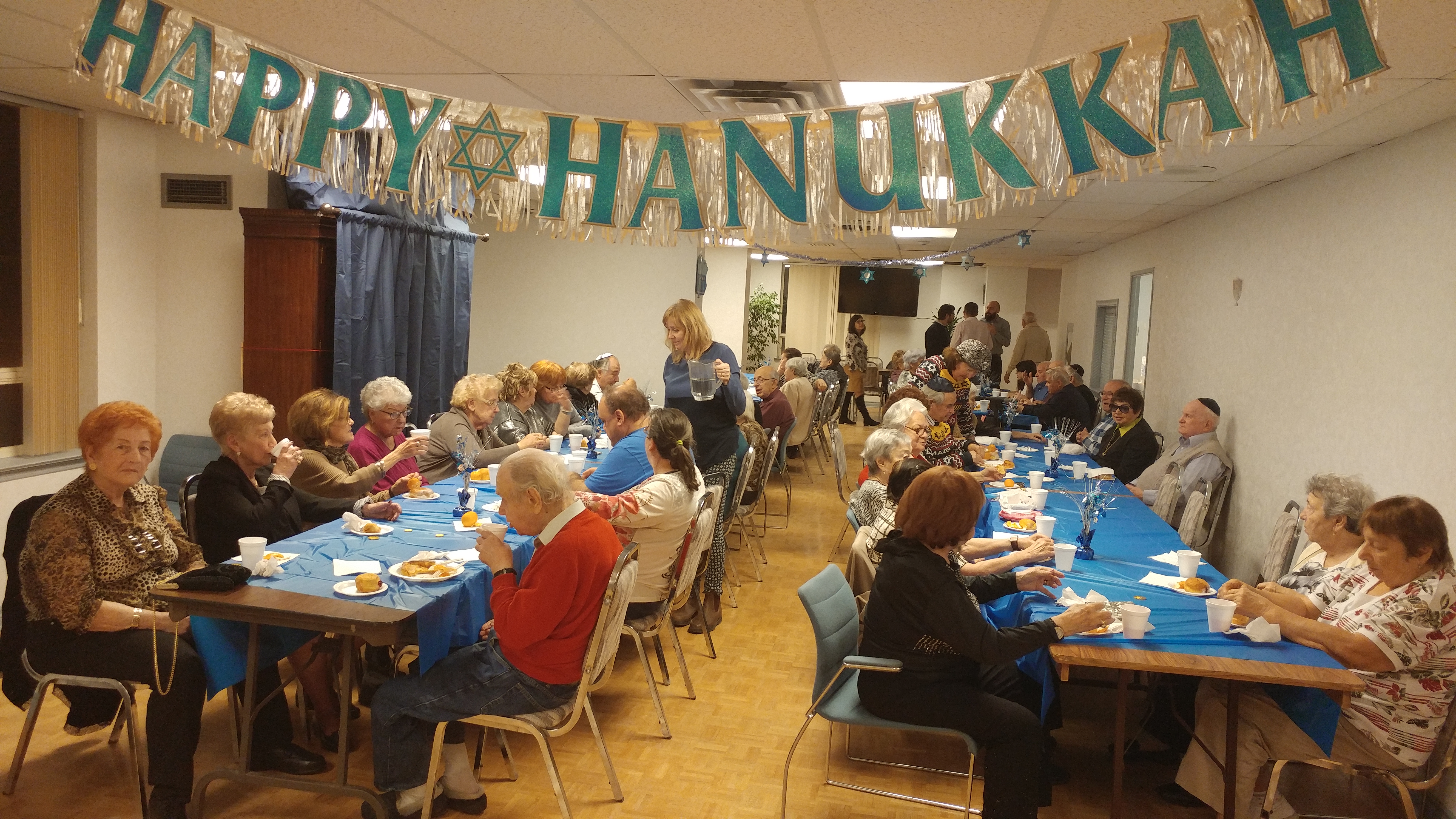 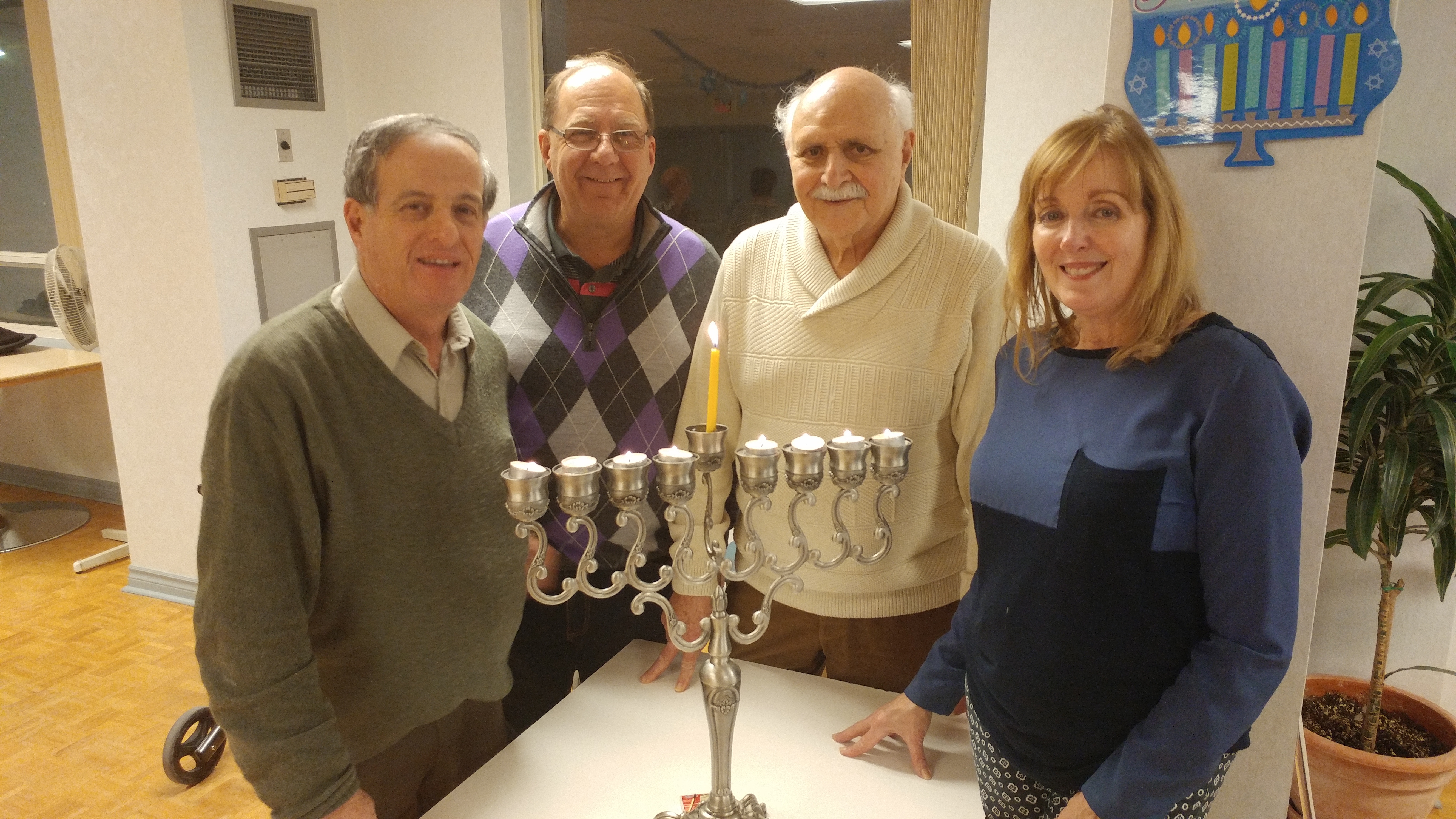 Attendees and volunteers at the Chanukah party at the 4300 Bathurst Street affordable housing building.

As we do every year, B'nai Brith was proud to participate in candle-lighting ceremonies alongside our elected officials across the country.

Our first ceremony took place on the first night of Chanukah at the newly minted National Holocaust Monument in Ottawa. Organized by the Canadian Federation of Chabad Lubavitch, many Holocaust survivors, dignitaries and community leaders joined together to a truly inspiring ceremony.

With my #Montreal colleague, Harvey Levine, proud to light a #Hanukkah candle for @bnaibrithcanada in parliament. Thanks go to @LevittMichael @AHousefather. pic.twitter.com/uSjgStTV2O

Here's Bnai Brith Canada Chair of the Board @JayTrustee at last night's #Chanukah on the Hill celebrations in #Ottawa! pic.twitter.com/CxXjBzQ845

The celebrations continued on the third night of Chanukah, where B'nai Brith was invited to a ceremony at Stornoway, the residence of the Official Opposition Leader Andrew Scheer.

B'nai Brith representatives were also very fortunate to meet with some of our elected officials to discuss important issues facing the Jewish community. All in all, it was a magnificent holiday, which we were proud to celebrate with the members of our community. Thank you once more to all those who participated, attended, and volunteered with us during the holiday season.

We can't wait to do it all again next year!