What We Told the Interparliamentary Task Force on Online Antisemitism 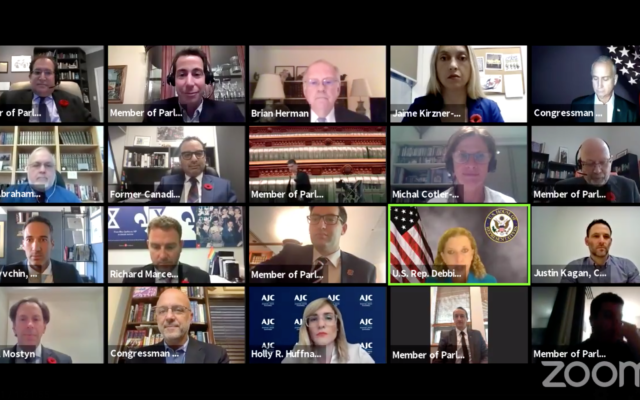 An image from the Task Force's first meeting (Times of Israel)

The Task Force, which includes influential Canadian parliamentarians from the major parties as well as partners from Israel, Australia, the United Kingdom and the United States, provides a mechanism to underscore the role of legislators in shaping the public discourse and press governments to act.

B’nai Brith has long made its stance clear — combating antisemitism begins with understanding its origins and how it manifests itself online.

The most pernicious forms of antisemitism facing society today are promoted within the online space — whether through platforms such as Facebook and Twitter that engage us daily or through other platforms on the fringes of the internet.

While social media and the internet have become useful tools in bringing the world closer together, they have also increasingly been used as vehicles for spreading hate, intolerance and antisemitism.

Misinformation and hate speech on the internet has often led to physical, psychological and political harm toward Jewish communities. These are the trends we must fight.

In its testimony, B’nai Brith Canada asked the Task Force to embrace the following ideas, among others:

“Our testimony before the Task Force is just one of many steps we are taking to encourage greater awareness of online antisemitism and how to deal with it,” said Brian Herman, B’nai Brith Canada’s Director of Government Relations. “These ideas build on the important 2019 report from Canada’s House of Commons on recent consultations we have had with the Department of Justice, and on B’nai Brith Canada’s submission to the Canadian Commission on Democratic Expression.”

“We commend the Interparliamentary Task Force for its diligence in tackling the exploding problem of online antisemitism,” said Michael Mostyn, Chief Executive Officer of B’nai Brith Canada. “There have been some clear signs that social media platforms are gradually coming around.

“But stronger action is still required by them in order to properly confront antisemitism, as well as Holocaust denial and distortion. What we need is greater transparency and a chance to provide input to their policies. If necessary, governments and civil society must exert a leadership role. The Jewish community is absolutely ready to contribute to these efforts.”