U of T Must Resist Pressure Campaign 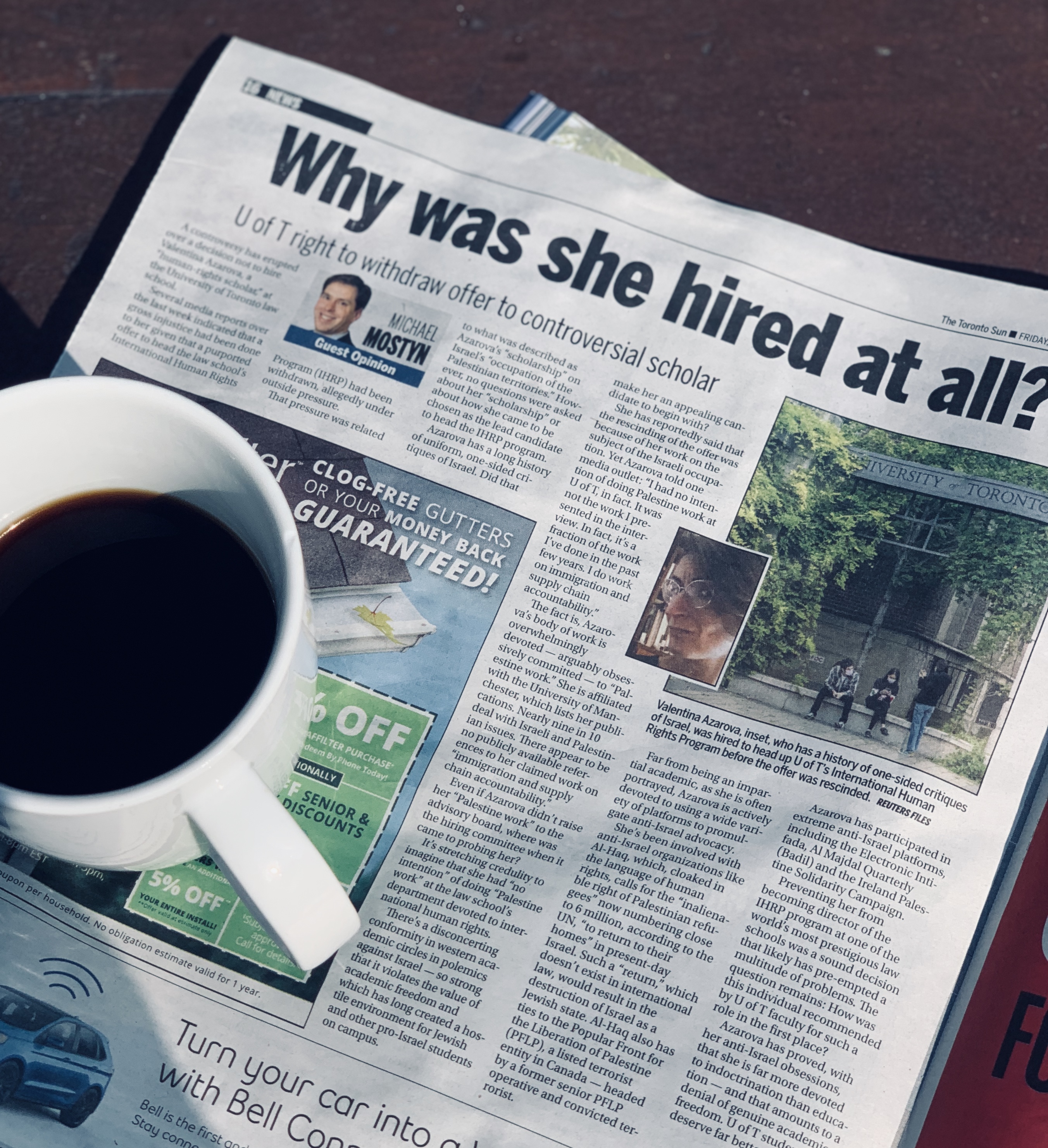 TORONTO – B'nai Brith Canada is encouraging the University of Toronto to resist a pressure campaign demanding it hire an anti-Israel activist with ties to an organization closely linked to a terrorist group.

Valentina Azarova, who has been painted by several news reports as a harmless "human-rights scholar," was allegedly under consideration for a position heading the International Human Rights Program (IHRP) at U of T's law school.

The alleged rejection of her candidacy caused tremendous international controversy and anger on the part of anti-Israel activists, who asserted that the decision did not respect the value of academic freedom.

Many well-meaning individuals have accepted this claim and believe this to be a question of academic freedom — thanks in large part to one-sided media coverage that several newspapers have given the story, in which key aspects of Azarova's background were not mentioned. As a result, many are demanding that U of T now offer the position to her.

However, the real danger to academic freedom and integrity would be permitting the misuse of a university program for the advancement of a radical political agenda on campus. B'nai Brith is now ensuring that the other side of the story is told.

Sun newspapers across Canada published B'nai Brith CEO Michael Mostyn’s views in a strongly worded op-ed that first appeared on their website. It states in part:

Azarova has a long history of uniform one-sided critiques of Israel...She has reportedly said that the rescinding of the [alleged] offer was because of her work on the subject of the Israeli occupation. Yet Azarova herself told one media outlet: “I had no intention of doing Palestine work at U of T, in fact. It was not the work I presented in the interview. In fact, it’s a fraction of the work I’ve done in the past few years. I do work on immigration and supply-chain accountability.”

The fact is, Azarova’s body of work is overwhelmingly devoted — arguably obsessively committed — to “Palestine work.” She is affiliated with the University of Manchester, which lists her publications. Nearly nine in 10 deal with Israel and Palestinian issues. There appear to be no publicly available references to her claimed work on “immigration and supply-side accountability...”

Far from being an impartial academic, as she is often portrayed, Azarova is actively devoted to using a wide variety of platforms to promulgate anti-Israel advocacy...Azarova has participated in extreme anti-Israel platforms including the Electronic Intifada, Al Majdal Quarterly (Badil), and the Ireland Palestine Solidarity Campaign.

In addition to her apparent personal bias, Azarova's former organization has links to a recognized terrorist group which has been responsible over the years for the deaths of countless Israelis and Jews, as well as multiple Canadians such as Howie Rothman and Lonna Sabbah. Azarova’s CV states that she was previously employed as al-Haq's External Legal Advisor and Senior Editor between August 2013 – January 2014, prior to which she served as Senior Legal Researcher from June 2010 – December 2011. Al-Haq is closely tied to the Popular Front for the Liberation of Palestine (PFLP) — a listed terrorist entity in Canada.

Al-Haq’s director since 2006, Shawan Jabarin, is a former senior operative of the PFLP who served multiple prison sentences for terrorist activity. The organization focuses much of its efforts, among other things, on promoting the antisemitic Boycott, Divestment and Sanctions (BDS) campaign — a movement that is seeking to gain ground on North American university campuses and to attract more students to its extremist philosophy. The BDS movement has been condemned by the Parliament of Canada.

As a result of its ties to the PFLP terrorist group, al-Haq had its credit card donations terminated by Visa, Mastercard and American Express in 2018.

Yet somehow, most mainstream media outlets failed to mention her history with this controversial organization.

Azarova has publicly suggested that the bulk of her work does not relate to the Israeli-Palestinian conflict. However, her own resume states that both her paid and pro bono work related “mainly on Israel/Palestine related issues [sic]…”

"Ms. Azarova is seeking a position that requires fairness, honesty and academic integrity," Mostyn said. "But her uncompromising activism, in our opinion, would be a defeat for academic freedom on campus.

"Public opinion is changing now that we are presenting the other side of this story for the first time. We expect that this will continue, and that U of T will stand firm against the current lobbying campaign."

Over the last year, U of T President Meric Gertler has committed to taking antisemitism more seriously at the school. Following a high-profile antisemitic incident involving a student union representative suggesting that access to kosher food on campus should be denied on the basis of Jewish support for Israel, a committee of U of T professors formed to combat antisemitism on their campus. Gertler has since met with this committee alongside B'nai Brith leadership to discuss ways of improving this hostile environment.

B'nai Brith invites members of the public to contact U of T to express their views on this matter, and to remind them that academic institutions must hold all potential faculty members to an academic standard befitting of the important influence they play in our society.

antisemitism BDS terrorism PFLP campus U of T Meric Gertler al-Haq Valentina Azarova
Published : Sep 25, 2020
Do you like this post?
Tweet
Have you experienced antisemitism, racism or discrimination? Report an Incident