U of T Student Union Ordered to Abandon BDS 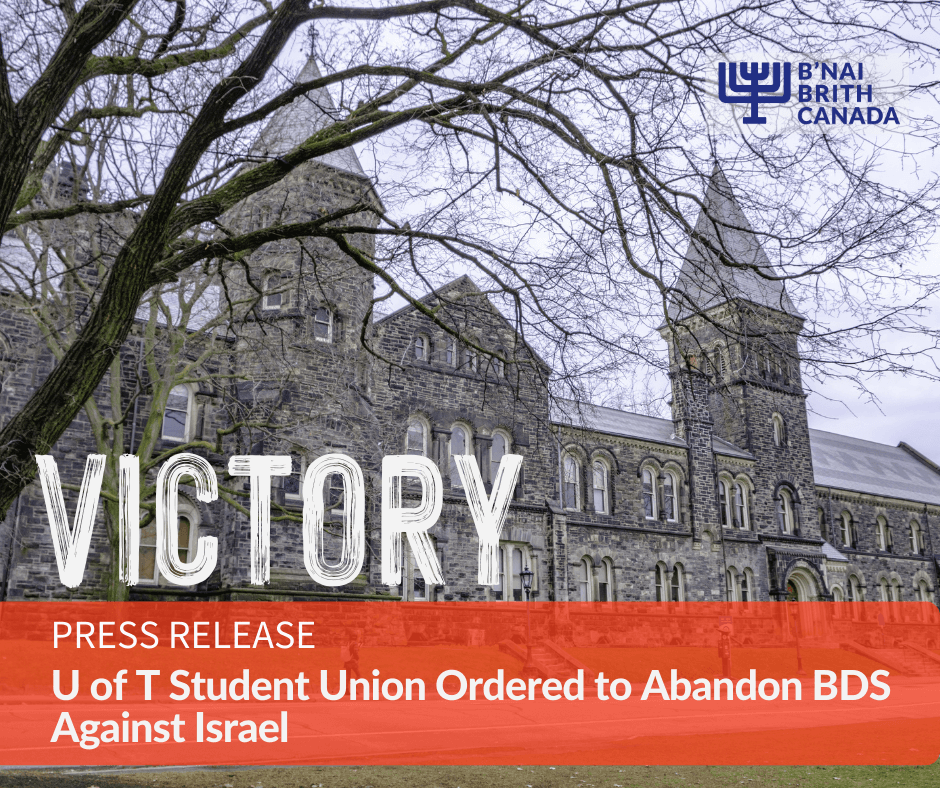 TORONTO – In a landmark ruling – the first of its kind in Canada – the University of Toronto Graduate Students’ Union (UTGSU) has been told by a university panel to stop using student fees to promote the anti-Israel BDS movement.

In the ruling released Thursday, the Complaint and Resolution Council for Student Societies (CRCSS), a body created by the University but composed of students, found that the UTGSU’s BDS Caucus had engaged in discrimination based on nationality, in violation of its own Anti-Discrimination Policy. The CRCSS then issued five recommendations to the UTGSU, including revising its bylaws to prevent boycotts based on nationality, making the BDS Caucus student fee refundable, and revising its Anti-Discrimination Policy to align with the Ontario Human Rights Code.

If the UTGSU does not outline how it will implement the recommendations by March 1, and fully implement them within one year, the University’s Vice-President and Provost may withhold the student union’s compulsory fees.

The successful complaint was brought by Jewish U of T graduate student Chaim Katz, with the assistance of B’nai Brith Canada. It comes as the culmination of five years of dogged activism by Katz against the UTGSU’s BDS policy and antisemitism on campus.

In 2016, the Judicial Board of the Students’ Society of McGill University similarly ruled that BDS was discriminatory and that the student union could not legally endorse it. However, Thursday’s ruling marks the first time that a Canadian university has ordered a student union not to promote BDS.

“This is a massive victory for Jewish students at the University of Toronto and across Canada,” said Michael Mostyn, Chief Executive Officer of B’nai Brith Canada. “B’nai Brith will continue its fight against antisemitism at U of T in all of its forms, until Jewish students and faculty are safe from every form of discrimination.”

“Today is the day that I hoped would come for more than five years,” said Chaim Katz, the student behind the complaint. “I thank B’nai Brith for its constant and unwavering support. The students and community members I have had the privilege to work with were instrumental in reaching this day. I expect the University to implement this ruling without delay.”

The UTGSU is the only student union in Canada that forces all members – even Jewish and Israeli students – to fund a Boycott, Divestment and Sanctions (BDS) Caucus that uses student fees to attack the Jewish State. Over the past year and a half, two of its executives have resigned over allegations of antisemitic conduct.

Thursday’s ruling came just two days after an op-ed by Mostyn and U of T professors Stuart Kamenetsky and Howard Tenenbaum appeared in the Toronto Star, demanding that the University act immediately to uproot antisemitism on campus.