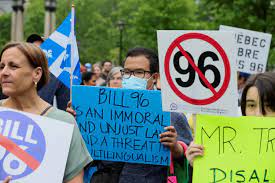 MONTREAL – A virtual community forum on Bill 96 saw B’nai Brith Canada given a mandate to clarify the Quebec Government’s willingness to scale back provisions of Bill 96 and to consider a possible lawsuit against the Government for failing to do so.

Hosted by Marvin Rotrand, B’nai Brith’s National Director of its League for Human Rights, the forum was attended by 200 participants from Quebecois minority groups. Participants heard Michael Mostyn, the organization’s Chief Executive Officer indicate that, for the first time in Canadian history, the “notwithstanding clause” has been used by a provincial legislature to override every basic freedom guaranteed by the Canadian Charter of Rights and Freedoms and for every clause of the law.

His remarks were echoed by prominent constitutional lawyers Julius Grey and Pearl Eliadis, who both described the Bill as heavy-handed and overreaching.

“Bill 96 is “the most gratuitous use of power I’ve ever seen,” Grey said explaining that he will be among a group of lawyers who will challenge Bill 96 in courts in Canada and address international tribunals such as the United Nations Human Rights Committee.

Pearl Eliadis who teaches law at McGill University said that Bill 96 goes far beyond what is necessary or appropriate to protect the French language. She termed the law a sustained assault on equality rights, fundamental freedoms, and human rights that has been ongoing in Quebec for over a decade – going back to Bill 21, which bars religious minorities from many public service jobs.

Leaders of the Jewish, Black, South Asian and Filipino communities who participated in the forum all said that Bill 96 does little to attract people to French and simply cuts access to English services for an existing English-speaking population. They all also agreed that the law was too restrictive in determining who is considered anglophone.

Luzviminda Mazzone, President of the Federation of Filipino Canadian Associations of Quebec told the meeting that it is hard to meet a Filipino anywhere who does not speak English but it’s also as difficult to find a young Filipino in Quebec who does not speak French.

Mazzone stated that Filipinos see knowledge of languages as an advantage, which explains why young Filipinos in Quebec who are obliged by Bill 101 to register for school in French almost always become quite fluent in the language

“We categorically reject the slanders of persons in the Government of Quebec that immigrants do not integrate. The facts are the opposite. Young Filipinos speak French, English and generally at least one if not more, of our national languages,” she stated.

Greg Bordan, a lawyer and member of the Adath Israel Poale Zedek congregation outlined how the law threatens the ability to recruit rabbis from outside Canada. He indicated that a request from the Jewish community to the Government to make a minor amendment to certain clauses of Bill 96 that would have given rabbis recruited elsewhere an exemption went unanswered.

“Bill 101 allowed rabbis to obtain a three-year exemption allowing them to work here legally and send their children to an English-language, Jewish school. The exemption could be renewed several times. Now under Bill 96, a single non-renewal two-year exemption is available. We are already seeing candidates to synagogues and yeshivas declining offers of employment. Top Torah specialists can’t be hired off the street. The Government’s inflexibility represents a real threat to the Jewish community’s long-term vitality,” said Bordan.

Also addressing the evening was Ramon Vicente, President of Filipino Family Services who told the audience that his organization has no problem with encouraging people to learn and to speak French. However, he agreed that Bill 96 is punitive and does not foster French.

“The Bill disenfranchises those that did not go to high school in Canada and thus do not qualify for English-language services here in Quebec. Bill 96 cuts the number of people who can be served in English in half. That will be the case for most Filipinos who came here as immigrants,” said Vicente.

That view was shared by Bashir Hussain, President of the Council of South Asian Communities and Gemma Raeburn, President of the Playmas Caribbean Cultural Association, both of whom said their members, particularly seniors, were impacted.

Mr. Hussain mentioned that, coming on the heels of Bill 21, Quebec is giving minorities the impression they are not wanted in the province. Mr. Hussain stated that, as a Muslim, he is offended that Bill 21 says that a Jewish man wearing a kippah cannot be hired for important employment in Quebec, for which he may be the best candidate. His conclusion is that marginalized communities need to challenge both Bills.

“Bill 21 openly discriminates against us. Why are highly-talented, competent people from the Sikh, Muslim and Hindu communities being told they are not wanted for many important, well-paying jobs in Quebec? Why is Ontario eager to find qualified candidates for professional jobs and trades from among religious minorities but Quebec is not?  Every province in Canada except Quebec specifically bars discrimination against racial and religious minorities,” he said.

“We are on record as calling Bill 21 bigotry, because that is what it is. When you deny a person a job for which they are qualified and for which they may be the best candidate because of their faith, it is religious discrimination, pure and simple,” said Ms. Raeburn, “The Caribbean community is an older one, with little renewal. The situation is bad enough but now under Bill 96 many of us, particularly our seniors, are not considered anglophone and we worry about access to English language services. You can imagine that prospective immigrants from Grenada, Jamaica, Barbados or elsewhere in the English-speaking Caribbean see Ontario as a far more welcoming choice than Quebec.”

Both these organizations represent people who have English as a mother tongue or as a common language within their country. However, since few of their members were educated in Canada, access to English language health care and other services is lost.

Several themes were recurrent through the evening. Speakers worried that onerous and expensive francization requirements that now apply to small businesses with 25 or more employees would drive many out of the province.

Joe Ortona, Chair of the English Montreal School Board indicated the Board had already sued the Government of Quebec over Bill 96, arguing that Canada’s 1867 constitution includes protection for minority-language education, that cannot be voided by the notwithstanding clause.

Ortona explained how the Legault government was endeavouring through various clauses of Bill 96 to take control of management of the English Montreal School Board, by unilaterally changing the Canadian constitution.

“The Government tried to abolish elected English school boards through Bill 40, but we have won in court, although Quebec is appealing,” said Ortona. “The Government is trying to do the same through Bill 96, trying to make our court victory redundant. We will fight for minority rights all the way to the Supreme Court.”

The meeting also heard from the Honourable Marlene Jennings, MNA for D’Arcy McGee David Birnbaum, City Councillor Sonny Moroz, Mark Groysberg, President of the United Community of Russian-Speaking Jews, Fo Niemi, Executive Director of CRARR and Danielle Fox, representing a group of students studying medicine and health care at McGill University. All the above participants stated that Bill 96 places healthcare professionals in conflict with the tenets and codes that govern their chosen professions, and with their certifying bodies.