NDP Should Think Twice Before Rushing to Condemn Israel 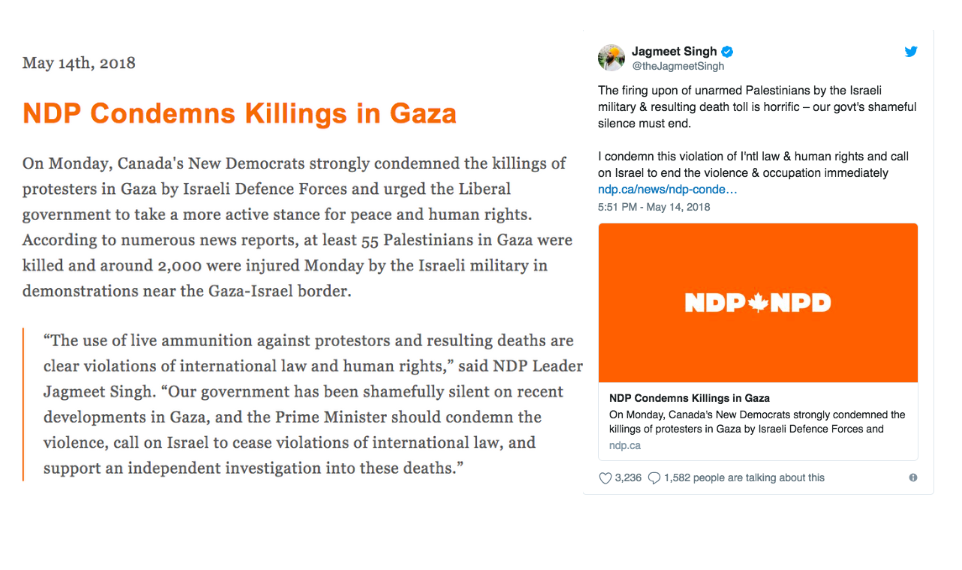 Statements from the NDP and its leader Jagmeet Singh (Photo: Screenshots)

On Tuesday, as Israelis rejoiced at the unveiling of the new U.S. embassy in Jerusalem, less than a hundred kilometres away, Palestinian rioters faced off against Israeli troops in what was the most violent confrontation since the 2014 Gaza War.

As headlines condemning Israel’s actions on the border poured onto the web, politicians from around the world were ready to place blame solely on the Jewish state – and far before all the facts were readily available. Canada’s federal NDP party, for one, was quick to issue a strongly-worded press release that vilified the IDF for protecting Israeli civilians: “Canada’s New Democrats strongly condemned the killings of protesters in Gaza by Israeli Defence Forces and urge the Liberal government to take a more active stance for peace and human rights.”

The New Democrats’ demonization of the Israeli military was uncalled for and failed to recognize the real culprit behind last week’s events – Hamas.

Over the last week, Hamas has orchestrated numerous attempts to breach the border fence, ignited wildfires, and detonated explosives, and continues to deliberately put civilians, especially children, in harm’s way.

Hamas urged rioters to “tear down the fence and then tear Israeli hearts out from their body.” Meanwhile, Jews living just hundreds of metres from the border waited in anticipation, fearing the worst.

As the humanitarian crisis worsens in Gaza, for the third time in two weeks, Palestinians have ignited a fire at the Kerem Shalom border crossing, a key entry point for food, medicine, and vital supplies. For Gazans who are in dire straits, it is their own fundamentalist “government” that hampers their prospects for a brighter future, not Israel.

On Tuesday, NDP leader Jagmeet Singh said, “The use of live ammunition against protestors and resulting deaths are clear violations of international law and human rights.” In an interview the following day, Hamas spokesperson Salah Al-Bardawil admitted that of the roughly 62 killed at the border, at least 50 were members of the terrorist organization. That number is now at 53, according to the Times of Israel.

The firing upon of unarmed Palestinians by the Israeli military & resulting death toll is horrific – our govt's shameful silence must end.

I condemn this violation of I'ntl law & human rights and call on Israel to end the violence & occupation immediately https://t.co/bQBArlvpRH

The NDP press release failed to mention Hamas once. As of press time, it has not acknowledged this new information, that the overwhelming majority of those killed in Gaza were members of a criminal terrorist organization.

As a transparent democracy, Israel should and will fully investigate every single death on the border. Instances of excessive use of force or unjustified engagements should be dealt with in accordance to the law. Soldiers are no exception, and should be held to the highest ethical and legal standards.

But, despite Hamas’s intentions to sacrifice its own people, for the IDF to have been able to act with such precision and avoid civilian casualties is a testament to, as Nikki Haley says, the army’s remarkable restraint. By insisting that Israel cannot defend itself against thousands of rioters who are pawns of a terrorist organization, the NDP fails to differentiate between friends and foes, good from evil.

If the New Democrats are truly interested in promoting “peace and human rights” between Israelis and Palestinians, they should reassess the involved parties: the sole democracy in the region and a terrorist organization that places no value on human life.

Benjamin Paul is a communications associate with B'nai Brith Canada.