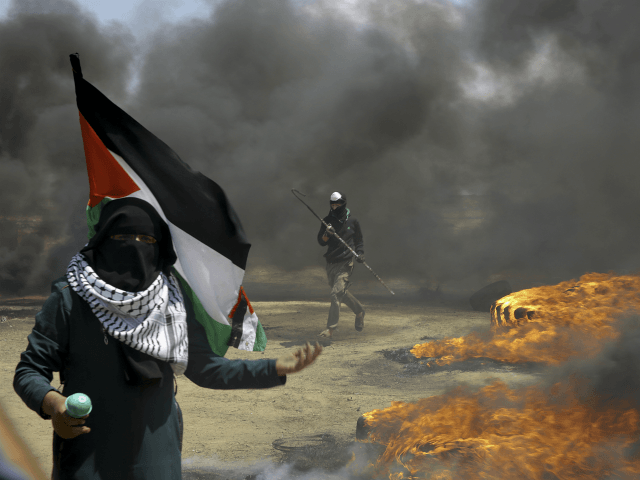 A protestor at the Gaza riots on Monday, April 14, 2018 (Photo: Associated Press)

Media outlets from all over the world were quick to judge and condemn Israel Tuesday after a deadly riot at the Gaza border left 62 Palestinians dead.

Reuters, a news syndicate used by outlets around the world, also connected the protests to the moving of the U.S. embassy to Jerusalem: “Israelis kill 52 protesters as US moves embassy.”

In a CNN segment about the protests with Palestinian politician Mustafa Barghouti, he said, “The Israeli army is using all kinds of lethal weapons against peaceful demonstrators.”

This “fact” wasn’t called into dispute.

In an online CNN story early Wednesday morning, the first sentence read, “Thousands of Palestinians gathered Tuesday for the grim task of burying the 60 protesters killed by Israeli troops.” It did not mention that Hamas operatives were among the protestors and those in attendance were encouraged to bring weapons, infiltrate Israel, kidnap civilians, and “hand them over to the resistance” so Hamas could use them as collateral.

Hours later, in an interview with the Palestinian Baladna news outlet, senior Hamas official Dr. Salah Al-Bardawil admitted that at least 50 of the 62 Gazans killed were members of the Hamas terror group. The Times of Israel now reports that number at 53.

Senior Hamas official sets the record straight on who was killed in last Hamas-orchestrated riots: "50 of the 62 martyrs were Hamas". Take his word for it. This was no peaceful protest. pic.twitter.com/oop2y3oWrB

As of press time, a full day after it was reported, neither the Washington Post, CNN, Reuters or any major news outlet outside of Fox News has picked up the story.

Indeed, a terror organization that praises the cold-blooded murder of Israeli civilians, regardless of their religion, has identified that the overwhelming majority of those killed in Gaza were its own card-carrying terrorist members – and the media doesn’t seem to care that they've been proven wrong.

From the looks of the riot, not to mention the tire bombs, Molotov cocktails, flaming swastika kites, etc., it certainly bares the hallmarks of a “peaceful” protest (not) and the UN, international community and mainstream media somehow continue to refer to it as such. As usual, they charge that “mediation” should always be the response to such demonstrations.

For its part, Hamas insists it will continue not to seek out any mediation or diplomacy with Israel.

“There is no mediation,” said Hamas spokesperson Fawzi Barhoum. “The marches will continue until our people achieve their goals,” a.k.a. destroying Israel.

Hamas can be a clever and sly organization, and it knew disguising a terror attack as a “peaceful protest” would gain Gazans international sympathy and Israel international condemnation. But even its most senior members probably couldn’t have anticipated how successful its campaign to condemn Israel on the world stage would be.

To illustrate this point, on Tuesday, Israeli MK Michael Oren appeared to CBC’s As It Happens with Carol Off, during which Off appeared to be overwhelmingly biased against Israel. “How do you think that looked to the world yesterday when all those people were shot dead at their border?” she asked Oren.

He responded: “I think it looked to the world the way Hamas wanted it to look to the whole  world. You’re doing just what they want you to do. Even your line of questioning is just what Hamas wants. And, frankly, Carol, you’re complicit in further damage and even the deaths of Palestinian kids. Because Hamas is going to conclude from listening to this interview that it works… and wake up tomorrow morning and do it again.”

Daniel Koren is a Media Coordinator with B'nai Brith Canada. Sara Gruszczynski is a Communications Associate.