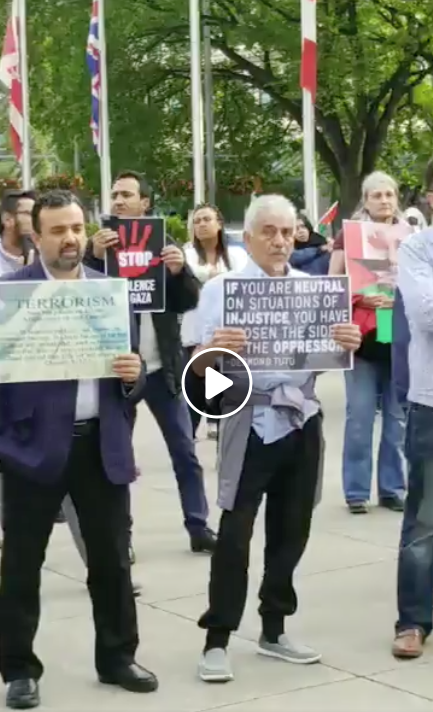 “Long live Palestine! Long live Hamas! Long live the Resistance!,” was shouted by one of about 30 attendees during a lull between speeches. Rather than condemning or distancing the rally organizers from the chant, the MC then proceeded to “remind” the crowd that, “This idea of resistance… dates back to Imam Hussein,” a key figure in Shi’a Islam.

Hamas is a designated terrorist entity in Canada, and its leaders regularly proclaim their intent to “heal the nation of its cancer – the Jews” and “rip out the hearts” of Israelis.

B’nai Brith Canada has filed a complaint over the pro-Hamas chant with police, which is now investigating the incident.

Praise for Hamas at the Calgary al-Quds Day rally foreshadowed events in Toronto the next day, where a flag of the Hezbollah terrorist organization was waved in the streets, and signs were brandished warning Jews they would meet the same fate as the destroyed Jewish communities of the Arabian Peninsula.

“Hailing a genocidally antisemitic terrorist group outside the city hall of one of Canada’s most diverse cities is totally unacceptable,” said Michael Mostyn, Chief Executive Officer of B’nai Brith Canada. “We expect Calgary Police and the City of Calgary to take swift action to prevent the Jewish community from being targeted again in a similar manner.”

Ironically, one of the organizers of the rally concluded proceedings by remarking, “If there is a terrorist attack anywhere in the world, we will condemn it.” However, an earlier speaker had bizarrely alleged that Zionism is “the underlying cause of all the forces of terrorism that we see,” consistent with the antisemitic belief expressed by a Toronto al-Quds organizer that Jews are affiliated with ISIS.

Though ostensibly held for the benefit of Palestinians, al-Quds Day is not marked by the Palestinian Authority and was in fact proclaimed by Iranian dictator Ayatollah Khomeini in 1979.

In Calgary last week, Maulana Hadi Hasan, a local Shi’a cleric, acknowledged that he “did not see a lot of Palestinians” at the rally, which he himself attended.