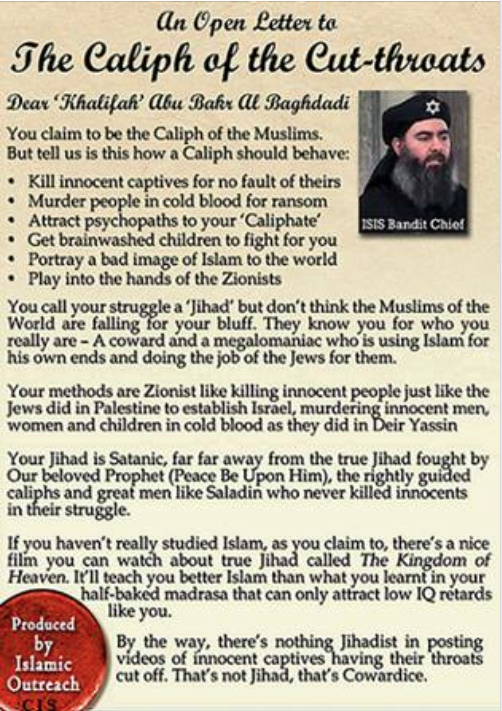 Siraj Sabowala, using the Facebook name “Siraj Ali,” publicly posted an image depicting ISIS leader Abu Bakr al-Baghdadi with a Star of David photoshopped onto his head. The image accuses the terrorist chief of “doing the job of the Jews for them” and “play[ing] into the hands of the Zionists.”

Ironically, Sabowala submitted a sworn affidavit to the City of Toronto’s Executive Committee on March 20, 2019, in which he deposed that he and other members of the al-Quds Organizing Committee “oppose Zionism but not Judaism,” “reject the claim that Zionism and Judaism are one and the same,” and “oppose all forms of bigotry and racism.”

For years, B’nai Brith has been urging the City of Toronto to enforce its own Hate Activity Policy by preventing the al-Quds Day rally from occurring on city property and forcing the organizers to bear the cost otherwise incurred by City of Toronto taxpayers.

“The fact that one of the Toronto al-Quds Day organizers has promoted antisemitism online is disappointing, but not surprising,” said Michael Mostyn, Chief Executive Officer of B’nai Brith Canada. “This further illustrates how misleading it is for organizers to claim they merely oppose Zionism and not Judaism.

“There is no excuse now for the City of Toronto to fail to take action.”

In a May 13 letter to Toronto City Council, Dimitri Lascaris, legal counsel for the al-Quds Organizing Committee, acknowledges that Sabowala shared the post but denies that it is antisemitic. “It is important to understand that, in his February 5, 2015 post, Mr. Sabowala does not blame Jews as a collectivity for the killing of Palestinians,” the letter reads.

“When an image depicts the Star of David – a global Jewish symbol – on the head of a terrorist leader, it is clearly antisemitic,” Mostyn said.

“Furthermore, the claim that Jews are behind the atrocities of ISIS is a widespread antisemitic canard in portions of the Islamic world, part of a conspiratorial mindset that sees Jews behind all of society’s misfortunes.”

Lascaris suggests that, because Israel has provided medical aid to residents of southern Syria during that country’s civil war, including jihadist fighters, Sabowala was justified in sharing a post that claims ISIS is aligned with Israel.

His letter fails to mention, however, that Israel also provides medical treatment to Palestinian terrorists wounded during attacks against Israelis, nor does it address that ISIS, under al-Baghdadi’s leadership, has murdered Jews in Europe and Israel.

On May 14, Toronto City Council unanimously approved measures proposed by Mayor John Tory and Councillor James Pasternak to crack down on hate rallies, such as al-Quds Day. However, City staff have not answered B'nai Brith's inquiries as to what specific steps they are taking to implement Council's instructions.

The al-Quds Day hatefest is scheduled for June 1, 2019 in many cities worldwide.

al-Quds Day Toronto al-Quds Day Siraj Sabowala Toronto City Council
Published : May 30, 2019
Do you like this post?
Tweet
Have you experienced antisemitism, racism or discrimination? Report an Incident