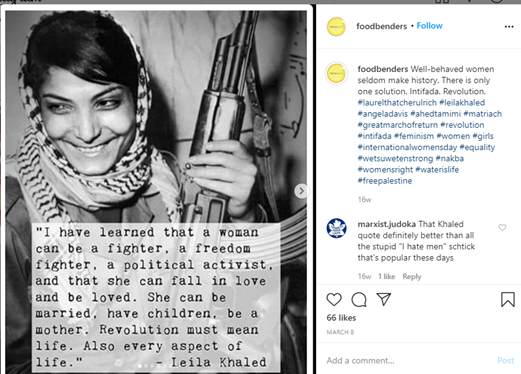 November 1, 2020
B'nai Brith Canada
TORONTO – The City of Toronto has filed charges against a local establishment that has used antisemitic smears and supported terrorists on social media, B’nai Brith Canada has learned.

Foodbenders, located in Toronto’s west end, became a lightning rod for controversy in July when it told its Instagram followers: “#zionistsnotwelcome.” Other posts by the eatery alleged that “Zionists are Nazis,” denounced Prime Minister Trudeau as a “Zionist puppet” and glorified Leila Khaled, who hijacked two planes in 1969-1970 as a member of the Popular Front for the Liberation of Palestine (PFLP), a designated terrorist entity in Canada. Foodbenders later released a statement to clarify its actions, but then made further posts justifying terrorism against Israelis and accusing the Jewish State of “systematic genocide.”

After a B'nai Brith-spearheaded grassroots campaign by Canadian Jews and allies, Foodbenders was dropped by food delivery services and abandoned by many of its former clients. B’nai Brith also pressed the City of Toronto to revoke Foodbenders’ business license for breach of section 27 of By-law No. 574-2000, which prohibits the use of a licensed business to “discriminate against any member of the public” on grounds of “race, colour, or creed.” It is under that very provision that Foodbenders has now been charged.

On Thursday, B’nai Brith learned that Toronto Bylaw Enforcement had decided to proceed with charges and request a hearing before the Licensing Tribunal. The Tribunal has the power to suspend, revoke or refuse to renew a license, and can also impose conditions.

“We are relieved to hear that the City of Toronto has finally advanced this critical process,” said Michael Mostyn, Chief Executive Officer of B’nai Brith Canada. “Enough is enough – businesses in Canada’s most diverse city cannot be used to foment racism and antisemitism.”

The decision comes after months of work by B’nai Brith to collect evidence of Foodbenders’ incitements and relay it to Bylaw Enforcement. Most troublingly, B’nai Brith discovered that the establishment’s owner had allegedly committed an unprovoked assault against two Jewish Torontonians who had entered the store and engaged an employee in conversation.

Most of Foodbenders’ social media accounts have also been shut down; only its Instagram appears to remain active. B’nai Brith calls on Instagram to honour its own policies and remove accounts that promote violence or discrimination.