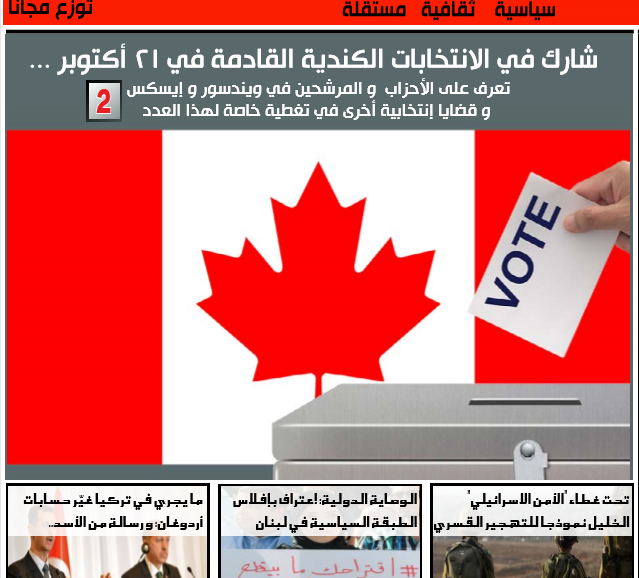 The front page of a pre-election edition of al-Forqan

TORONTO – Several federal election candidates have apologized for advertising in two newspapers with a history of promoting terrorism and antisemitism, following advocacy by B’nai Brith Canada.

Pages 4 and 5 of the September 2019 edition of al-Forqan, a Windsor, Ontario-based Arabic-language newspaper, contained paid full-page advertisements from Brian Masse, the incumbent NDP candidate in Windsor West, as well as three Liberal candidates in the area. The three Liberal candidates are Sandra Pupatello, who is running against Masse in Windsor West, Irek Kusmierczyk, running in Windsor-Tecumseh, and Audrey Festeryga, running in Essex.

In 2016, B’nai Brith exposed an editorial in al-Forqan that praised terrorist attacks in Israel as a “sacred duty of jihad.” This prompted the Multicultural Council of Windsor and Essex County to cut ties with Mohammed Khalifeh, al-Forqan’s Managing Director.

The May 2018 edition of al-Forqan proclaimed: “The Hour [of Judgment] will not come until the Muslims fight the Jews and kill them” (page 7). The November 2018 edition asserted that “Lying is an attribute inherent to the Jews!” (page 7). The Jerusalem Center for Public Affairs has also unearthed numerous pro-terrorism social media posts by Khalifeh himself.

In a statement provided to B’nai Brith on Friday, Masse said: "I would like to apologize for any hurt that may have been caused and pledge to not run any further ads in this newspaper." Pupatello also apologized on behalf of herself and the other Liberal candidates, indicating that placing advertisements in al-Forqan was a mistake.

Meanwhile, Scarborough Centre MP Salma Zahid placed a full-page ad in the recent October 11 edition of the Toronto-based al-Meshwar newspaper (page 10). Al-Meshwar is notorious in the Canadian Jewish community for carrying articles distorting the Holocaust, praising terrorist attacks and describing Judaism as a "terrorist religion." In 2017, then-NDP leadership contestant Niki Ashton disavowed an endorsement by al-Meshwar’s editor, Nazih Khatatba, after it was exposed by B’nai Brith.

Zahid told B’nai Brith on Friday that she was unaware of al-Meshwar’s history of antisemitism, and would not advertise in the publication again.

“There is absolutely no excuse for subsidizing Jew-hatred by placing advertisements in these antisemitic publications,” said Michael Mostyn, Chief Executive Officer of B’nai Brith Canada. “Our political candidates should be the first to acknowledge this fact, and we thank them for doing so in this case.”