WATERLOO, Ont. – It was a sunny yet cold afternoon last Friday, March 23 at Wilfrid Laurier University, but that didn’t stop members of the Laurier chapter of Alpha Epsilon Pi (AEPi) from participating in a “Naked Mile” run in support of the country’s oldest independent and self-funded Jewish organization: B’nai Brith Canada.

It is the first time in its 104-year history that the international fraternity, with 16 chapters across Canada, has chosen to support a Canadian charity as its community partner.

It was also the largest-ever fundraising event held by a Canadian chapter of AEPi. 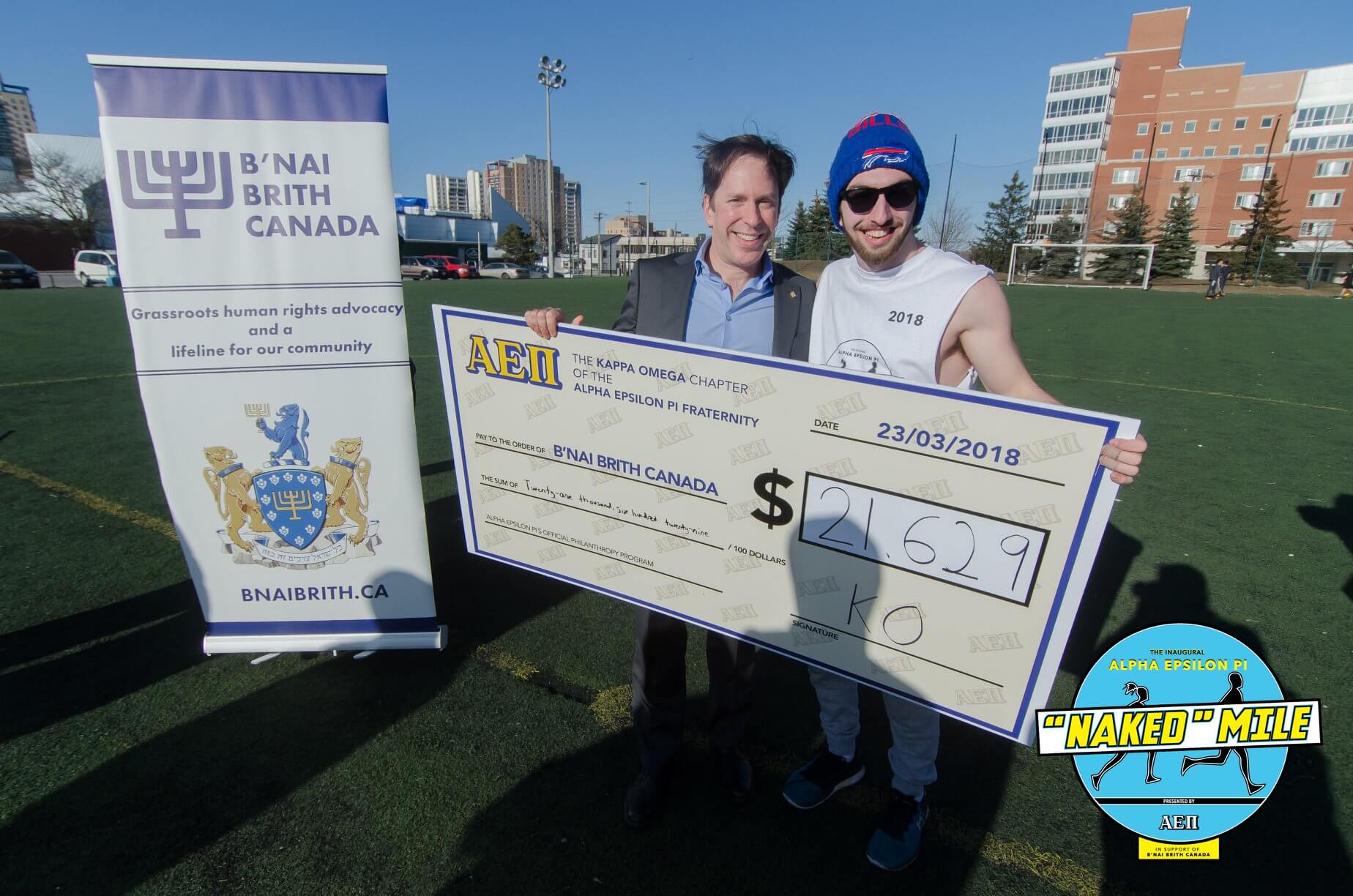 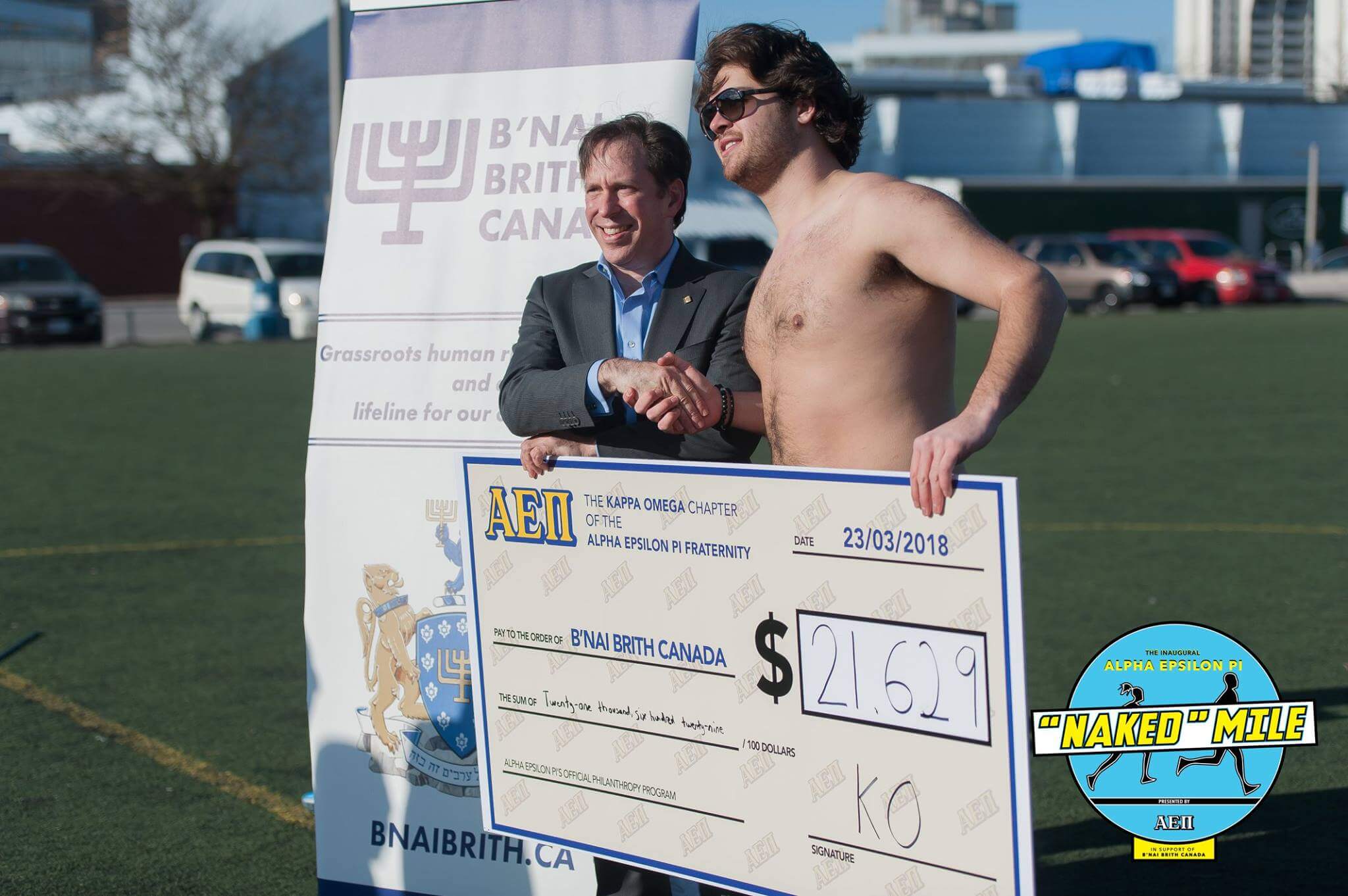 “B’nai Brith is a leader in combating racism and antisemitism in Canada, and we look forward to working closely on these important issues,” said Andrew Borans, Chief Executive Officer of the Alpha Epsilon Pi (AEPi) Foundation. “Unfortunately, antisemitism is a reality on Canadian campuses, and whenever it strikes, our first call will be to B’nai Brith’s 24/7 Anti-Hate Hotline. We thank B’nai Brith Canada for its efforts in supporting our Jewish students on campus.”

Armed with branded t-shirts and boxing shorts, AEPi brothers, alongside several Wilfrid Laurier students, braved the cold to run the Naked Mile. Mikey Cooper, President of AEPi Laurier, accredits the event’s success to his AEPi brothers and fellow students, who vigorously promoted the event online and throughout the Laurier community. 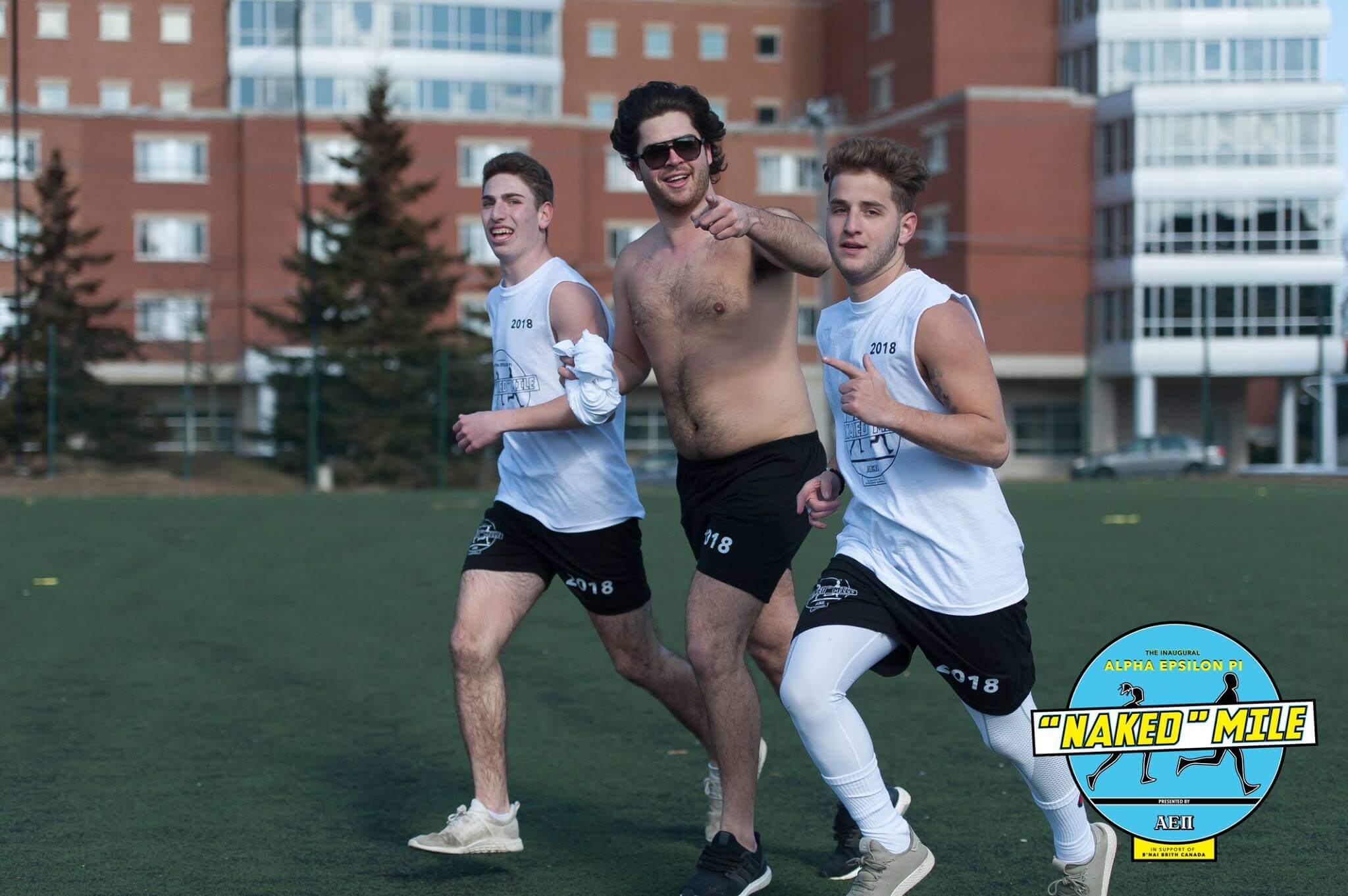 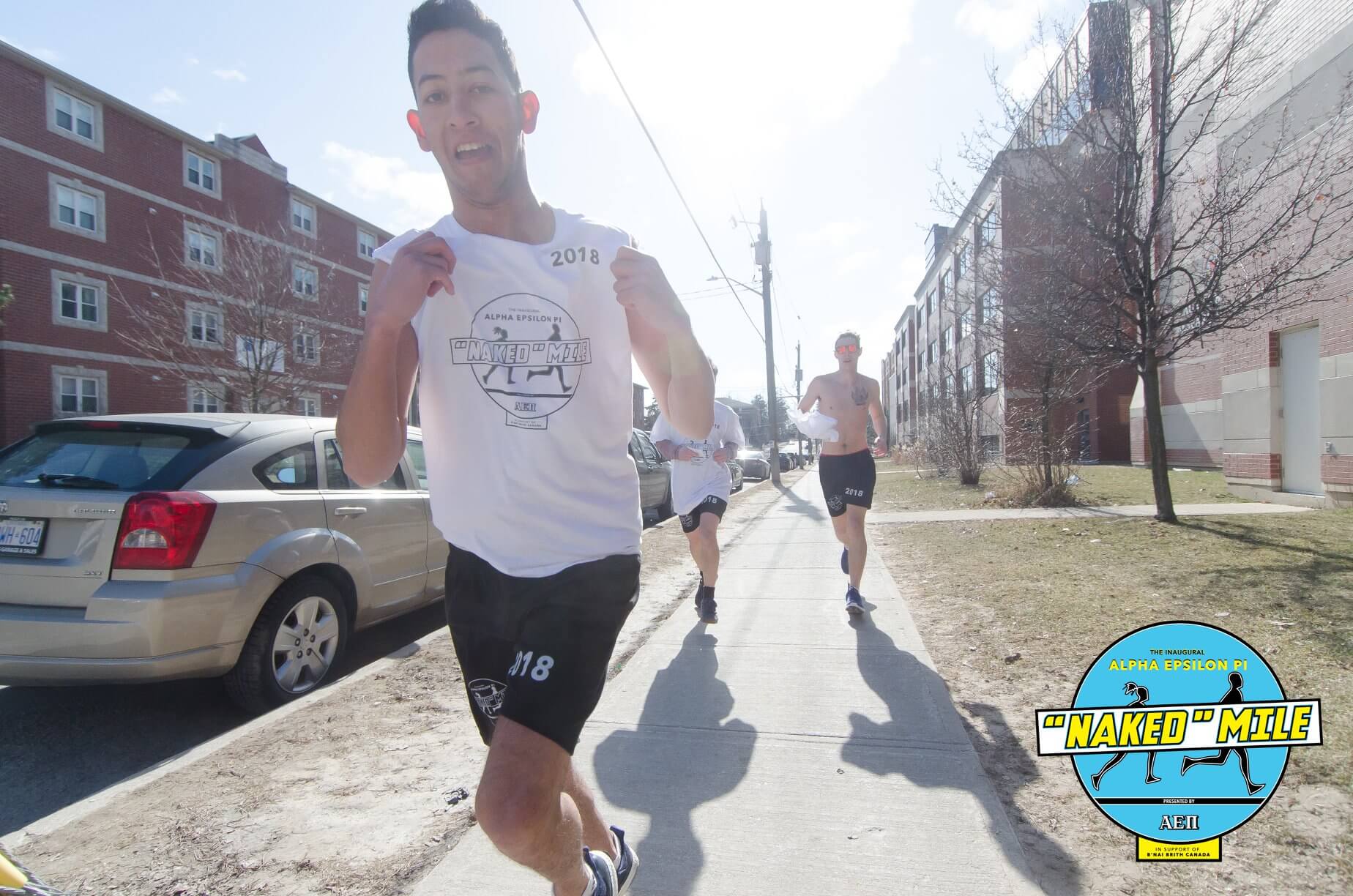 “It was very meaningful to raise funds for an organization that combats antisemitism, staunchly supports Israel, and supports our community through seniors programming and other initiatives,” said Cooper. “It’s rewarding because we see B’nai Brith every day, in school, in amateur sports leagues, and in the community and we’re excited to see our fundraising dollars being put to good use.

“We want to make this an annual event!” he added.

The “Naked Mile” event was attended by several B’nai Brith representatives including Chief Executive Officer Michael Mostyn, who thanked members of the fraternity for their support of a good cause. 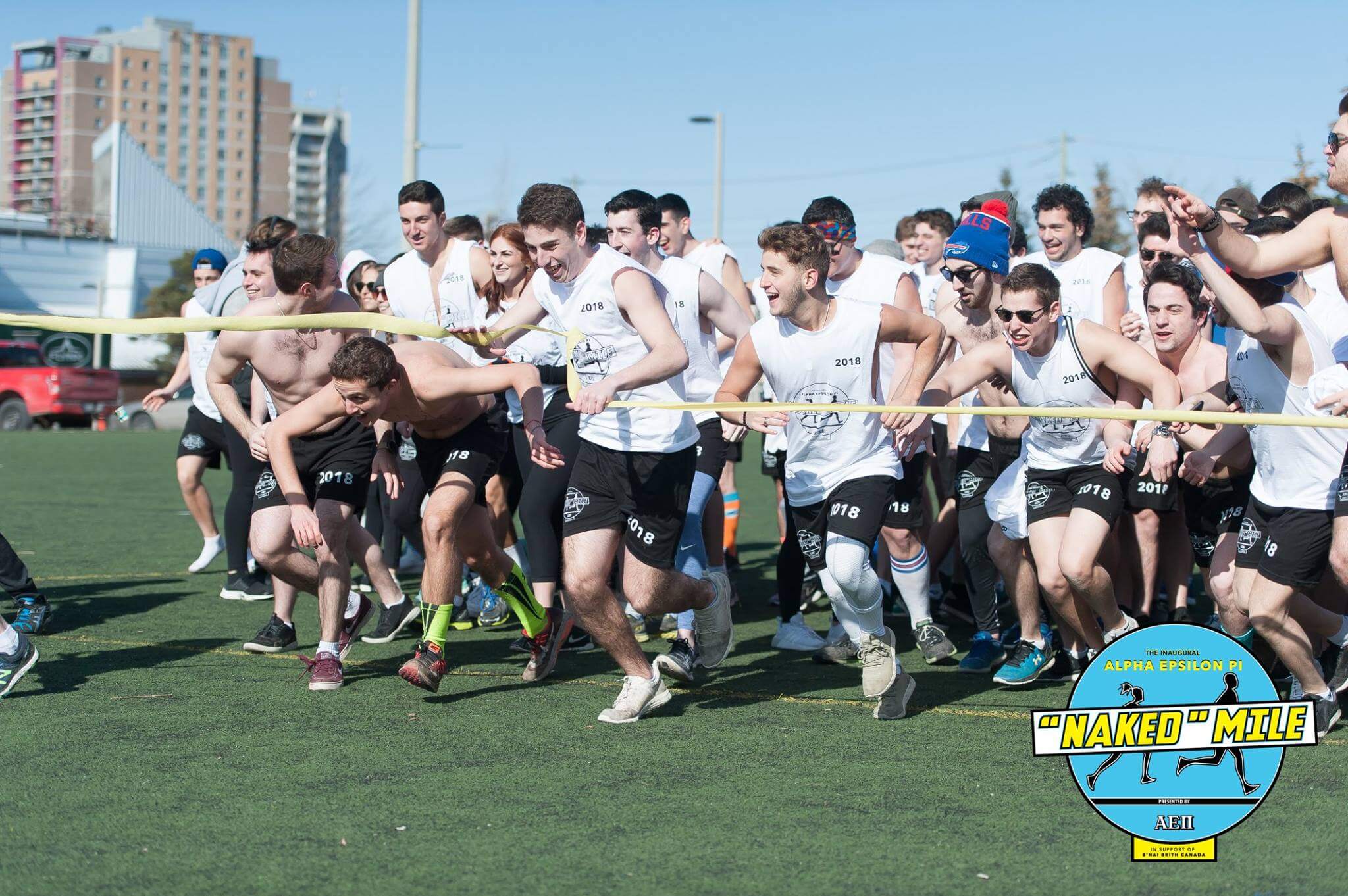 “We are proud to partner with AEPi, which develops some of the strongest advocates for Israel and the Jewish community,” Mostyn said. “Thanks to your support, B’nai Brith can continue its vital and important work on behalf of Canada’s grassroots Jewish community.”