Why Roger Waters is Guilty of Antisemitism

MONTREAL – In the midst of his latest North American tour, Pink Floyd co-founder Roger Waters is being accused of a malicious and intensive campaign against Israel and the Jewish people.

B’nai Brith Canada, as well as two former Montrealers – Professor Charles Small, the founding Director and President of the Institute for the Study of Global Antisemitism and Policy (ISGAP), and New York Times best-selling author/filmmaker Ian Halperin – have been leading the charge against Waters, whose Canadian tour begins on Oct. 2 in Toronto and has stops in Quebec City, Montreal, Winnipeg, Edmonton, Ottawa and Vancouver.

Waters is universally recognized as the de-facto leader of the boycott, divestment and sanctions (BDS) movement, which uses inhumane tactics to demonize, delegitimize and isolate the State of Israel economically, culturally, and politically. In a bid to raise awareness of how, through his support of BDS, Waters promotes antisemitism, B’nai Brith has partnered with Halperin and Smalls to present screenings of the former’s latest film, Wish You Weren’t Here, which explores the role BDS and its supporters (mainly Waters) play in contemporary antisemitism. The screenings will take place on the same nights as Waters’ Canadian tour stops.

Wish You Weren’t Here includes interviews with the world’s leading experts on racism and antisemitism, including Small, Pope Francis, Natan Sharansky, Ronald Lauder, Alan Dershowitz, and Michael Mostyn. According to Halperin, none of these experts minced words by calling out Waters and everyone else who supports BDS as antisemitic. 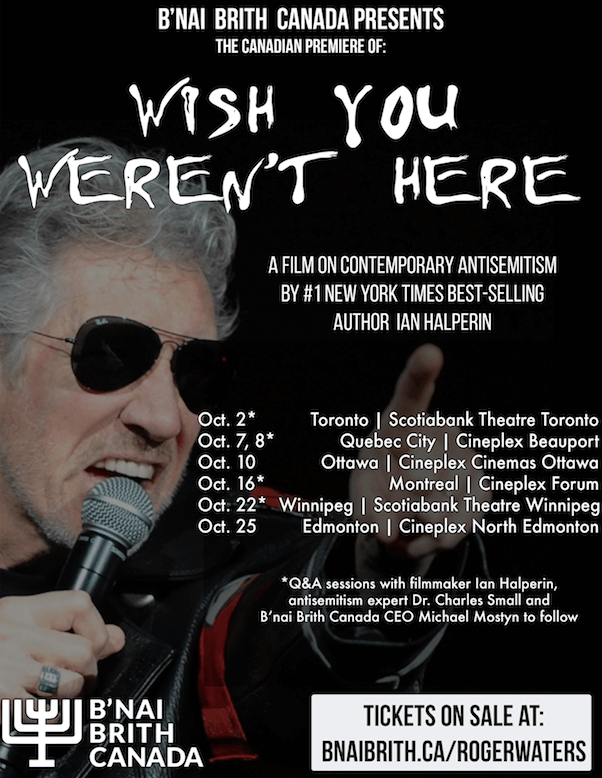 Mostyn also noted that, whether you abide Natan Sharansky’s “Three D’s Test” on antisemitism or its definition as stated by the Ottawa Protocol on Combating Antisemitism or the European Union Monitoring Centre (EUMC), Waters is, without a shadow of a doubt, guilty.

Small pointed to Waters’ 2013 tour – the highest grossing one ever by a solo artist, raking in over $450 million USD – when he wore attire that strongly resembled Nazi garb (red armbands and all), made a mockery of Jewish symbols by emblazoning the Star of David on a pig-shaped balloon, and strongly pushed for boycotts of Israel. “It is time that all those concerned about human rights expose his hatred and anti-democratic ideals and take a stand – once and for all,” Small said.

Halperin chipped in by quoting a former bandmate: “He’s a master of misdirection and the penultimate control freak. If his fans really knew what he was about they’d run for their lives. He had several failed marriages because nobody could live with him. His temperament is highly abusive. His campaign against Israel and the Jewish people is horrendous, disgusting and completely abusive. Israel should sue his ass for spreading such nonsense against its country and people. Roger has caused Israel irreparable damage.”

Waters has long been viewed as a leader of BDS within the cultural sphere, accusing Israel of committing “crimes” of “apartheid,” “ethnic cleansing” and wielding “abhorrent and draconian control” over the Palestinian population.” In a Guardian article entitled “Tear down this Israeli wall” (March 11, 2011), Waters likens Israel to apartheid South Africa, despite rebuttals from several prominent South Africans.

Indeed, Waters has a history of espousing antisemitic conspiracy theories, speaking about the “extraordinary” power of the “Jewish lobby” and even comparing Israeli treatment of Palestinians to the Nazis’ treatment of Jews during the Holocaust. Clearly, these assertions cannot be cast under the framework that Waters is being “critical” of Israeli policies and nothing more. No, this is cold, calculated antisemitism being paraded under the guise of anti-Zionism. Period.

Waters has long lobbied artists to cancel their shows in Israel, and continues to attempt to humiliate and destroy the careers of artists who do perform there. Most recently, he attempted to persuade Radiohead to boycott the Jewish state, though his attempts failed due to a principled position of the band’s lead singer Thom Yorke. Waters’ anti-Israel and antisemitic activities have led human rights and community leaders to accuse him of promoting “classic antisemitic conspiracy theories,” asserting that his “views on Israel are in fact coloured by offensive and dangerous undercurrents of anti-Jewish sentiment.”

Halperin, Small, and other experts agree that criticism of Israeli government policies – like criticism of any government policy – is not only legitimate, but a necessary and productive means of ensuring a thriving democratic society and vigorous pluralistic debate. However, BDS activists seek to conflate legitimate criticism of Israel with the delegitimization of Israel in the international arena. By exploiting the rhetoric of “human rights,” “social justice” and other universal moral principles, BDS activists portray Israel as inherently racist, thereby calling into question the very existence of the Jewish state, seeking to cast it as a pariah among nations.

.@rogerwaters is coming to #Canada to spread lies on #Israel. This is our counter protest. To buy tickets to #WYWH: https://t.co/HYqP6Z2AfZ pic.twitter.com/K5MH501paz

The tactics of utilizing double standards and strategies of demonization and delegitimization are all expressions of contemporary antisemitism.

Through the Wish You Weren’t Here Canadian tour, B’nai Brith and Halperin are hoping to promote awareness of the fact that BDS is a bigoted movement, and that Waters – whether he believes it or not – is guilty of promoting antisemitism and of strengthening the campaign that seeks Israel’s elimination in its entirety.

Offering the screenings on the same dates as Waters’ Canadian performances is an effort to “offer a balanced perspective” on the inflammatory rhetoric he espouses during his shows. “This is our counter protest,” B’nai Brith said in a statement, and indeed the sentiment holds true. Why stand outside an arena and wave signs around when we can educate others about why Waters’ position is wrong, irresponsible, and offensive?

With the Wish You Weren’t Here tour, anyone, whether they’re Pink Floyd fans or not, can learn the extent of why BDS is a discriminatory and racist movement – and why Roger Waters should immediately cease engaging in antisemitism and instead support the human rights of both Palestinian civilians AND Israeli civilians in a way that is honest, objective, and productive.

Maybe then will he actually help in promoting a path to peace – rather than pushing the divide even further apart.

Mike Cohen  is B’nai Brith Canada’s Quebec bureau chief. He can be reached at [email protected]. Follow him on Twitter @mikecohencsl.