I know antisemitism is out there. I’ve been on Facebook and Twitter. I watch the news. Heck, I’ve even experienced it myself. But to me, there’s a difference between going on a Holocaust-denying tirade on social media and drawing hateful symbols on equipment that children play on or the buildings where they learn.

We know that children aren’t born racist or antisemitic; those prejudices are learned based on what they are exposed to. And with all this graffiti displaying antisemitic ideas and mocking the Holocaust, that’s exactly what is happening: children are being exposed to racist and bigoted ideologies in an environment out of their parents’ control, and certainly sooner than their parents would have wanted. No parent can shelter their kids from the world forever, but most would prefer to be able to introduce and talk about controversial topics like racism and antisemitism in a more controlled environment.

To be forced into a conversation with your child about what swastikas and other racist and antisemitic symbols and epithets refer to – and to explain to them that some people in this world promote hatred against others merely because of their race or religion – is not something I wish on anyone. I know that I too will one day have these conversations with my own children, but I hope that I’ll be able to do it when I feel they’re ready, and not because they’ve seen an offensive symbol spray-painted on a building. 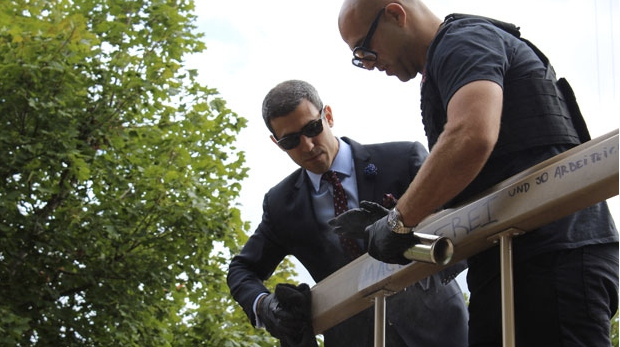 Sadly, the antisemites drawing these symbols are forcing parents’ hands. And the outcomes of those conversations could go in many different directions.

Recent studies show that children as young as three or four can develop racist prejudices. Using that logic, let’s imagine the following scenario: the four-year-old child of a man who dislikes Jewish people but is not particularly outspoken about it goes home to ask his father about the swastikas etched onto his school’s playground. His father, rather than giving a well-thought-out discussion on racism, gives a somewhat disgruntled response and even somewhat justifies the racist symbol. Will that child develop the same antisemitic prejudices as his father? It’s not all that far-fetched to believe that he will.

This is why education, both at home and at school, is paramount and the only way to prevent racist or hateful ideologies from taking shape in the minds of impressionable youth. The worst thing for a parent or teacher to do is avoid having a difficult conversation with a child or student, and let them Google the word ‘swastika’ instead. We must not allow the Internet to raise our children; it is our responsibility to bestow to them the morals and ethics that guide us as Canadians, and teach them that such hateful symbols will not be tolerated in our inclusive society.

That’s why I’m going to talk with my children often, and in age-appropriate ways, about racism, bigotry, antisemitism, prejudice, and all the ugliness that exists in the world, so that when they are exposed to it one day, they’ll know how to react. They’ll know not to smile or laugh when confronted with the letters ‘KKK’ scrawled across buildings, but to take it seriously.  They’ll have to understand that this type of hatred is out there, but that there are more people opposed to it than in support of it.

The last time I was in Toronto visiting my sister, my niece came home from a day out with her friends to tell her mother about a swastika she saw drawn in a playground. She is nine years old and already she fully understands what a swastika is, what it means, why someone would draw it, and the importance of reporting it. That saddens me, but I’m glad to know that she’ll be in the trenches, fighting for love and respect rather than hatred and racism.