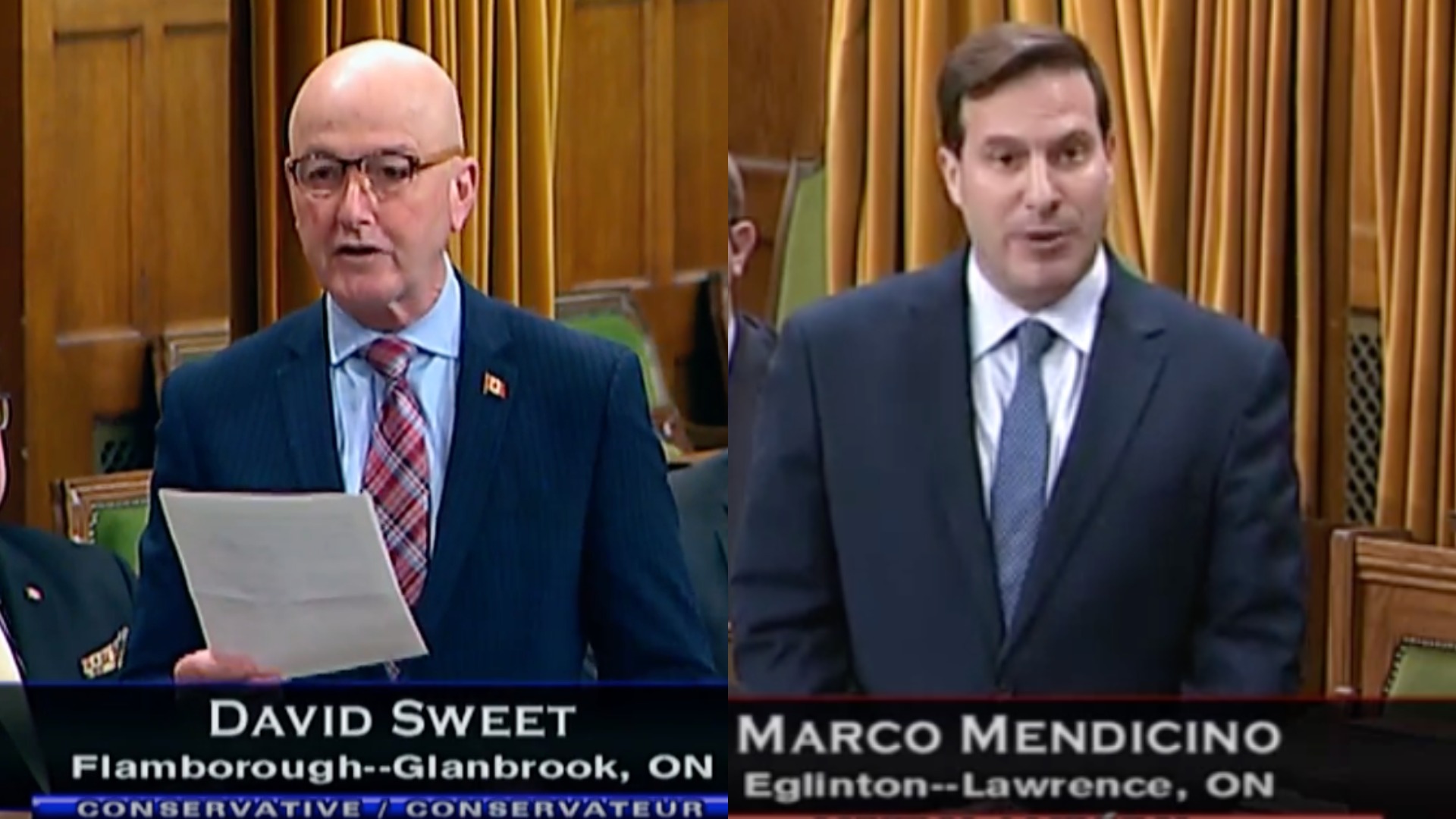 MPs David Sweet (left) and Marco Mendicino (right) give statements in the House of Commons on Nov. 30, 2018

OTTAWA – MPs David Sweet (Flamborough—Glanbrook, Conservatives) and Marco Mendicino (Mount Royal, Liberals) both made statements in the House of Commons Friday to commemorate the Day to Mark the Departure and Expulsion of Jews from Arab Countries and Iran, also known as “Jewish Refugee Day.”

Recognized in Israel Nov. 30, “Jewish Refugee Day” pays tribute to the 850,000 Jews who were forced to flee their homes from across the Middle East in the days leading up to (and following) the creation of the State of Israel.

In the face of rising persecution, Jews were displaced and subjected to systemic antisemitism. Billions of dollars worth of property was confiscated, severe restrictions were placed, and some were executed in cold blood.

Thank you @DavidSweetMP for continuing your years-long tradition of honouring and paying tribute to the 850,000 #JewishRefugees who were forced to flee their homes from across Arab lands and Iran. #Jewsof48 #cdnpoli pic.twitter.com/M4DyXwklg6

In his statement, MP Sweet thanked B’nai Brith Canada for its efforts in combating antisemitism and noted its annual campaign in honour of Jewish refugees. “B’nai Brith is doing truly outstanding work in honouring and educating people on the horrors that Jewish families and individuals have faced, while also promoting awareness of many other great injustices,” he said.

“I want to assure the Canadian Jewish community that we remember the Jewish refugees forced from their homes on this day of commemoration and that we will always fight against racism and antisemitism in all of its forms here at home and around the world.”

MP Mendicino echoed Sweet’s sentiments. “Jewish families were devastated as they were forced into exile, and they were also forced to experience injustices, the most egregious human rights violations, systemic violence, and even genocide,” he said.

“On this day, let us recognize the persecution and sacrifices of these Jewish refugees and let us also celebrate their accomplishments, their resilience, all of which is such a testament to the strength of this community.”

“On this day, let us reflect and recognize the persecution and sacrifices of these Jewish refugees, which they had to endure, and let us also celebrate their accomplishments, their resilience, all of which is such a testament to the strength of this community.”

David Sweet Jewish Refugee Day Marco Mendicino The Day to Mark the Departure and Expulsion of Jews from Arab Countries and Iran
Published : Nov 30, 2018
Do you like this post?
Tweet
Have you experienced antisemitism, racism or discrimination? Report an Incident