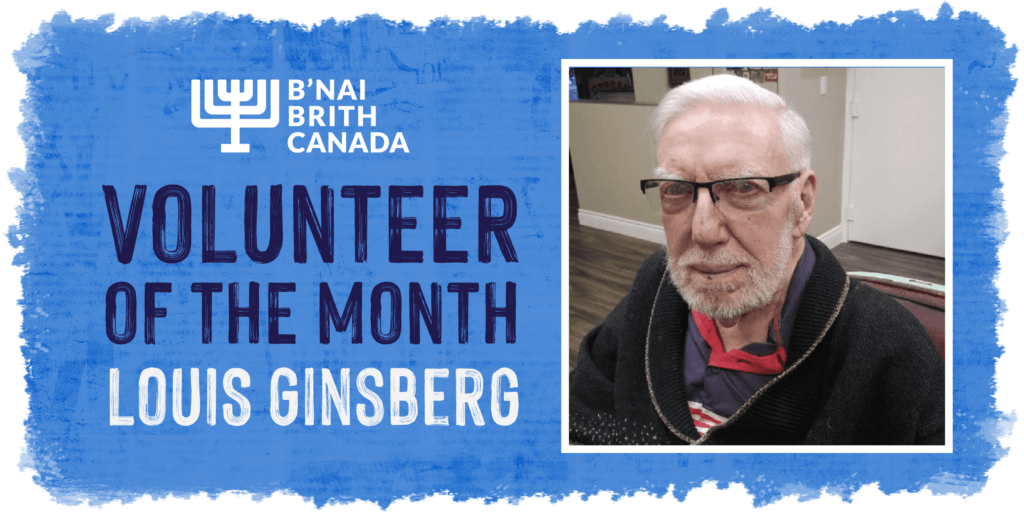 B’nai Brith Canada is proud to introduce a new feature that will be posted regularly at www.bnaibrith.ca/volunteer-with-us.

This feature will allow us to pay tribute and express gratitude to exceptional volunteers who have given their time and energy to further the missions of our grassroots, human-rights organization.

We are grateful and proud of

Louis Ginsberg, who passed away in December of 2020, was a selfless, devoted volunteer for B’nai Brith Canada and its lodges in both Montreal and Toronto for decades. A Montreal native, Lou was a loving husband, father and brother. He and his wife Barbara were wed in 1957 and enjoyed 63 years of marriage.

Lou’s involvement with B’nai Brith Canada began when he was a teenager, Barbara recalls. “He loved every minute” of participating and organizing B’nai Brith events as a volunteer, she says.

“Lou was always busy working as a volunteer on projects for important Jewish causes,” remembers Michael Bunker, a close friend of Lou’s and co-worker in the belt and leather-goods business as well as in the promotional business. “He was always busy with bingo. He raised a lot of money for the lodges. He was involved with starting up kosher food banks. For many, many years, he was very dedicated to many important Jewish causes, and he was very serious about getting things done. He was committed to the work. He was philanthropic. Truly, he was a great guy.”

So great to Michael, in fact, that Lou introduced him to his wife, Brenda Stevens.

“Lou was short of volunteers for bingo on one specific night so he asked me to come out and help out,” Michael recounted. “So I did. And at the bingo hall, he introduced me to Brenda, and the rest is history.”

“Lou was a real mensch, in the true sense of the word,” Brenda says. “He would deliver meals to people. He cared so much about others. He passed in his 89th year, but he was a young and energetic man for all the years we knew him.”

Those who knew Lou well say his passion and loyalty to the Canadian Jewish community and the causes of B’nai Brith Canada kept him driven and engaged.

Lou passed on Dec. 13, 2020. He was the beloved husband of Barbara and the loving father of Steven Ginsberg. He was a dear brother and brother-in-law of Dorothy Scodnick and the late Sydney Scodnick and brother-in-law of Rosalie Baum. He was a past-president and active member of Don Mills Lodge, which later became LMOL Don Mills Lodge. Lou also was a member of the Aza Boys Club and later became a member of Mount Scopous Lodge in Montreal before moving to Toronto.

Louis Ginsberg was an outstanding member of our community and an exemplary volunteer to B’nai Brith Canada. We are honoured to dedicate this first feature of Volunteer of the Month to Lou.