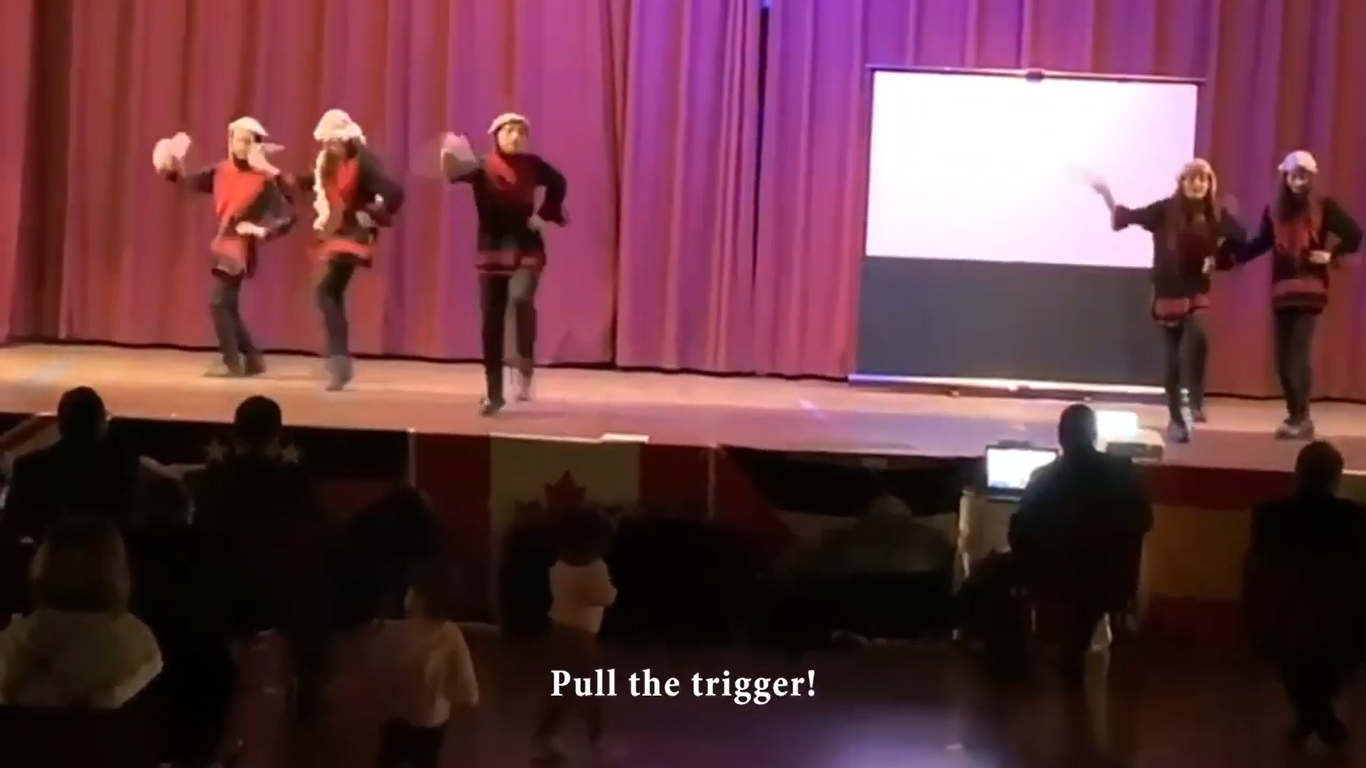 Children dancing to a violent song in Mississauga (Facebook)

On Sunday, the Arab Palestine Association of Ontario (APAO) hosted a commemoration for the “International Day of Solidarity with the Palestinian People,” featuring outgoing Green Party Leader Elizabeth May and Mississauga Centre MP Omar Alghabra in attendance.

Organizers uploaded a video of children performing Palestinian dances at the event, with some highly questionable lyrics.

One song called on listeners to replace “our bracelets with weapons” and “pull the trigger” in order to combat “the despicable ones.” A similar version of this song was exposed in 2010 by Palestinian Media Watch as part of the Palestinian Authority’s indoctrination of children to wage war on Israel.

The next song described a group gathering for “jihad,” urging the “commandos” to make use of their rifles. This was followed by a number juxtaposing a mother’s celebration of her son’s wedding with her celebration of his martyrdom, a motif common among supporters of Palestinian terrorism.

May gave remarks at the event, calling on attendees to "explain to the Canadian Jewish community, which is full of fine, fine people who think they understand the situation" that the Israeli military and government are "engaging in an absolutely immoral project of dehumanizing the people they don't want to see there."

“The indoctrination of children to glorify a life of violence is deeply disturbing,” said Michael Mostyn, Chief Executive Officer of B’nai Brith Canada. “So long as Palestinian children are taught to ‘replace bracelets with weapons’ and ‘pull the trigger,’ true peace between Israelis and Palestinians will be near-impossible to achieve.

“The fact that these attitudes have apparently been imported to Canada is a cause for great concern.”

The APAO appears to operate as the de facto Canadian branch of Fatah, the Palestinian Authority’s leading political party. For example, a June 2019 letter sent by the organization to its members addresses them as “Sons and supporters of the Palestinian national liberation movement – Fatah.”

On Friday, the APAO shared a video proclaiming, “the Israeli Zionists are Nazis.” The video formed part of a rant by Florida Pastor Rick Wiles, who also alleged that U.S. President Donald Trump was facing a “Jew coup” via the impeachment process.

To view the video of the performance, click here.

antisemitism Elizabeth May terrorism mississauga Omar Alghabra APAO
Published : Dec 04, 2019
Do you like this post?
Tweet
Have you experienced antisemitism, racism or discrimination? Report an Incident