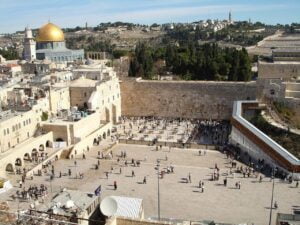 The United Nations Educational, Scientific and Cultural Organization (UNESCO) voted Thursday in favour of a draft decision on “Occupied Palestine,” which ignores the Jewish connection to Jerusalem and Jewish holy sites, referred to throughout the resolution only by their Islamic names.

“By furthering the libel that Israel is ‘carrying out aggressions’ against Palestinian schoolchildren and restricting Muslims from worshipping at these holy sites, UNESCO is now complicit in incitement against Jews,” said Michael Mostyn, CEO of B’nai Brith Canada. “This resolution is only adding fuel to the fire of antisemitism already being promoted by the Palestinian Authority.”

“On Wednesday night, as Yom Kippur came to a close, hundreds of thousands of Canadian Jews ended their fast with a prayer: to ‘spend next year in Jerusalem,’” Mostyn said. “Zionism is an essential element of Judaism. While this resolution is a calculated bid to erase Jewish, archaeological and biblical history, UNESCO’s anti-Jewish smear campaign will not be successful.”

If you would like your name added as a signatory to B’nai Brith Canada’s letter to UNESCO Director-General Irina Bokova demanding that this resolution not be passed, sign here.