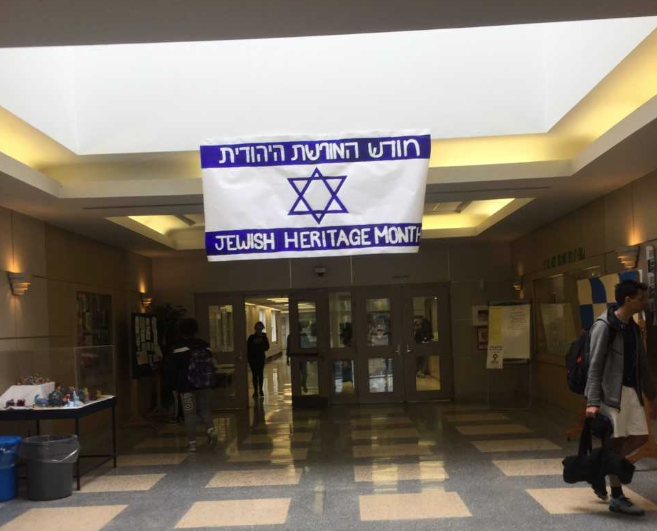 TORONTO – B’nai Brith Canada is expressing its outrage after the principal of a Toronto public school removed a banner made by students for Jewish Heritage Month, in a decision upheld by officials at the Toronto District School Board (TDSB).

The banner had hung for a week without incident in the main foyer of Forest Hill Collegiate Institute, a midtown Toronto high school with a large Jewish population, before being removed without notice or consultation on Monday. When questioned by students and parents, Principal Reiko Fuentes told them that, although originally approved, the banner was “too controversial” because it resembled the Israeli flag.

Parents of Jewish students at Forest Hill Collegiate Institute are fuming. Yael Elfassy, the mother of one of the students who made the banner, told B’nai Brith that, “The principal’s decision to remove the banner is totally unacceptable. She has no right to tell Jewish students to remove Israel from their heritage.”

When contacted by B’nai Brith, TDSB officials suggested that the banner be displayed internally at Jewish Heritage Month events organized by students, but stood by Principal Fuentes’ decision to remove the banner from the main foyer.

“The TDSB is making a mockery of Jewish Heritage Month,” said Michael Mostyn, Chief Executive Officer of B’nai Brith Canada. “This month is supposed to symbolize the acceptance and inclusion of Jewish students and teachers in Toronto schools, but is now marking the exact opposite.

“The administration at Forest Hill Collegiate Institute must immediately return the Jewish Heritage Month banner to its rightful place, and apologize to the Jewish students who have had their heritage denigrated by their own principal.”

The drive to mark Jewish Heritage Month at the high school came after students returned from the March of the Living, an annual program that takes Jewish youth to Poland to learn about the horrors of the Holocaust, and then to Israel to witness the revival of Jewish statehood in their indigenous homeland.

Upon their return, students expressed interest in holding Holocaust education workshops at their school, and were told by administrators to combine these activities with Jewish Heritage Month, which is marked in Ontario and across Canada in May.