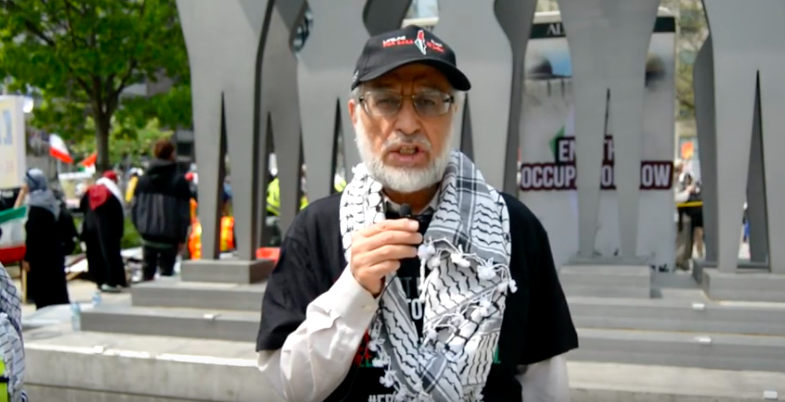 TORONTO – The imam of a Richmond Hill, Ont., mosque has alleged there is a “Zionist connection” to the devastating terrorist attack against two mosques in Christchurch, New Zealand, describing it as the work of “right-wing crazies following a script written in Israel.”

Zafar Bangash is the founder and leader of the Islamic Society of York Region, a registered charity, and one of the co-founders of the Toronto al-Quds Day rally. He was one of several speakers at the most recent iteration of the event, which took place Saturday.

In January, B’nai Brith exposed Bangash as the driving force behind Crescent Magazine: Newsmagazine of the Islamic Movement and the Institute of Contemporary Islamic Thought (ICIT), which have promoted antisemitism, homophobia and anti-Israel conspiracy theories for years.

Articles appearing in Crescent have suggested there are Jews who “belong to Satan,” that “Muslims will deal the deathblow to the Yahud [Jews],” and that homosexuality is “a contagion that preys on innocent victims.”

At Saturday’s rally, Bangash falsely alleged that Israel was trying to destroy the al-Aqsa Mosque, a Muslim holy site in Jerusalem. In fact, only the day before, Israel facilitated the prayer of 260,000 Muslims at the al-Aqsa Mosque, despite a terrorist attack earlier in the day.

“The allegation that Israel or ‘Zionists’ were behind the devastating terrorist attack in New Zealand is not only baseless, but extremely dangerous,” said Michael Mostyn, Chief Executive Officer of B’nai Brith Canada. “Canadian Muslims have been deeply impacted by these attacks, and falsely pointing the finger at members of the Jewish community is a recipe for disaster.”

The April 2019 issue of Crescent, which is distributed at mosques in Canada and worldwide, features an article entitled, “Terrorism, Mass Murders and Islamophobia.”

The article, authored by Bangash himself, blames Zionists for anti-Muslim sentiment in general, calling them “the principal promoters and instigators of Islamophobia.” It also insinuates that the New Zealand terrorist, Brenton Tarrant, was inspired by a 2016 visit to Israel.

In fact, Tarrant also visited Turkey, Bulgaria and Croatia. His manifesto never mentions Zionism and instead idolizes the medieval Crusaders who claimed the Land of Israel in the name of Christianity, which is completely inconsistent with Zionism.

Bangash’s article also asks rhetorically if it was “far-fetched to surmise” that an anti-Muslim political group that “also funded Tarrant… has received funding from well-heeled Zionists in the U.S. as well?”

In March, a show formerly hosted by Bangash on Canadian television was cancelled following a B’nai Brith petition. York Regional Police is currently investigating Crescent for the possible commission of hate crimes.

“Year after year,” Mostyn said, “al-Quds Day has shown us that, not only are the rallies rife with antisemitic propaganda, but such sentiments are routinely espoused by many of its leaders, whether in Toronto, London, Sydney, Tehran, or anywhere this hatefest is staged.”