Toronto Fails to Act Against Antisemitism Yet Again

TORONTO – For the third week in a row, antisemitism and support for terrorism were on display Saturday at a massive protest in downtown Toronto.

Over a thousand anti-Israel demonstrators marched from Yonge-Dundas Square to the Israeli consulate at Yonge and Bloor, shouting repeatedly for an “intifada.” In the Israeli-Palestinian context, an intifada means a violent uprising, and each Palestinian intifada has involved the use of suicide bombings, shootings, stabbings, car-rammings and other attacks against Israeli civilians.

At least one protester carried the flag of Hamas – a terrorist group that seeks not only the destruction of Israel, but a genocide against Jews globally. Others carried signs with antisemitic imagery, such as one depicting Israeli Jews as pigs, and another equating the Israel Defence Forces (IDF) with the Nazi SS. Organizers also bizarrely asserted at one point that “Canada is a part of Israel.” 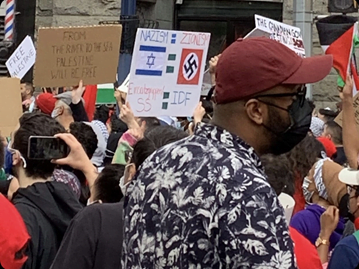 The march was organized by the Palestinian Youth Movement (PYM), a group that glorifies terrorism against Israelis. Last week, at another downtown Toronto protest held by the PYM, attendees threatened Jews by recalling the Battle of Khaybar, in which the ancient Jewish community of Arabia was killed or expelled. Pro-Israel counter-protesters were then repeatedly assaulted as they attempted to leave the area, despite a heavy police escort.

Both this week’s and last week’s PYM events were blatantly illegal pursuant to Ontario’s COVID-19 public health orders, which forbid outdoor gatherings of more than 10 people, and provide for fines of up to $10,000 for event organizers. B’nai Brith is not aware of any attempts by Toronto Police to enforce the orders with respect to anti-Israel protests.

“The inaction by the City of Toronto and Toronto Police with respect to downtown protests over the past few weeks is inexcusable,” said Michael Mostyn, Chief Executive Officer of B’nai Brith Canada. “These events are a massive safety risk, particularly for members of the Jewish community, but also for Canadians at large.

“We will not allow downtown Toronto to be transformed into a no-go zone for Jews. By failing to act decisively, authorities are ceding the field to lawbreakers and hatemongers.”

Protesters on Saturday also sang about carrying out “operations,” the predominant euphemism for terrorist attacks in the Arab World. Verses from the same poem were recited at a protest in nearby Mississauga last week, where attendees swore “to carry out operations against the Zionists.” The Toronto protesters also hailed the “beautiful sound” of Hamas rockets that murdered 11 people in Israel and forced millions more into bomb shelters.