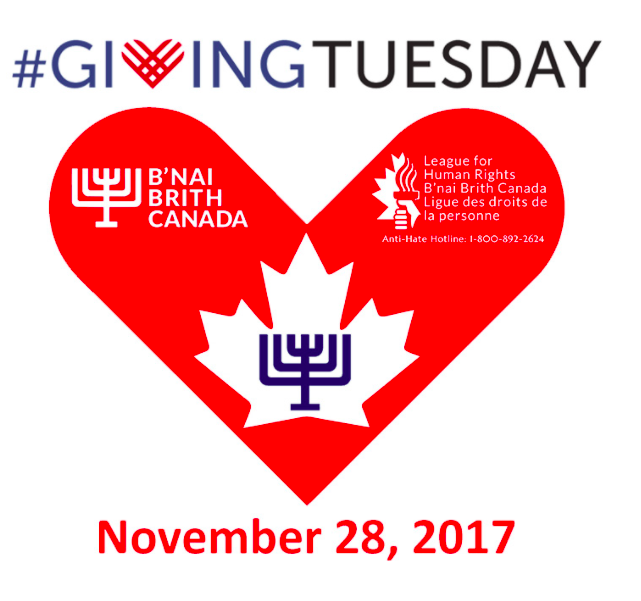 A week from today – on Nov. 28, 2017 – the world will mark #GivingTuesday, an international movement that seeks to promote charitable giving, and where people from around the world donate to causes that are near and dear to their hearts.

As the voice of Canada’s grassroots Jewish community, B’nai Brith Canada is proud to participate in this important initiative that embodies the Jewish concept of tzedakah. In a year marred with antisemitism and hatred targeting members of our community from both sides of the political spectrum, B’nai Brith’s ongoing advocacy efforts have been particularly vital, and it is only through your support that we can continue to fight for the human rights of all Canadians.

With the help of your fully tax-deductible donation, B’nai Brith will continue to:

a) Fight against the purveyors of racism and hatred in Canada, from notorious white supremacist Paul Fromm to Your Ward News editor James Sears to the Vancouver imam who urged his congregants to finance Palestinian terrorism.

b) Refute the antisemitic boycott, divestment, and sanctions (BDS) movement, as we did through our nation-wide campaign in support of award-winning filmmaker Ian Halperin’s Wish You Weren’t Here, which exposes BDS and its supporters as antisemitic.

c) Support Jewish and pro-Israel students facing discrimination on campus. After three pro-Israel students at McGill University were targeted for their support of Jewish causes, B’nai Brith launched a petition (which now has more than 5,350 signatures) demanding that McGill’s administration investigate. McGill has since complied with this request.

On #GivingTuesday, please consider giving back to your community – by supporting Canada’s oldest self-funded and independent Jewish organization. Even the smallest donation helps in our objective of eradicating the racism and antisemitism that threatens our society today, defending the Jewish State of Israel, and supporting the members of our community.

Thank you for your commitment to B’nai Brith Canada.