The McGill ‘Punch A Zionist’ Student Must Be Expelled

Montreal is a city rich with post-secondary educational institutions, with one such venerable university, McGill, considered the most “Ivy League” of them all.

But McGill has recently had its share of problems, particularly concerning members of its Jewish community. For example, precisely one year ago, some 60 per cent of McGill students who voted supporting adopting the boycott, divestment, and sanctions (BDS) movement against Israel.

It was the third time in eighteen months (page does not exist) that the motion was presented. It later failed to be ratified in a subsequent online referendum.

Though BDS presents itself as a “human rights” movement in support of the Palestinian people, many have successfully argued that the movement really only has one agenda: to delegitimize the State of Israel.

Ergo, BDS is fuelled not out of compassion for marginalized communities but out of a cold, unmistakable hatred of Israel. That’s why BDS supporters would rather further an anti-Israel narrative and support boycotting a company like SodaStream – despite the fact that said boycott would result in dozens of Palestinian workers losing their jobs.

At McGill, after its administration denounced BDS last year, it appeared that the air of hostility was finally getting lighter for Jewish students and supporters of Israel.

On Thursday, Feb. 9, 2017, B’nai Brith Canada revealed that a representative of the Students Society of McGill University (SSMU) by the name of Igor Sadikov had urged his Twitter followers to “punch a Zionist today.” The tweet has since been deleted.

The word spread swiftly through social media before mainstream publications like The National Post, CBC and Global News picked it up, and there were immediate calls denouncing Sadikov’s actions. B’nai Brith also led the charge demanding that Sadikov resign.

Sadikov eventually issued a statement where he shared his “regret,” but otherwise essentially justified his tweet. It most certainly did not serve as an apology. Ironically, you’ll notice that he does not “condone nor advocate violence on the basis of membership in any identity group,” whilst simultaneously refusing to apologize for encouraging violence against an identity group, even if it’s an identity group he strongly disagrees with. 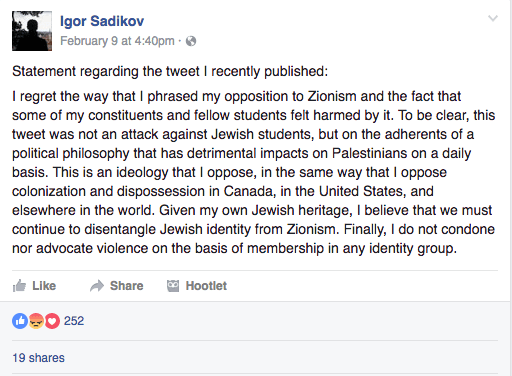 While Sadikov and others who support his point of view may see Zionists as being separate from Jews, that is in fact a fallacy. Yes, there are non-Jewish Zionists, and there are also Jews who are not Zionists. But Zionism and Judaism are instinctually and undeniable linked. Just look at the definition of Zionism: “The national movement for the return of the Jewish people to their homeland and the resumption of Jewish sovereignty in the Land of Israel.”

That’s it. No statements about “occupying” Palestinians, no racist screed condemning Arab or Muslim communities. Just a belief that Jews deserve the right to have an autonomous homeland in the State of Israel, where thousands-year-old archaeological, historical and genetic evidence proves was occupied by Jewish people long before Islam was even a religion.

It’s truly difficult to justify the phrase “punch a Zionist” as anything but antisemitic, especially given Sadikov’s expanded explanation. It is, at its core, thinly veiled anti-Semitism.

It’s also a perpetuation of a false narrative that Israel is somehow the aggressor and solely at fault for the Middle East crisis. To those who still believe this lie, I’ll refer you to the following video:

As a student representative elected by fellow students, Sadikov is supposed to speak on behalf of all students, whether Conservative, Liberal, Socialist, Zionist, etc. One can only imagine how Sadikov’s actions affect pro-Israel students at McGill. As former news editor of The McGill Daily, he has also used his influence to fit a political agenda, openly censoring pro-Israel content on the grounds that Zionism is a product of “settler colonial ideology.”

Secondly, Sadikov clearly advocated for violence in his tweet (and his weak Facebook “apology” belies that), which potentially puts Jewish and pro-Israel students in danger.

If Sadikov is allowed to stay at McGill, given his initial tweet and suggested action against Zionists, it sends a very strong message to all those who discriminate based on identity in any group.

This puts all students at risk: visible minorities, the disabled, members of the LGBTQ community, students who speak different languages, etc. Bullies need no reason to target others, but intolerant hate-filled individuals like Sadikov go beyond that: their reasons are differences of others, based on identity.

Should Sadikov be allowed to remain a student at McGill, the precedent it sets is treacherous for all students at any university, city, province, and yes, any country where hate speech is allowed to flourish unpunished.

McGill University is an internationally-renowned institution. Its international student body is extensive (roughly one-third of enrolment is international, according to registration statistics as of Fall 2016.) 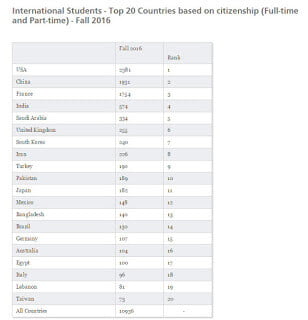 What would happen if potential McGill students in the international community were to find out that an elected student representative was not sanctioned after he encouraged the rest of the student body to punch Zionists? What would happen if parents of students discovered that not only was a student given a platform to express his hatred of other identity groups (Jews, Israelis, Zionists, whatever) but was also allowed to encourage violence without facing any consequence?

Needless to say, the university could stand to lose a great deal of its income.

Sadikov has angered a great number of people, Jews and non-Jews alike, with his offensive tweet and ill-informed media interviews. But he’s also had many openly support him and his beliefs about Zionism. In this case, history can serve as a perfect, effective guideline to use for us to inform our actions.

While I do not invoke comparisons to Nazi Germany casually, I will mention that not too long ago, Jews in Eastern Europe were being attacked in a similar manner in the years leading to World War II. Sure there wasn’t the Internet then, but there was media, and there were posters, songs, jingles, and other forms of propaganda from Nazi Germany to perpetrate violence against Jews.

How are Sadikov’s actions in encouraging violence against Zionists (the majority of whom are Jewish) any different?

Jews were subjected to hatred borne by those who needed very little in the way of a reason in order to harm or kill them. And now, Jewish students – Zionist or not – are again being subjected to the very real possibility of violence against them, encouraged by a SSMU member who was elected to represent them.

How is this okay? Jewish students at McGill are baffled that Sadikov would not only be permitted to remain a member of the SSMU (which as of this moment, he still is), let alone a student at McGill University.

“It’s appalling that a student representative is calling for violence against a certain group of people,” said one such student, Simon Paransky. “And it is not an isolated incident. It is happening in a context of increased hostility to students on campus, mostly students of Jewish faith but also students of non-Jewish faith who are allies of Jewish students.”

There are many of us mobilizing to protest Sadikov’s existence at McGill and his continued status as a student representative. We are calling upon McGill University to expel him, or – as the most recent reports say – force his resignation.

If he is allowed to stay, I hope pro-Zionist voices in the community will govern themselves accordingly. Funding should be stopped. Enrolment should be stopped, and perhaps transfers out of McGill must become the norm.

Sadly, it is only the threat of financial loss – and/or negative publicity – that will force the hand of the University. And who knows if even that will help? We all hoped that after Paul Bronfman withdrew funding from York University over a blatantly anti-Israel mural that it would be removed – and still it remained, despite the chorus of voices who opposed it.

This problem of anti-Zionist and antisemitic rhetoric on our campuses is not going away. We should all be speaking up and railing against the tolerance of violent rhetoric, antisemitism, and hatred condoned by an internationally-renowned institution of higher education.

If McGill does nothing about this, they are indeed condoning, perhaps even endorsing, Sadikov’s call for violence.

I understand that not all of us are activists, and that many of us prefer to remain silent on polarizing issues such as this. But remember the words of Dr. Martin Luther King, Jr. “In the End, we will remember not the words of our enemies, but the silence of our friends.”

If you are as incensed as so many of us are, please speak up. Share this article. Talk about it with your family and friends. Let McGill University know that you do not support their permitting Igor Sadikov to remain on campus, much less as a student representative.

You would not only be speaking up on an issue that deserves attention, but you’d also be investing in the future of humanity.

Will you join us?

Lissa Albert holds a Masters degree in Educational Technology, and is a writer and consultant. A proud Jewish Montrealer, Lissa writes about issues that cover a wide range, and is a staunch supporter of the State of Israel.