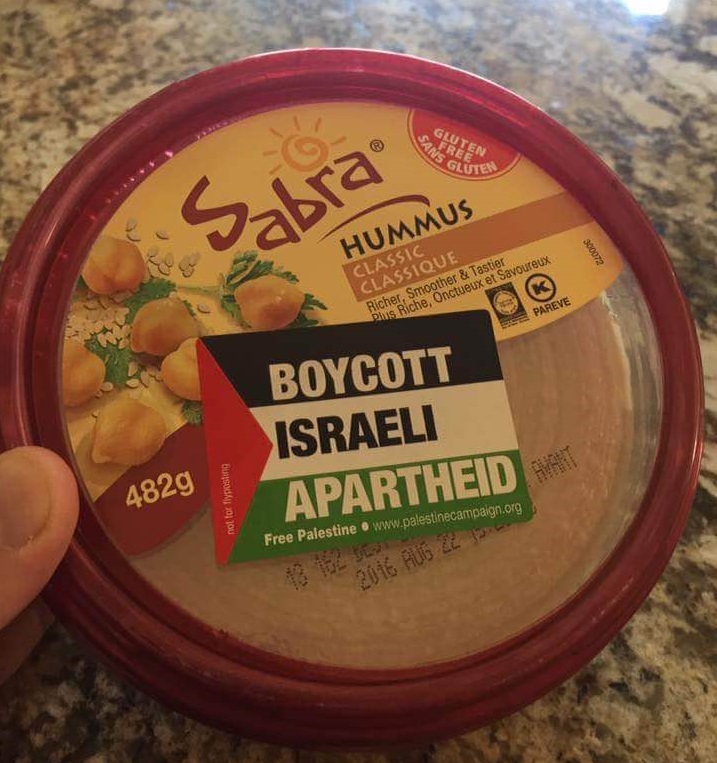 A sticker containing the words “Boycott Israeli Apartheid” was found on a Sabra Hummus container at a Sobey’s supermarket in Thornhill at the corner of Bathurst Street and Rutherford Road (not to be confused with the ‘kosher market’ Sobey’s located at Clark Avenue and Hilda Avenue).

A photo of the container was posted to Facebook on Sunday after it was purchased by a customer. The sticker also contained the phrase “Free Palestine” and the website address for palestinecampaign.org.

B’nai Brith Canada spoke to a member of the supermarket’s management team, who wished to remain anonymous for this report. The management member explained in detail how upsetting it was that this occurred and that Sobey’s has taken several actions to investigate the incident.

“This is vandalism, bullying and completely unacceptable,” said the management member. “We don’t condone this kind of activity and we’re doing everything we can to determine who did this and how it happened.”

B’nai Brith Canada can confirm that the supermarket has brought the matter to the Sobey’s head offices and that an internal investigation is being conducted by its Loss Prevention department. The management member said that police have not been contacted and will not do so until the Loss Prevention department investigation is completed. Sobey’s will only then contact the police if the investigation recommends it. The management member added that a Sobey’s press release on the incident may be released within the next few days.

According to CIJNews, the customer contacted York Region Police to report the incident but was told that it did not fall under the category of a hate crime. Instead the matter would be assigned to the Diversity, Equity and Inclusion Bureau.

The management member also expressed disappointment that the container in question was not brought to the attention to the supermarket staff by the customer who purchased the item and publicized it on Facebook.

“It’s understandable that some people are uncomfortable being the ones to notify authorities about these types of incidents,” said Amanda Hohmann, National Director of The League for Human Rights at B’nai Brith Canada. “We would encourage anyone who sees an example of BDS or antisemitism in our community to contact our anti-hate hotline at 1-800-892-2624. A big part of my job is to advocate on behalf of the community when situations like this arise. The more calls we get about a particular incident, the stronger our advocacy efforts can be.”

B’nai Brith Canada can also confirm that no other stickers could be found on any other Sabra products in the store, which are located in an area explicitly entitled “Kosher Section,” at the time of this article’s publication. It is worth noting that the Sabra Dipping Company is a US-based company, albeit co-owned by PepsiCo (US) and the Israeli food company, Strauss.

Thornhil MPP Gila Martow was angry about the incident.

“It’s upsetting for the community but also for the broader community outside Thornhill,” Martow said in an interview with B’nai Brith. “We shouldn’t however not just take this message to heart and be upset. This should be a chance for people to learn about BDS and be able to stand up for Israel when it’s unfairly criticized.”

B’nai Brith Canada has offered its services and resources to Sobey’s to help assist in the investigation of the incident.