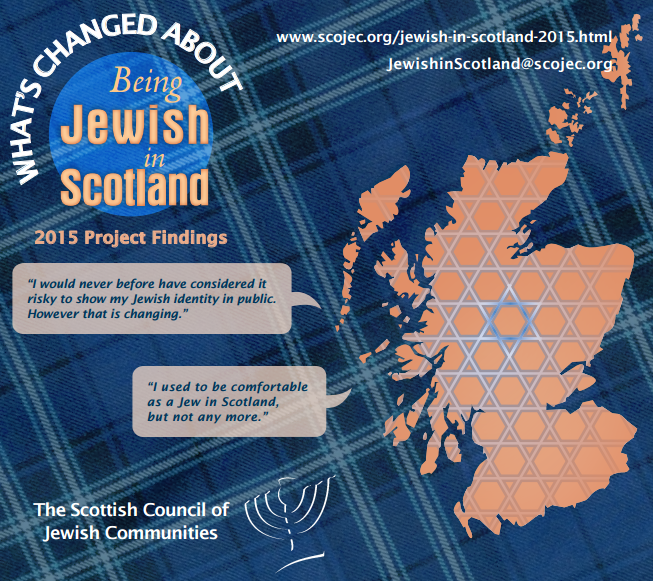 A report from the largest Jewish organization in Scotland says Jews have in the past few years become increasingly less comfortable and more fearful living in the country.

The findings of the Scottish Council of Jewish communities (ScoJeC) report showed that close to one-third of the 300 people who were surveyed, expressed feelings of "heightened level of anxiety, discomfort or vulnerability." Even more alarming was that one in six respondents told said they now keep their Jewish identity secret.

One of the surveys was administered just after 2014, which was prompted by a massive increase in antisemitic incidents reported in conjunction to Israel's war with Hamas in Gaza. Many Scottish councils flew Palestinian flags in solidarity with the people of Gaza during that time as well.

“So many Jewish people told us that they were feeling uncomfortable and anxious and even afraid to go about their day-to-day activities, that the Scottish Government was concerned enough to fund a further study of how the experience of Being Jewish in Scotland had changed,” ScoJeC wrote in the report.

Many answered that they were contemplated leaving Scotland, while 13 percent expressed distrust with the police, particularly regarding reports involving antisemitism.

However, the reported noted possibilities of improvements as a result of the Scottish government boosting financial commitments to ScoJeC.

“It is reassuring that the Scottish Government has listened to these findings, and is taking the concerns of our respondents seriously,” said ScoJeC Director Ephraim Borowski. "The government has increased financial support for SCoJeC’s work “to ensure that Jewish people in Scotland feel safe, secure, and supported,” he added.

The entire report can be found here.