Say NO to “Swastika Trail” in Ontario 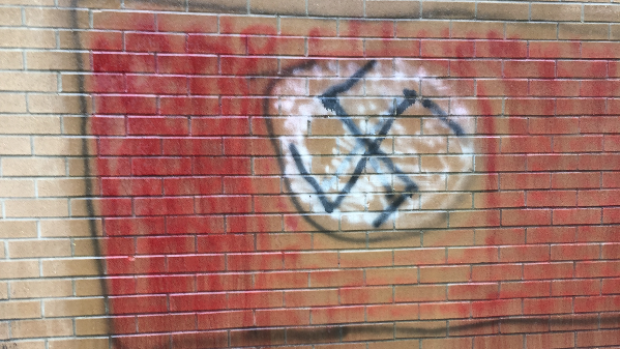 A barrage of racist graffiti has resurfaced in recent months, like this swastika that defaced the walls of a high school in Vaughan, Ont. last June

PUSLINCH, Ont. – B’nai Brith Canada is calling on Canadians of good conscience from across the country to help remove the name “Swastika Trail” from an Ontario town by signing a petition that will be presented to the town’s council.

On Dec. 20, 2017, the Township Council of Puslinch, located 75 kilometres west of Toronto, will consider whether to rename the controversial street name, which has borne the moniker “Swastika Trail” since the 1920s.

For months, B’nai Brith has been working with local residents to change the street name. Many of them say they are embarrassed by the Trail’s name, especially when forced to use it on drivers’ licences and other government documents.

He added: “Tens of thousands of Canadian servicemen made the ultimate sacrifice to combat Nazi tyranny. Millions more were victimized by the evil depravity symbolized today by the swastika. Maintaining this street name would be an insult to Holocaust survivors, and a gross disservice to our veterans.”

B’nai Brith will present its petition to the Puslinch Township Council at its Dec. 20 meeting.

Please click here to add your name to the petition.