MONTREAL – David Birnbaum was 58 years old in the Spring of 2014 when Philippe Couillard asked him to be the Liberal candidate for the National Assembly in the riding of D’Arcy McGee, which includes the predominantly Jewish municipalities of Côte Saint-Luc and Hampstead.

The Liberals were in opposition at the time and Couillard had just been named leader, succeeding Jean Charest. There was a Parti Québecois minority government in office and early polls predicted that the separatist party would remain in power, possibly with a majority. However, the PQ’s unpopular Charter of Values and star candidate Pierre Karl Peladeau’s fist pump for separation helped glide the Liberals into power.

Birnbaum succeeded Lawrence Bergman as the MNA, big shoes to fill given that the latter had not only served 18 years but was known to many as the de facto Minister of Jewish Affairs.

It was therefore no surprise on April 16 that Birnbaum was formally nominated to run for the Liberals again in the Oct. 1 provincial election. “If I waited until the age of 58 to get into this game, it was because I wanted to spend time with my wife and kids,” he told an audience packed with supporters at a local elementary school gymnasium. “There are easier ways to make a living. It is a rough and tumble activity at times.”

Birnbaum made national headlines only days before his nomination after wearing his kippah in the legislature on the occasion of Yom HaShoah. "I wore it in solidarity with survivors, but also with the understanding that I could wear that kippah in Quebec without an ounce of fear and that I could aspire to any job whatsoever in Quebec," he said.

B’nai Brith Canada is standing in solidarity with @DavidBirnbaum1, a Jewish member of the #Quebec National Assembly, after his use of a religious head-covering in the legislative chamber was criticized by Leader of the Opposition @JFLisee. #qcpoli #cdnpolihttps://t.co/suio9lt7KH

PQ leader Jean-François Lisée helped catapult Birnbaum into the spotlight by breaking legislature rules the next day and wearing his party’s pin, using that as an opening to compare it to the kippah. "I am okay with the member who wore a kippah yesterday, (but) we should also be allowed to display our political convictions," he said.

Birnbaum has been given a rough ride from some constituents for the Liberals' budget cuts over the last four years, particularly in the health sector. The kippah incident and his stern response to Lisée, however, has resulted in plaudits being tossed his way.

The most recent opinion polls show the Liberals and the Coalition Avenir Québec neck and neck at the top, with the PQ far behind. While Birnbaum’s seat is probably the safest in the province, he does not take anything for granted. He proudly spoke about accompanying Couillard to Israel last spring, marking the first time a Quebec Premier has headed a mission to the Jewish State. The Jewish General Hospital, Birnbaum added, will be getting new funding to proceed with phase four of its expansion plans. 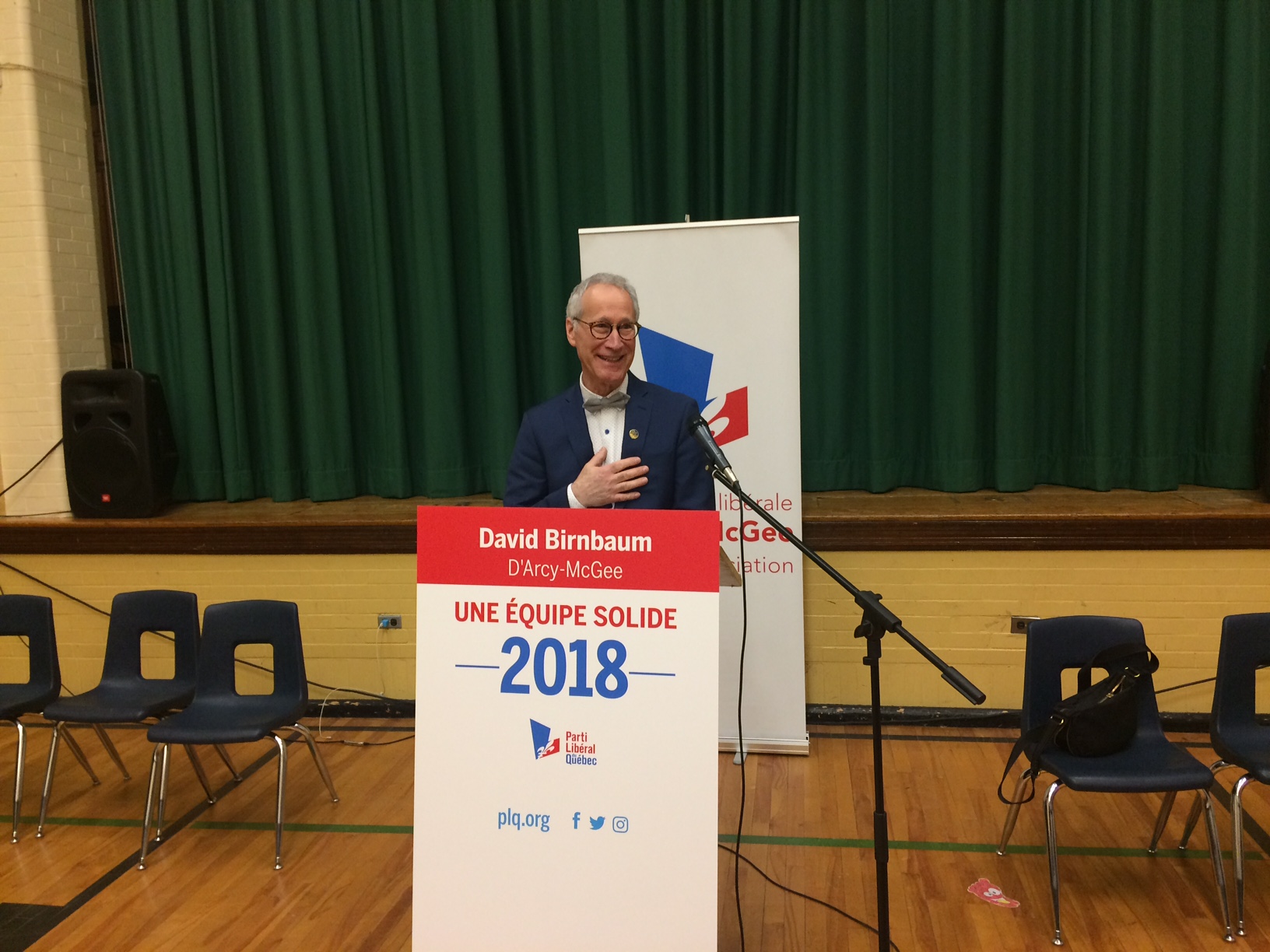 Birnbaum then took aim at Francois Legault, the leader of the CAQ and Couillard’s chief adversary, calling into question his positions on immigration and minorities. As for the PQ, while Legault has pledged not to campaign on sovereignty, Birnbaum said that this still remains very much part of Lisée’s agenda.

.@MichaelMostyn: "The suggestion that a Jewish MNA should be barred from expressing his religious identity in the National Assembly – on #HolocaustRemembranceDay, of all days – is grotesque and unacceptable." #cdnpoli #qcpoli @DavidBirnbaum1 https://t.co/K44Q3UcBG1

On hand to support Birnbaum at his nomination were Minister of Finance Carlos Leitão, Minister of Anglophone Affairs Kathleen Weil, Minister of Economic Development Dominique Anglade and East End MNA Rita De Santis. Municipal politicians and many Jewish community leaders were on hand as well. Herbert Marx, who served as the D’Arcy McGee Liberal MNA from 1979 to 1989, also attended. John Parisella, a former chief of staff  to Quebec Premiers Robert Bourassa and Jean Charest, provided opening remarks and called Birnbaum a “symbol of what it is like to be a Parliamentarian.” 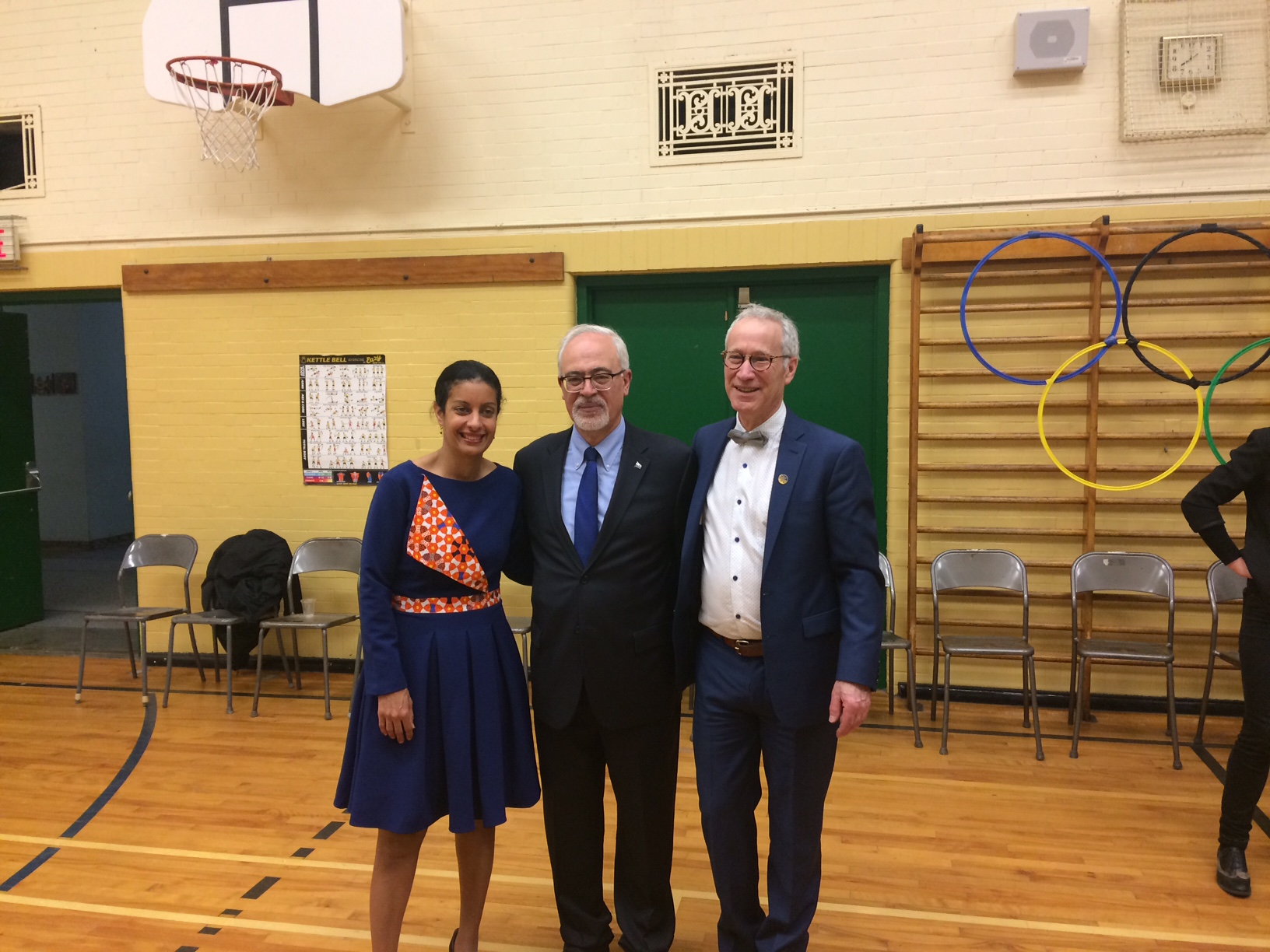 The CAQ has not announced its candidate for D’Arcy McGee, but some well-known personalities in the Jewish community have confirmed they have been approached by Legault directly.