Protest the Brutality of the Iranian Regime This Sunday 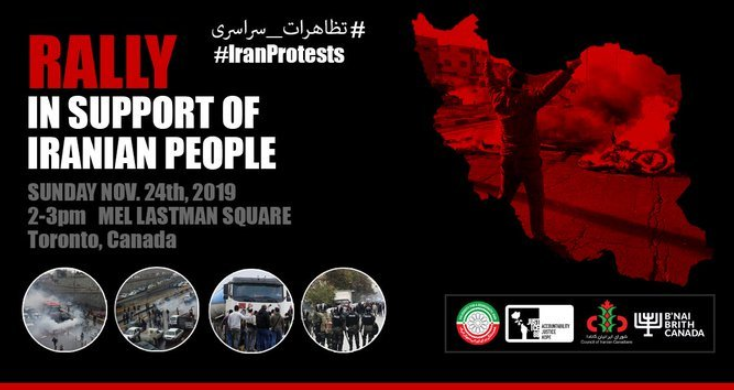 TORONTO – Solidarity for a Democratic Iran, Council of Iranian Canadians, Justice 88 and B’nai Brith Canada invite you to join us at an urgent public rally to show your support for the people of Iran this coming Sunday, Nov. 24 in Toronto.

What: Rally to Support Iranian Protesters

In a desperate effort to cling to power, the Iranian regime is in the midst of a brutal crackdown against its own brave citizens, who are demanding their basic human rights of equality and freedom. The Iranian regime is the world's premier state-sponsor of terror and a ruthless totalitarian government that represses its own women, political dissidents and religious minorities.

In the wake of spontaneous protests by the people of Iran, the regime has turned off the internet, preventing its citizens from communicating to the outside world.

Hundreds are dead. Thousands have been arrested. Countless lives are in jeopardy.

Only by shining a public spotlight on the Iranian protesters can we hope to avoid a bloodbath in Iran.

People of all backgrounds, faiths and ethnicities must stand together in solidarity to demand human rights for the people of Iran and an end to the regime's violence and tyranny. If you are in Toronto, please join us on Sunday to make your voice heard.

Let's show the Iranian regime that the world is watching - and that we will not be silent in Canada!