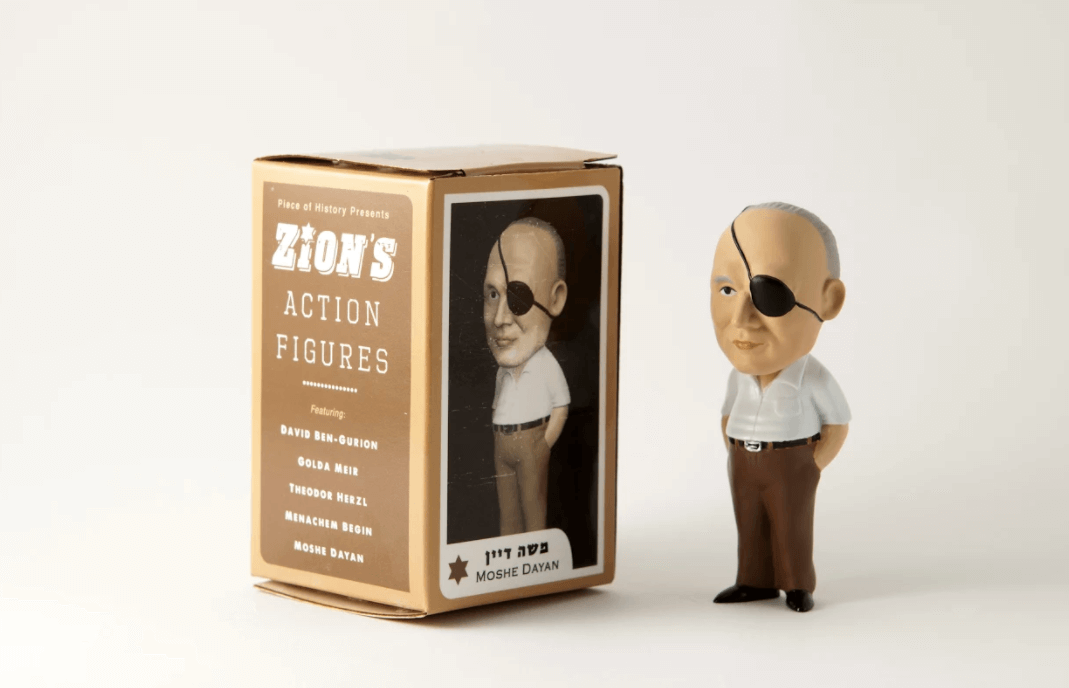 In honour of Yom Yerushalayim (Jerusalem Day), B’nai Brith Canada is celebrating some of our favourite Zionist heroes, commemorating those who’ve made immense contributions to the State of Israel and whose legacies will never be forgotten.

In a bid to celebrate fifty years since the reunification of Jerusalem, the eternal capital of the Jewish people, we want to know who’s YOUR favourite contemporary Zionist! Let us know using the hashtag #JewInspiresYou. The most inspirational entry will win a four-pack of Zionist action figures courtesy of Piece of History, including David Ben-Gurion, Menachem Begin and (of course) Moshe Dayan.

Born on the Kibbutz Degania Alef (Israel’s first kibbutz) in 1915, Moshe Dayan learned to fight at only 14. He learned Guerilla warfare with Haganah (a Jewish paramilitary organization in the British Mandate of Palestine) and remained active until 1939 when he was sentenced to two years in prison for his activities. Dayan joined the British Army immediately upon his release, and lost his left eye during battle. He later began sporting the signature black eyepatch that he would wear from then on.

Dayan’s military prowess would soon be put to use when the 1948 Israeli War of Independence broke out. He fought with bravery and cunning, defending Jewish settlements and stopping the Egyptians in the south. His clear skill and military instincts led to his promotion to Chief of Staff of the Israel Defence Forces in 1953.

Although there was official peace during that time, Israel was continuously bombarded with terrorist attacks supported by its Arab neighbours. Dayan considered this another stage of war and insisted on consistent retaliation. He drew the Arab forces into battle before they had time to completely rebuild which led Israel to victory in the 1956 invasion of the Sinai Peninsula.

Dayan left the army for politics in 1958, joining the Mapai Party under his mentor, Prime Minister David Ben-Gurion. He was appointed as Minister of Defence just days before the outbreak of the Six Day War. When Syria persistently shelled Israeli villages, Dayan made the call to attack. The war was a huge success for the Israelis, marking the reestablishment of Jewish sovereignty over the ancestral lands of the Jewish people.

In 1977, then Prime Minister Menachem Begin approached Dayan to become Minister of Foreign affairs. Unlike his previous appointments, the prize for Dayan here would be negotiating peace, not victory in war. He proved to be up to the task.

He delivered this peace (and catapulted his legacy from military leader to revered statesman) by securing the landmark treaty with Egypt where Israeli control over the Holy Land was recognized in exchange for the return of the Sinai Peninsula. This treaty represented a hope of sustained peace in the home of the Jewish people.

Dayan’s parents returned to the Holy Land and joined the first Kibbutz over 100 years ago with the Zionist dream of reestablishing the state of Israel. Their son, who came of age on the battlefield and made his mark at the bargaining table, would do a lot to achieve their vision.