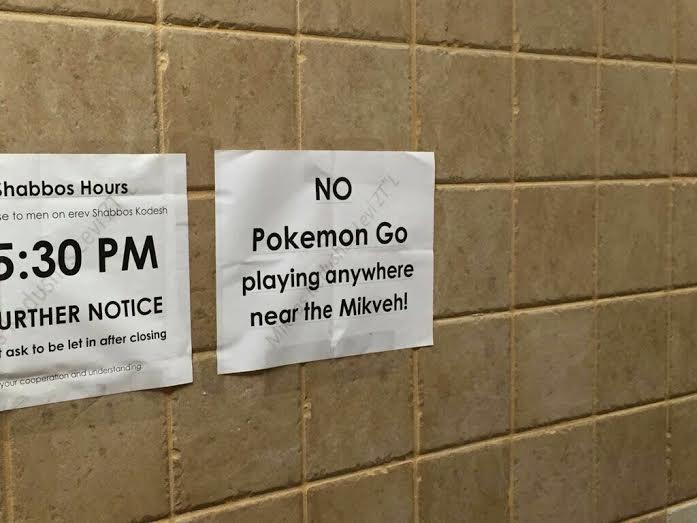 Pokemon Go, a new mobile gaming app, has unknowingly been sending its players to walk through sensitive Jewish sites.

Pokemon Go is based on the original Pokemon franchise series, encouraging players to walk, find, and catch Pokemon. To date, the app has amassed over 30 million downloads since it was released earlier this month.

The game uses the location tracker in smartphones to locate where users are and where they are in the game world. Players use their phone’s camera to find and catch Pokemon. While the concept of using a cell phone camera is not new to the gaming industry — something it has dubbed ‘Augmented Reality’ — has made it the first game to take the technology mainstream.

But the game is not without controversy.

The game has created a large amount of controversy as players have often been caught exploring dangerous or prohibited spaces including cemeteries, military bases and even the mikveh. As more and more players download the game, a number of institutions and organizations have had to take drastic action.

The U.S. Holocaust Memorial Museum, which serves as a “PokeStop” where players are encouraged to visit and collect free items, has called on the public to stop playing the game at the museum.  Andrew Hollinger, communications director for the museum, told The Washington Post that “Playing the game is not appropriate in the museum, which is a memorial to the victims of Nazism.” Last week a Koffing, a poison gas type of Pokemon, was found in the museum.

The mobile game has also led players to Auschwitz-Birkenau State Museum, a Nazi death camp turned memorial site. Museum spokesman Pawel Sawicki has had to ask the game producers to exclude the site from the game. Sawicki said that it was "disrespectful to the memory of the victims of the German Nazi concentration and extermination camp on many levels and it is absolutely inappropriate." During the second world war, an estimated 1.1 million people were systematically murdered in the camp, most of which were European Jews.

The locations where Pokemon and items can be found are randomly generated but certain types can be found in certain geographic areas. For example a water type Pokemon will more likely be found near water, however there is no evidence to suggest that the gaming app is intentionally sending its users to these sensitive sites. The app allows players to notify the game of sensitive spots or glitches, the game's producer continues to be notified of these places.