It’s been a bad year for educational textbook publishers.

Earlier this year, Nelson Education came under fire after publishing a textbook that implied Israel kidnaps and forces children to serve as soldiers in its army. After an intense campaign from B'nai Brith, both Nelson and the Ministry of Education vowed to remove each textbook from the roughly 800 schools across Ontario that were using it.

Now another company that publishes textbooks, Pearson Education, is drawing righteous criticism for somehow allowing a horribly racist section headed “Cultural Differences in Response to Pain” to be included in its textbook, Nursing: A Concept-Based Approach to Learning.

A brief introduction to the section explains that, “A client’s culture influences their response to and beliefs about pain,” before listing potential differences between the following groups: "Arabs/Muslims, Asians, Blacks, Jews, Hispanics, and Native Americans.” 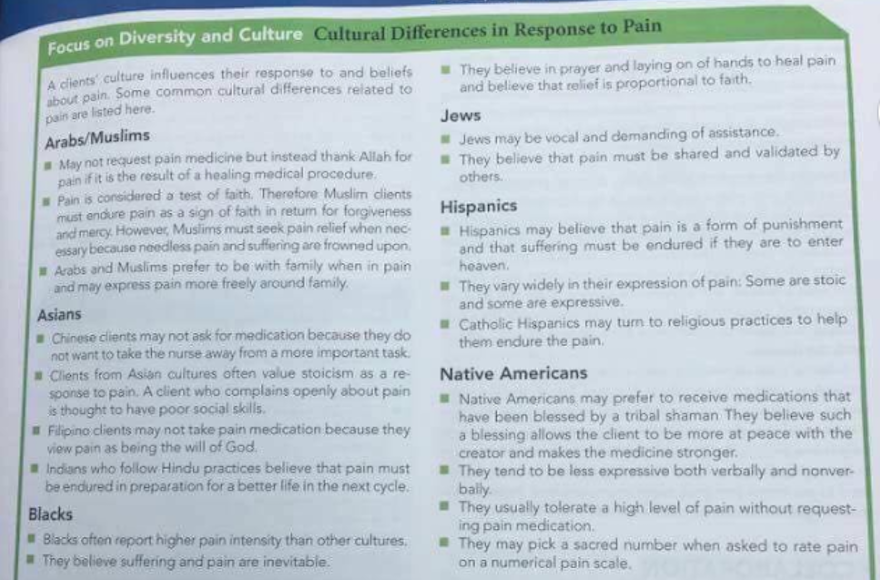 A page from "Nursing: A Concept-Based Approach to Learning"

Off the bat, it strikes me as odd that none of those headings didn't set of a red flag for a single Pearson employee during the editorial process. I mean, are Native Americans really one big homogenous group? Do all Asians really share the exact same cultural values? Can all Jews can be accurately described in just a couple sentences?

And what about when two cultural groups are combined? How would Pearson say a black Muslim, for example, might respond to pain? Pearson’s failure to recognize the problematic nature of the cultural groups listed in this textbook is in itself troubling and creates serious doubts about its credibility as educational publishers.

What has sparked most criticism is Pearson's heavy reinforcement of stereotypes here, some innocuous, some certainly more inappropriate. For the former, they are at least rooted on some sort of basis in religious or spiritual beliefs. For example, it posits that Muslims “may not request pain medicine but instead thank Allah for pain if it is the result of a healing medical procedure,” that Native Americans “may pick a sacred number when asked to rate pain on a numerical pain scale,” and that “Catholic Hispanics may turn to religious practices to help them endure the pain.”

As for the Jews, well, the Jews are just whiny. Seriously. That's pretty much what the textbook says.

“Jews may be vocal and demanding of assistance,” it states. “They believe that pain must be shared and validated by others.”

Aside from the complete generalization of Jews (and of all peoples here, really), Pearson is essentially accepting and spreading a pretty offensive and antisemitic stereotype here. No mention of Jewish religious beliefs, just a statement that Jews are likely to complain about their pain and “demand” help.

.@pearson's nursing textbook is exactly the reason POC are given sub-par medical treatment that borders on negligence. pic.twitter.com/DLzUdNJmBP

Meanwhile, Pearson has issued an apology and has promised to remove the offensive material from all products – both online and in print. In a statement, the company said it is “taking steps to correct this problem and ensure this does not happen again.”

While it's refreshing to see Pearson admitting to the culturally-insensitive nature of the ideas it published, the company's statement comes across as a very canned, disingenuous apology. It would be nice to see it address each of the offending sections it published, and have the writers and editors responsible explain why they thought this was acceptable.

Perhaps they even require cultural sensitivity training? Something B'nai Brith would be happy to provide (at least pertaining to Jewish culture and religion) by the way.

After all, these are the people responsible for developing the textbooks that teach our children and college students. How many students – and professors, for that matter - saw these words and accepted them, unquestioningly, as truth before one person finally recognized the material as inappropriate?

This is a problem that demands a more serious, careful response than just a canned statement and a promise that it won’t happen again. It's time for employers to be completely transparent when such incidents arise and, rather than quickly issue an apology to appease its constituents and avoid a PR nightmare, also ensure that the purveyors of such insensitive material learn why it was offensive to begin with.