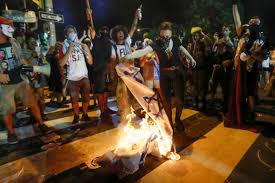 Palestinian flags were prominently on display both inside and outside the Democratic National Convention in Philadelphia Monday night, according to reports and eyewitness accounts.

One of those flags was raised right in the middle of the convention floor by activists who called themselves “Progressive for Palestine".

We at the FLA delegation just raised Flag of Palestine at #DNCinPHL during platform vote #ProgressiveforPalestine pic.twitter.com/g64VLfUxHe

“It doesn’t look like there are any American flags,” Daily Caller reporter Alex Pfeiffer reported. “The stage is bland and grey, with no red, white or blue present. A thorough look at the crowd present also turns up no American flags.”

The most alarming sight, however, might have been a pro-Palestinian protester chanting “long live the intifada," while burning an Israeli flag on Tuesday night.

Protesters also took offence to the Mississippi State flag, by participating in a “sit-in” under the flag outside the convention. They demanded that the flag be removed because it depicts the Confederate standard. After chants of “take it down” and denouncements of “racism”, city police acquiesced and took down the flag.

And as if that wasn’t enough flag folly, protesters were also spotted waving the flag belonging to the former communist empire of the USSR.

#DNCinPHL Protesters have no problem waving a marxist flag, but they see a confederate flag and they are triggered! pic.twitter.com/GuHTWqobe3

According to Fox News reports, police detained dozens of people, cited 50 for disorderly conduct but made no arrests.