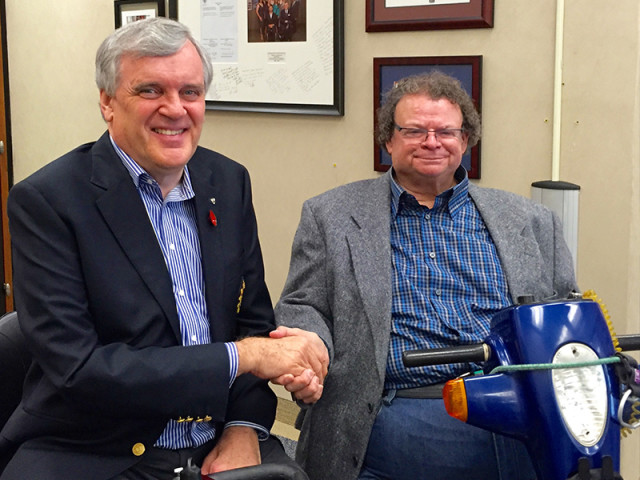 We are thrilled that Eddie Rice, Chair of B'nai Brith's Canadians with Disabilities committee, has played a key role in the official nationwide launch of the “fuelService” app in partnership with Shell Canada. The launch is taking place Thursday afternoon at the Yonge and York Mills Shell gas station.

This new app allows disabled drivers with mobility issues to pre-arrange with participating Shell stations to have their vehicles filled up by an attendant. The app will provide a whole new level of freedom for disabled drivers, and promises to be a major gain for accessibility in Canada.

“Filling up the car is one of the biggest challenges for disabled drivers who might drive from station to station looking for help. But it’s also a challenge for gas stations, which are often single-manned and can’t help for security reasons. The fuelService app solves the problem for both parties,” Rice said.

Rice, who contracted polio at a very young age, is personally affected as a disabled driver. He has worked on finding and implementing an app of this sort for many years.

In addition to helping to launch this new app, Rice is also a principal of an organization, the Canadian Coalition for Mobility Challenged Drivers (CCMCD), started in 2017.

Rice’s personal story is inspiring. He never allowed his polio condition, which first affected his lower body and then in his 30s his upper body, to slow him down at all. He’s led a very active lifestyle, including swimming, bowling, horseback riding and even downhill skiing. He has also tried his hand at stand-up comedy.

Rice has been active in B’nai Brith for 45 years, including a long affiliation with a Lodge for which he edited its newspaper. Married since 1987, Rice says he had a “ready-made family” with his wife’s three children from a previous marriage. He now has eight grandchildren.

Among other business ventures, Rice worked professionally as a prosthetist at Sunnybrook Health Sciences Centre until upper-body limitations made it impossible to continue. As his mobility became increasingly restricted, Eddie became more determined to find solutions. He began working with B’nai Brith’s League for Human Rights, which, by the mid-90s, had turned its attention to AODA — Ontario’s Accessibility Legislation. This legislation finally passed in 2005.

Because Ontario’s legislation had no provision for full service for disabled drivers, Rice took it upon himself to educate the government and industry about the need for this essential service. It took many years of trying and overcoming many obstacles along the way, but Rice never gave up.

The official launch of the “fuelService” app today is the culmination of many years of efforts by Rice and other caring activists committed to helping those in need.

"Eddie’s story – his dedication to an important cause on behalf of millions of Canadians – is an inspiration to us all, " said Michael Mostyn, Chief Executive Officer of B'nai Brith Canada. "While he’s intensely modest, we all owe Eddie our gratitude. His determination against all the odds is staggering.

"Never give up – Eddie shows the way. The launching of this app is a victory to celebrate."

community service Eddie Rice fuelService Canadians with Disabilities mobility
Published : Sep 03, 2020
Do you like this post?
Tweet
Have you experienced antisemitism, racism or discrimination? Report an Incident