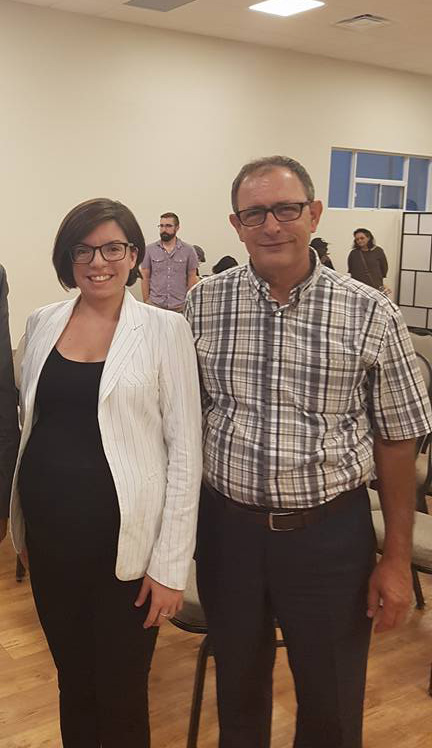 TORONTO - NDP leadership candidate Niki Ashton has been endorsed by a controversial Canadian-Palestinian figure with a history of Holocaust denial.

In a public August 15 Facebook post, Nazih Khatatba wrote that it was a "duty and responsibility" to register as an NDP member in order to vote for Ashton, who Khatatba said is "known for her pro-Palestinian positions and BDS". The endorsement came after Ashton met Khatatba and posed for a photo with him at an August 11 campaign fundraiser in Mississauga, Ont. hosted by the Palestine Aid Society.

In January of 2017, B'nai Brith Canada drew attention to an Arabic-language program on Rogers TV, in which Khatatba called Jewish suffering a "fairy tale" and engaged in Holocaust denial. Rogers swiftly responded by dropping the program from its channel.

Ashton also received a front page endorsement in the August 18 edition of al-Meshwar, an Arabic-language newspaper edited by Khatatba, an important figure in the Mississauga Palestinian community. Khatatba has previously used al-Meshwar to support acts of terrorism, including a 2014 massacre at a Jerusalem synagogue in which six Israelis, including one Canadian citizen, were murdered. In 2015, another editorial in al-Meshwar called Judaism a "terrorist religion" and claimed that killing is ingrained in Judaism.

B'nai Brith sought comment from Ashton on her endorsement by Khatatba, but received no response. B'nai Brith has also raised its concerns with the NDP leadership at the highest levels.

"This is an extremely troubling development," said Michael Mostyn, Chief Executive Officer of B'nai Brith Canada. "In living memory, no Canadian politician from a major party has ever been endorsed by a Holocaust denier and then refused to distance herself from the endorsement.

"The year 2016 was the worst on record for antisemitic incidents in Canada, and this month's events in Charlottesville, have shown that the threat against Jewish communities remains visceral and real. We are still waiting for Ms. Ashton to do the right thing, and distance herself from the endorsement of a newspaper with a long history of antisemitism."

NDP members will begin voting for their next leader on September 18, 2017.

*UPDATE: August 24, 2017 - Nazih Khatatba has published a Facebook post in which he says he now recognizes the genocide of more than 6-million Jews in the Nazi Holocaust. To read his full statement, click here.*