MONTREAL – Born in Poland, Sidney Zoltak was eight years old at the outbreak of World War II. Thanks to the bravery and kindness of a family of strangers who hid them in their barn, his family survived to the end of the war. Today, he is one of Montreal’s foremost spokespersons about the Holocaust while also working towards the preservation of the Yiddish language.

The concert will take place on Thursday, June 21 at 8 p.m. at the Segal Centre, in partnership with the Montreal Holocaust Museum.

“I got started on this project about 25 years ago,” Zoltak said in an interview with B’nai Brith Canada. “A few friends and I recorded some 20 Yiddish folk songs on a home sound system to keep for our grandchildren. It turned out really well and some people even suggested we sell it. I promised that I would do something with it one day. Well, it took me over 20 years to make good on that promise.” 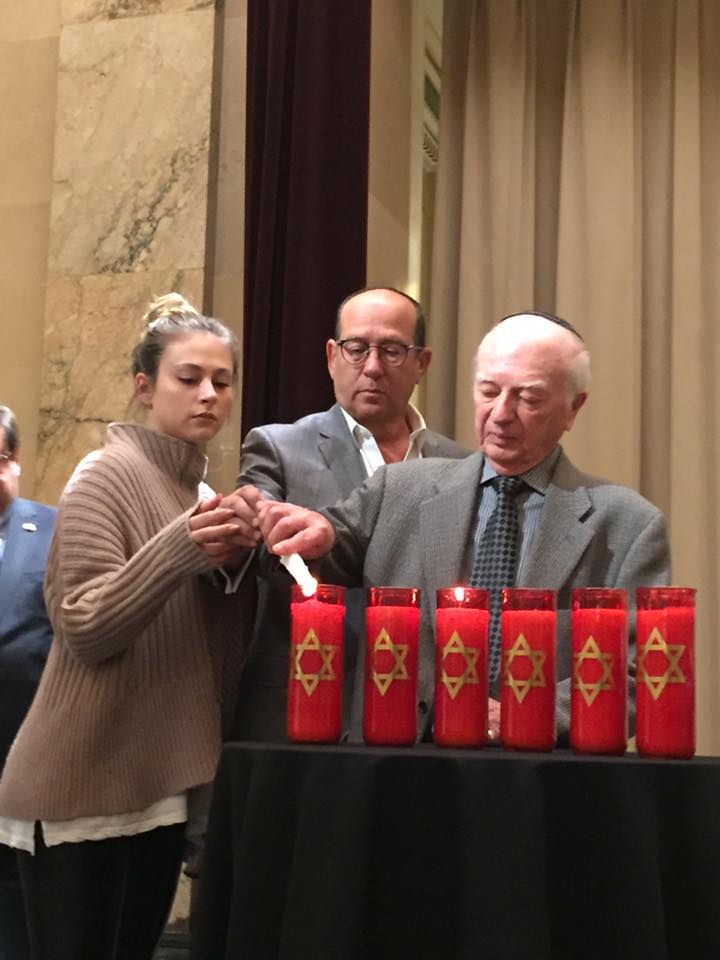 Sidney Zoltak participates in a Montreal Yom HaShoah ceremony with his son and granddaughterWhen ordinary language fails, poetry and song find expression, Zoltak said, adding that the songs express despair but also hope. Zoltak emphasized that they were written in the midst of suffering and horror and sung in ghettos and concentration camps. They are a testament to the human spirit, he said, and to enduring humanity and creativity in the maelstrom of an inhumane world.

Zoltak decided to fund the album as a “legacy project” and approached survivors for donations. “The response was overwhelmingly positive,” he said. “I was able to bring in $20,000 and with that we produced a very professional album. Now we have a documented legacy of the bravery and resilience of those who actually wrote the lyrics to these songs”

There is also a 56-page insert detailing the stories behind the composers and lyricists.

“Through the lens of these songs and the accompanying written material, one is able to get a very important understanding of what those individuals were living through and how they tried to cope,” said Gonshor. “It is a very sobering realization for all those who are interested in trying to come to terms with the enormity of the disaster that the Shoah represents.

“We are all excited about the launch because it represents the public completion of the project. It also heralds in a new phase in this project, which is to have this concert performed in different cities for a myriad of different events, including the various gatherings of Holocaust survivors and Second Generation groups. The Segal Centre needs to be commended for its continued support of Yiddish-language programming, which is an important part of its ongoing commitment to Jewish programming for the community.”

Tickets for the concert are $15 or $30 including the CD. Click here for more info.