Zbar's death was sudden, and for those who knew him personally, not to mention the thousands who were connected to him via social media, it was a huge blow. Not only does the mourning continue, but a quiet campaign has been launched to have Montreal Mayor Denis Coderre to recognize him.

So what did Barry Zbar do to merit such praise?

Like many people in the Jewish community, Zbar had a talent for unity. On Nov. 8, 2010, he created a Facebook page called Montreal Memories, which at first he intended to manage as a small hobby. However, over the course of over seven years, membership surpassed over 22,000 people, and this semi-retired accountant found himself working on the project virtually 24/7.

Just a few weeks before he passed away, Zbar fired off one of his regular emails to me, discussing his intention to get a Montreal radio station to interview him about the page’s success. He also did an interview in December, 2011 with Aaron Rand, a very popular Jewish broadcaster on CJAD, after the page  hit 1,800 members.

I told Zbar that I was going on holiday, but that we would reconnect upon my return. Unfortunately, I will never again have the opportunity to tell him once again what a remarkable job he did.

The page, of course, now carries on as his legacy (as a private group, Facebook users must request to become a member). Zbar moderated the page to ensure that it stayed clear of political debate. The conversation greatly focused on food – the restaurant scene in Montreal is top-notch, after all – and it was remarkable to see the conversations former Montrealers had with one another about the city's vibrant culture. Above all, this page is about nostalgia and I continue to visit it daily just to catch vintage photos.

“At least 75 per cent of our members are not current Montrealers,” Zbar told me when we chatted last spring. “We have representation from over 50 countries.”

There are many Jewish names on the page. This includes co-administrator Bev Ikeman of Florida, who will step into Zbar's big shoes. Montrealer Clifford Schwartz works on the marketing end of things, which includes a still relatively new montrealmemories.com website selling merchandise. There have also been different gatherings such as dinners in Montreal, Toronto, Vancouver, Florida and elsewhere. 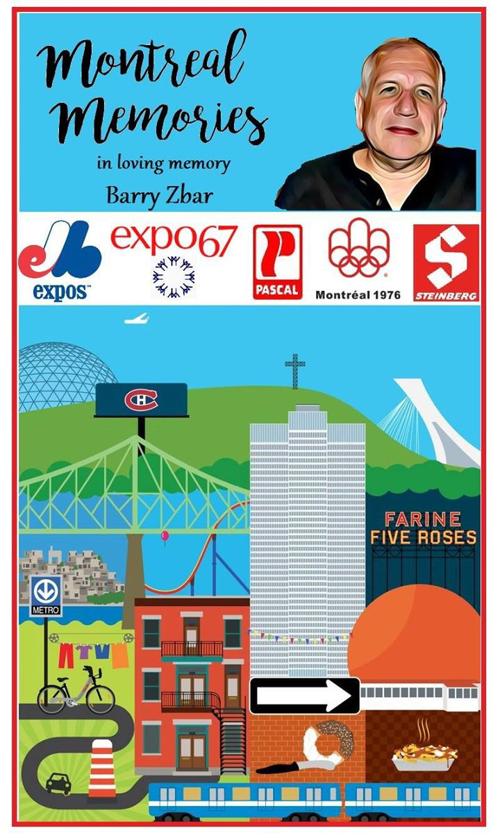 Ironically, Zbar seldom visited his old town. But he promised me that he was gearing to come here in the fall and the two of us would get together.

Indeed, with Montreal Memories, Barry Zbar has left an incredible legacy. I am sure his partners will continue to grow this page and I hope to connect with them.

In an interview I did with Zbar for B’nai Brith several years back, I asked him why he left Montreal. “I came here [Toronto] initially because of business and the Quebec political scene was making things difficult,” he said, echoing the sentiments of many.

Let’s hope Mayor Coderre, who is about to kick off a re-election campaign, will find a way to recognize Zbar and his great achievement.

Mike Cohen  is B’nai Brith Canada’s Quebec bureau chief. He can be reached at info@mikecohen.ca. Follow him on Twitter @mikecohencsl