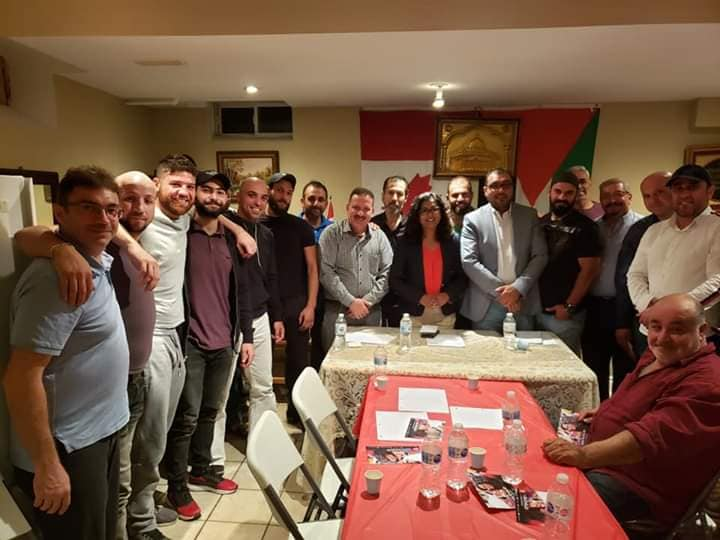 A photo received by B'nai Brith Canada shows Iqra Khalid posing at a recent event in the home of Amin El-Maoued, a radical anti-Israel activist. Last summer, B'nai Brith exposed Khalid for presenting a "Certificate of Appreciation" to El-Maoued and started a successful petition demanding that she rescind the certificate.

Following B'nai Brith's advocacy, Khalid apologized for the presentation, claimed she had not been aware of El-Maoued's background, and rescinded the certificate – stating that "antisemitism has no place in Canadian society" and condemning El-Maoued's views. The story received a significant amount of attention and backlash at the time.

El-Maoued is the leader of "Palestine House–Toronto." B'nai Brith has previously drawn attention to a 2017 rally that he led in Mississauga's Celebration Square, in which protesters called for the destruction of Israel, encouraged martyrdom and celebrated an ancient anti-Jewish massacre in the Arabian peninsula.

According to an Arabic-language comment on El-Maoued's Facebook page, a comment which was liked and responded to by El-Maoued himself, it was alleged that Khalid went as far as to apologize to El-Maoued at his home for her previous condemnation of him. Defending Khalid, El-Maoued wrote that "the bulk" of the criticism against him was directed, in part, by "the Zionist lobby" whose goal was to "crush" Khalid and "delegitimize (sic) Islamophobia."

Earlier this month, Ontario MPP Kaleed Rasheed rescinded an unrelated certificate to El-Maoued as a result of El-Maoued's controversial history, following B'nai Brith advocacy. Before starting his own organization, El-Maoued was the public relations chief of Palestine House, an organization who saw its federal funding cancelled in 2012 because of its "pattern of support for extremism."

"It is difficult to fathom how Ms. Khalid did not learn from the previous ordeal," said Michael Mostyn, Chief Executive Officer of B'nai Brith Canada. "Her renewed association with Mr. El-Maoued calls into question not only the sincerity of her previous apologies, but her credibility as well."