Just over a week ago, Kevin Myers, a writer for the Sunday Times Ireland, penned an opinion piece headlined “Sorry, ladies – equal pay has to be earned.”

Naturally, the op-ed stirred intense controversy for espousing misogynistic and antisemitic ideas. For one, he suggested that men get paid more because they’re more charismatic, hard-working and driven than women. He also said, “I note that two of the best-paid women presenters in the BBC – Claudia Winkleman and Vanessa Feltz, with whose, no doubt, sterling work I am tragically unacquainted – are Jewish. Good for them. Jews are not generally noted for their insistence on selling their talent for the lowest possible price, which is the most useful measure there is of inveterate, lost-with-all-hands stupidity.”

The Times later removed the op-ed and issued an apology, though most agreed that it was two little and too late at that point.

While organizations have already pointed out how Myers’ comments are counter to the values of feminism and egalitarianism, I’d like to discuss his use of age-old antisemitic trope of how Jews are “good with money.”

Firstly, I have to ask, how the heck did this make it past the Times’ vetting process? I understand that editorials can be notoriously controversial and often contain a disclaimer that the opinions expressed do not necessarily reflect those of the publication. But how could the editors allow the line about Winkleman and Feltz? Did they not realize the context?

Could it be that they probably didn’t even notice it? And that this kind of casual antisemitism is so widespread that Myers and his editors didn’t even realize it was offensive? Only following the article’s publication, amidst a Twitter-storm of angry comments and his subsequent removal from the Times, did Myers admit his mistake, claiming that “he made a wrong call” in penning the editorial, and accepting the fact that his statement was "what looked a like a return to the old tropes of the money-grasping Jew."

Even in his “apology,” however, Myers pulls a Roger Waters and uses the “I have many Jewish friends” card, which doesn’t seem to be convincing anyone, especially his critics – myself included.

Myers, rejecting any claim that he was antisemitic, then told stories about how he knew “an artistic boy called Goldstein” (although they never became friends), and how he thought Jews “were a little bit more watchful,  a little bit more intelligent than the other boys around,” or how two of his most “serious relationships with women were with Jewish girls – both of them American I should tell you.”

There are several things wrong with this explanation. First, Myers is clearly still making sweeping, generalized assumptions about Jews, painting them all with one giant, Jewish brush. Does someone need to remind him that Jews, like all human beings, are individuals, with unique traits and qualities? 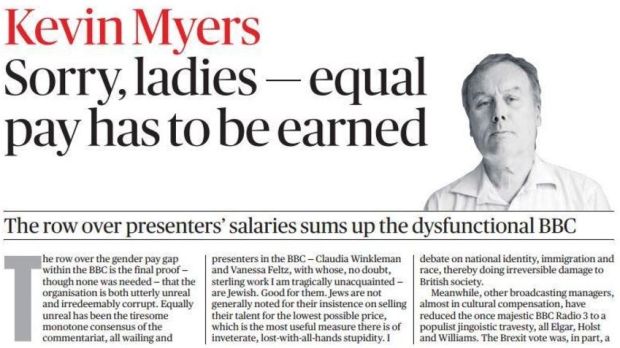 I’m also struck by Myers’ ability to list out so many of the Jewish people he has known throughout his life. It suggests that he – again, like so many others – is consciously thinking about the people as Jews and that defines his interactions with them. Rather than some personality, or even physical, trait, it is apparently the fact that they are Jewish that defines them in his eyes.

Whether or not Myers was, in his mind, intending to be racist, given that the Jewish community is clearly unimpressed with his actions, issuing a real and formal apology would be the first step to making amends.

What this controversy highlights is the need to promote awareness about this form of antisemitism, when seemingly-innocuous statements that are actually dangerous are openly tossed around, especially in the media. This, when coupled with another form of antisemitism that is rampant in Ireland (antisemitism under the guise of anti-Zionism), will only further alienate Irish civilians from learning of the reality in Israel, and further the notion – whether consciously or otherwise – that Israel is indeed guilty of the many false accusations that aim to destroy her.