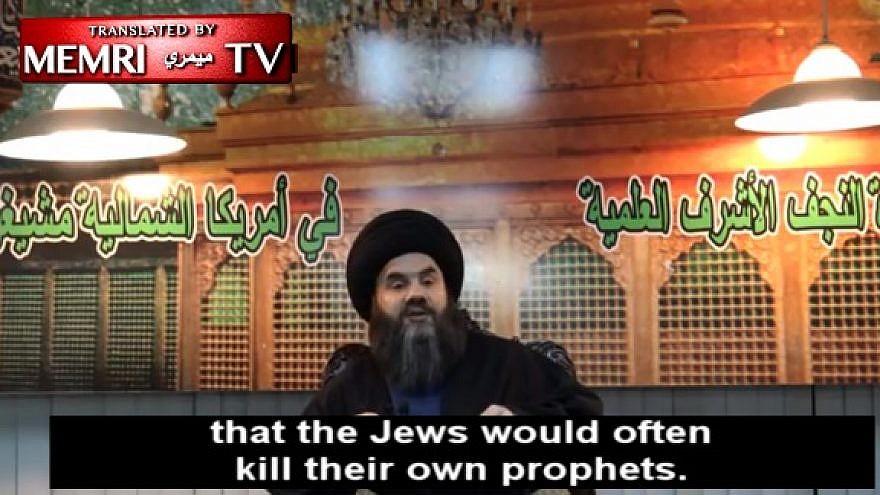 Al-Sheraa said that the Jews have distorted sacred texts and sanctioned the killing of prophets such as Jesus and John the Baptist. He accused the Jews of employing tricks and fraud in matters of religion and morality, and of amassing gold and spreading usury. Explaining that usury is a “peculiar Jewish philosophy,” Imam Al-Sheraa said that the Jews have used it as a means of attaining power, even though it contradicts their religious teachings, and that even the modern banking system is based on the Jews’ “instructions and vision.”

He further said that Jewish women have historically established and managed “dens of female iniquity” and headed the brothels of Europe, and that the Jews allow their faith to be passed down maternally so that their women could increase the Jewish population through prostitution.

Al-Sheraa is a graduate of the Najaf Hawza in Iraq. He emigrated to the United States and serves as the imam of the Al-Zahraa Islamic Center of Michigan. He also founded the Scholarly Najaf Hawza in Northern America–Michigan.

Bassem Al-Sheraa: Yahya [John the Baptist], with all his greatness and his glory, was a prophet, as was his father. … [The Jews] excommunicated him and then sanctioned his killing. He wasn’t just killed; he was declared a heretic and his head was chopped off. Jesus, son of Mary, was also declared a heretic by them. They excommunicated him. They said that he was not a Jew. Then the Romans killed him. They arrested him in order to crucify him. But it was the Jews who issued the religious ruling about it.

When the Romans wanted to arrest Jesus, they got a religious ruling from the Jews that said that he did not represent them and that he had been excommunicated. The Jews sanctioned his killing.

[The Jews] employ tricks and fraud in matters of religion and moral values. They distort [sacred texts], and therefore it is said that the Jews would often kill their own prophets. They would sanction the killing of one another. In addition, they allowed their women to engage in prostitution, God forbid. Following the [Babylonian] captivity, when Nebuchadnezzar exiled them and destroyed the Temple, the Jews said: ‘Money and women are our most powerful weapons.’ So they would amass gold and money, and they would spread usury. Usury constitutes a peculiar Jewish philosophy. … Even in the modern world, global banks are based on the culture of usury, which is a Jewish concept.

Since a long time ago, the Jews have been lending people money and collecting interest, even though it is forbidden according to their religious law. Allowing usury is one of the things they did to circumvent their [scriptures]. The Jews permitted usury and have been usurers. They are still proud of this. Look at the global banks, the billionaires. … All those are from among [the Jews]. Their culture is a culture of usury. The financial culture of the world was founded according to their instructions and their vision. Why? Because they consider [usury] to be an instrument of control.

In addition, they allowed their women to engage in [prostitution]. Pardon my language, but the brothels of Europe were established by them. Their women would manage those dens of female iniquity. Most dens of gambling, usury, and so on were run by them. They are always like that. They control people’s resources through such tricks and deception. They consider it to be a reward and a way to serve their religion. They employ these means to control rather than be controlled. So they said that the son of a Jewish woman is a Jew, even if his father is not Jewish. They even issued a religious ruling to that effect.

The Old Testament and the Torah say that a child belongs to his father. If the father is Jewish, then the son is Jewish as well, and if the father is not Jewish, then the child is not Jewish, either. But in the Talmud, the priests changed this. They said that the son of a Jewish woman is a Jew. Therefore, they sent their women around and said to them: “Go [fornicate], and if you get pregnant, bring us the children and we will accept them as Jews.” This is their way to increase their numbers.

This story was originally published on JNS.org.